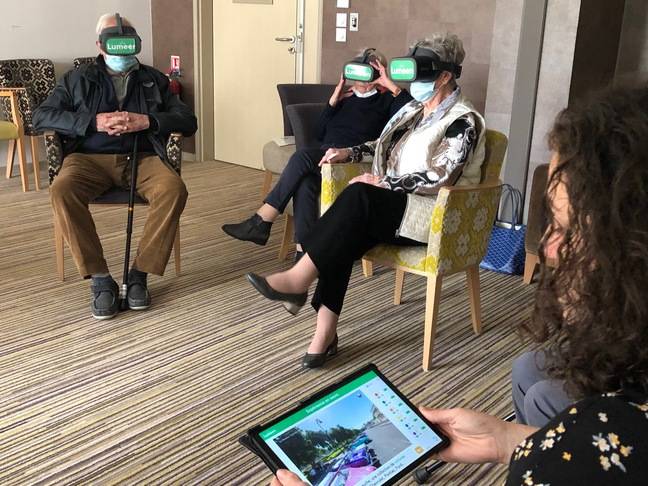 The “small ferry” has just ended in the next room. It’s time for the virtual reality at the “Silver Stars” in Oberhausbergen, a few kilometers from Strasbourg. In this non-medical residence reserved for autonomous seniors, a session with this technology is offered from time to time.

“We have a single suitcase with six helmets for the 16 Domitys in the region. Each time, it stays on site for three weeks, so everyone can enjoy it,” explains Charlotte Daas, entertainment referent for the group. This Tuesday afternoon, a small group of six retirees is entitled to it for about an hour. “We can do several courses, about 7 minutes each,” she warns again.

A helmet on the head for an immersive experience? Not enough to cool the volunteers, some of whom have already tested the novelty. The most ingenuous are still surprised when arming themselves with the paraphernalia. “Very pretty meadow,” says one of the residents, when she simply sees the credits with the logo of the company that developed the product, Lumeen.

Timidity or verbosity about this experience

The serious things start when the theme proposals are made. So, rather temples of Cambodia or visit of egypt ? The majority leans more towards the second proposition. Let’s go ! Little local music in the background and Charlotte Daas begins to read the directions on her tablet. During this time, the images pass slowly inside the helmets.

“Oh that’s beautiful! “, rejoices the talkative Irma, 93 years old, with the liveliness of a septuagenarian. Beside her, Ginette, two years her senior, is less at ease. “I’ve been there, I know,” she slips shyly when visiting the temple of Karnak. No answer in the room, everyone takes advantage of the moment. Like Michèle, 73, delighted with the trip. “It’s as if we were there! »

“My brushing is ruined but it was worth it”

Five minutes later, time for the debrief. “It makes you want to go there,” jokes a resident, before a short questionnaire to see if they have followed well. Do you know the Egyptian gods? And what is the name of the river that flows through Egypt? The answers fuse, proof if necessary that everyone has their head and their memory. Spirit too. “My brushing is ruined but it was worth it”, laughs Irma, very happy to embark now for Cuba, Havana, its tobacco crops, its old cars…

Results of the two experiences? “It has nothing to do with TV. There, it’s in 3D, we’re in it. We want it every week. It’s a change of scenery, it’s like a vacation, ”says Michèle. Opposite, Charlotte Daas promises that the equipment will soon be permanently available in the residence. Or even why not directly in the apartments, directly available to residents. It doesn’t matter for now. It is now 4 p.m. and the room is empty. Fast enough. “It’s snack time, they wouldn’t want to miss it,” laughs the host.