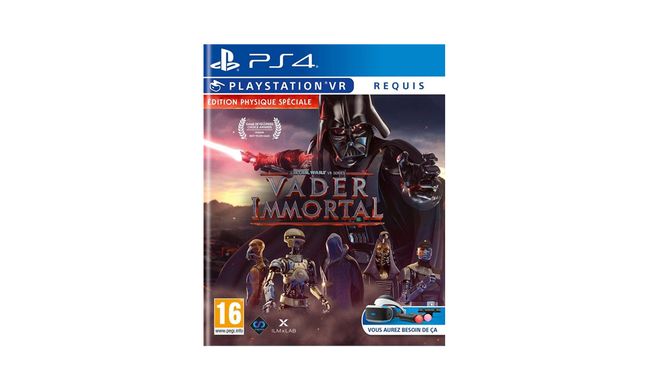 Most of the flagship licenses (Star Wars, Resident Evil, Fallout, Marvel, etc.) have their VR game versions. This selection of the best VR games of the moment can help you find your way among the many references available.

The selection of the 10 best VR games of the moment

This Star Wars VR game fulfills the wish of many players who are fans of the saga, that of fighting with a lightsaber. In a rich and detailed universe, the character moves thanks to a teleportation system. A gesture hurls the power of the Force at enemies, arriving in ever-increasing waves. Only downside: a fairly short lifespan, with a story mode not exceeding 3 to 5 hours of play.

With a scenario developed especially for him, this VR game immerses players in the Tony Stark costume. Iron-Man must face his worst enemies in a breathtaking adventure. It is possible to modify the appearance and characteristics of the armor from the garage. Some objectives take place in the air, virtual reality technology makes it feel like you’re flying. We only regret that the loading times are still too long between two actions, causing the pace of the game to be lost.

Blood and Truth: an immersive adventure game in the style of American action movies

In an atmosphere typical of American action films, this VR game portrays a solitary character wanted by gangs. Firefights and fights are commonplace throughout the storyline. Vehicle chases and helicopter battles add immersion and adrenaline. A soundtrack was specially created by Eyez and Zdot. However, the intensity of the actions can sometimes cause nausea to people inexperienced in virtual reality.

The Walking Dead Saints & Sinners: a shooter in the gore style of the license

This VR survival game facing a horde of zombies respects the details of The Walking Dead series and books. The player can find — and even craft — weapons to complete his quest. Working exclusively with the PlayStation VR headset, this survival horror game benefits from 3D audio technology. However, this gory and immersive VR game is not recommended for young audiences and/or sensitive people.

This open world VR game resumes the main story of Skyrim, already released in classic version. This fantasy epic reveals significant character customization in order to advance the story. Between combat and exploration, this RPG game offers an immersive main quest and several secondary quests. All 3 expansions Dawnguard, Hearthfire and Dragonborn are included with the original game. Only downside: 100% porting of the main game, without any additional content.

This racing game for PS4 works in classic system as in VR, subject to having the official helmet of the brand. Two game modes meet the needs of car racing enthusiasts, with a full story mode and a multiplayer mode. The main endurance races and renowned tournaments are represented. Too bad for the slight loss of graphic quality when using in VR.

Released a few years ago in classic version, the game Fallout 4 is one of the last of the license to have won over its audience. The VR version offers a complete immersion in the abandoned or invaded lands of the Commonwealth. Weapon and armor customizations improve character level. Only downside: the grip, tedious for those uninitiated in VR.

Resident Evil 7 Biohazard: a new character and a first-person view

This Resident Evil VR game can also be played in classic version, in case of absence of the PSVR headset. The dark universe of the license is found in the rooms and the characters. Unlike other games in the license, this reference includes a first-person view and a new character. Stress, nervous fights and violent scenes respect the recognizable style of the license. However, these characteristics require getting used to and/or having a good heart during the game.

No Man’s Sky Beyond: an improved version of the original game with new content

This VR-enabled game has additional content to the classic version. It can be played in VR with the dedicated PlayStation headset, or in normal with the controllers. Graphical improvements and new game modes help rediscover the original game. If necessary, it is possible to play in multiplayer and integrate up to 3 players online. Only downside: a fairly complex customization menu to learn.

Doom VFR: the reference of the FPS game in virtual reality

Considered the flagship license of the FPS game, Doom returns in a VR version. Retaining the codes that contributed to the success, this FPS game in VR allows the player to face hordes of monsters and zombies in waves. The nervous gameplay adds immersion, as well as certain scenes of violence. We only regret the presence of some graphic bugs.

How to choose the best VR game?

Many universes are represented in VR games, from the most childish to the most disturbing. In addition to the characters and atmospheres, a VR game is chosen according to the player’s habit. This total immersion technology can cause a feeling of discomfort depending on the intensity. It is strongly recommended to gradually test a gameplay in VR, to accustom the brain to the movements seen, but not done (eg climbing a climbing wall, teleporting from one room to another…).

Does a VR game always cause nausea or dizziness?

Unfortunately, VR technology can easily cause nausea and seasickness. The brain requires time to adapt to understand that the gesture performed virtually is not real. After this grip, nausea and feelings of discomfort are gradually reduced most of the time.

Whatever your favorite universe, there is bound to be a VR game to suit you. Don’t forget to check the age requirement and the space available in the room to take full advantage of the technology.

Content offered by our tips experts, partners of 20 Minutes. The editorial staff did not participate in its production. The prices mentioned in this article are indicative and are subject to change.
Some links in this article are affiliate links, which may use tracers to enable 20 Minutes to receive a commission in the event of a purchase on the partner site.