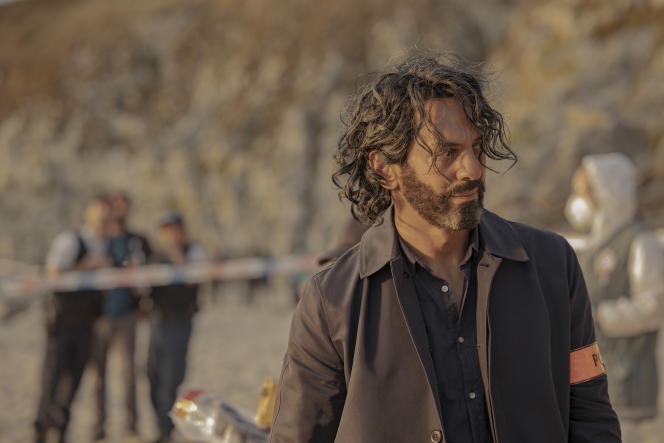 We are in 2025. Bercy refuses nothing to the Ministry of the Interior: police stations are equipped with virtual reality devices that allow them to explore crime scenes, every detail of which has been scanned by intelligent drones. In one of these dark rooms, at the Brest police station, where he is investigating the death of a woman whose body was found on a nearby beach, Ludovic Beguin (Tomer Sisley), a disheveled commander, finds his wife, Mélanie (Camille Claris), disappeared a quarter of a century earlier in the same place, and yet very much alive. The couple defeated by death are caught in an inexplicable (which will remain unexplained until the last episode) tearing of space-time, here called “vortex”, which allows them to establish a connection between 1998, a few days before the death, apparently accidental, of Mélanie, and 2025.

Elsewhere – far from the French public service – this fantastic postulate could have generated a sentimental melodrama, a comedy of errors, a temporal puzzle made up of paradoxes. Vortex Although free from the rules that govern our universe, it is nonetheless subject to the law which requires that fiction obey the code of criminal procedure, in a society where the majority of the working population is dedicated to maintaining the order and the administration of justice (Mélanie Beguin was an examining magistrate).

Vortex will therefore be essentially a thriller, and we will see the silhouette of a serial killer appear. The format of the television investigation, with its false leads and its obviousnesses which one senses well before the characters, is barely subverted by the interventions of the characters over the course of time. At regular intervals, our hero discovers that his reality has changed as a result of one of his wife’s efforts to escape a fate that, unsurprisingly, is not so accidental. Major Beguin, to whom Tomer Sisley lends an adolescent air alternately bewildered or saddened by the world of grown-ups, then questions his colleagues about their marital status, about the state of the investigation, without them are beyond measure surprised. They just suggest that he has dementia praecox, before the police routine resumes its course.

In this constantly renewed police station, the romance struggles to blossom. The time-traveling policeman is dizzy between the ghost and his living second wife, Parvana (Zineb Triki), between the child of his first marriage and his little boy. This torment is not much more convincing than the strange method of investigation developed by Commander Beguin. Except – and what follows divulges – at the end of these six episodes, when a violently tragic conclusion emerges, which suggests another version of Vortex, dark, moving, complex rather than complicated.

You have 7.65% of this article left to read. The following is for subscribers only.

“Vortex”, on France 2: after his time travels, Tomer Sisley makes an eternal return to the police station