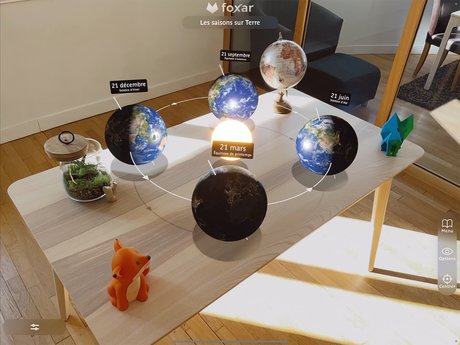 All students in a class are not in the same boat when it comes to visualizing an abstract concept of science or mathematics, even less for a kinematic diagram or a volume flow formula… The solution of Foxar helps bring everyone back to the same level of understanding through the use of augmented reality to visualize animated and interactive 3D models. A tablet in their hands, students, from primary to high school, can thus simulate the appearance of images as if they were actually in the middle of a class, thus allowing, for example, to turn around the system Solar or the different phases of the moon, but also to unroll a fraction, present the volume conversion table, reveal the structure of the material, but also to display full -scale pictorial works such as “La Joconde” or “Guernica “.

For three years, the start-up has partnered with laboratories specializing in cognitive psychology and volunteer teachers to co-design this innovative content. About sixty models are already available on all types of media. “ Our app has already been downloaded 100,000 times, mostly by schools “says Louis Jeannin, president and co-founder of Foxar.

Primary objective: to have a positive impact on society

The young shoot has landed a contract with Dijon Métropole which begins at the start of the 2022 school year and for a period of four years. About fifty schools will be able to experiment with augmented reality in their classrooms. ” And for schools that do not want to wait for their community to get involved, they can take out a subscription of 49 euros per year to access all the models that support the school program “says Louis Jeannin.

Some important models in the primary in particular, will remain in free access to democratize this technology. ” This new form of illustration reduces the gap within groups “says Louis Jeannin. In other words, those who had difficulty visualizing a concept progress faster than those who had less difficulty.

A satisfaction for the entrepreneur, for whom the first motivation to create models in augmented reality is to have a positive impact on society. But the latter had not imagined the full potential of his solution for the economic world… 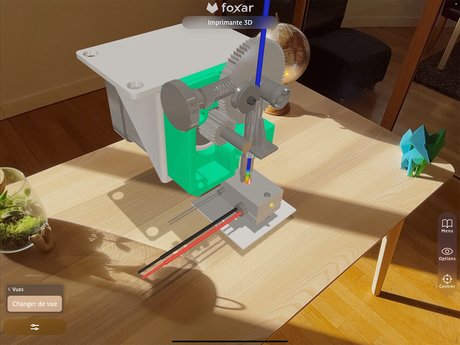 From national education to vocational training

At Enedis, for example, technicians were previously trained in the maintenance of electrical panels, present in all the cities of France, from the classic documentation, that is to say on handouts…

” The fact of having developed a model [3D en réalité augmentée] of the electrical panel allowed the trainer to explain the points of vigilance in a more visual and interactive way, and even to change the point of view. What you can’t do on paper… », explains Louis Jeannin.

The surprising path of diversification towards industry

The young shoot, which now has four employees, has also benefited since its launch of the support of the factory, the regional pole based in Chalon-sur-Saône, dedicated to the digital transformation of companies, which served as a ramp launch and incubator.

In this emerging market, competition is not yet high. ARGO, for example, creates augmented reality experiences from documents in PDF format.

But, underlines the co-founder of Foxar, “cWhat makes us different is that we specialize in education and graphic quality. We show realistic models, and we can add interactions by going very far in the tailor-made “. Continuing his demonstration, Louis Jeannin quotes this industrialist from Chalon-sur-Saône who manufactures rolling bridges. The company sent its prospects in Europe physical models of … two meters high.

” Thanks to our solution, they can send the link to the model in augmented reality and project it directly in their own factory, moving it and making it work », explains Louis Jeannin.

Territories that are renewing themselves in the face of the crisis

Virtual reality: with its 3D models that facilitate the teaching of concepts, Foxar interests the industry