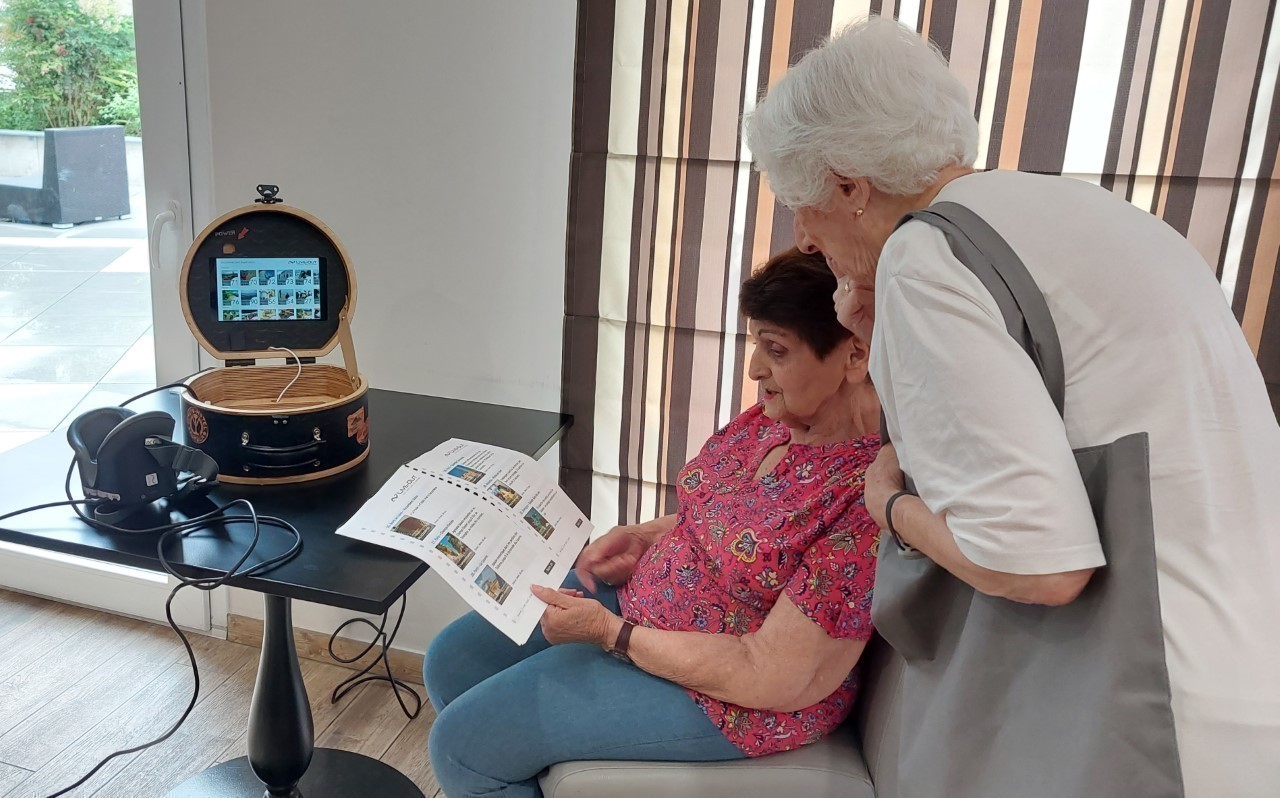 “Oh remarkable, I returned to Reunion. (…) I felt like I was on the sailboat. And to be on every side of what the helmsman was doing. It was really very very nice. I saw a lot of things”, testifies Juliet, 89 years oldremoving VR (virtual reality) headset.

This octogenarian from the senior residence of the Heurus group, in Nantes (Loire-Atlantique)relived his memories at sea with his father. “We fished a lot of mackerel at the time,” the resident told News Nantes.

Walks in Greece, the Piton de la Fournaise, the forest of Brocéliande…

Juliette is not the only one to have traveled outside the walls of her residence to relive memories through landscapes or even discover new places. Walks in Greece, at Piton de la Fournaise (Reunion), passing through the forest of Brocéliande (Brittany), are among the possible escapes.

The facility for seniors has been testing this 360° virtual reality headset for more than a month, connected to the company’s PanamaBox Live Outcontaining over 120 experiencesto which are added three new ones per month.

The virtual concept aims to stimulate the cognitive energy and sensory interaction of residents, such as those affected by Alzheimer’s diseaserelying on the mechanism of reminiscenceor the return to the mind of a memory not identified as such.

Indeed, memory is often declining after a certain age. And cognitive disorders, associated with the aging of the population, would be more and more frequent. 225,000 people are diagnosed Alzheimer’s disease or another related disease, each year, according to National Institute of Health and Medical Research (Inserm). Knowing that 16% of octogenarians and 41% of nonagenarians are affected, according to the NGO Alzheimer Europe.

And their number could increase since in 2060, the over 85s will represent 5 million of the population against 1.4 todayaccording to the Ministry of Solidarity, Autonomy and People with Disabilities.

“Our societies are not prepared”

Vincent Gérard, the founder of the PanamaBox, therefore decided in 2015 to develop sensory animation for the elderly, in order to entertain and stimulate an audience that goes out less and less.

It’s complicated to develop offers directly addressed to the elderly. Our societies are not prepared. Today, the treatment of the elderly is discriminatory.

A very concerning subject for Vincent Gérard, in his forties, who says he has always been in contact with death and the elderly. “I lost my father when I was 10 years old. So who takes care of you during the holidays? Well it’s your grandfather with whom you have a special relationship. After that, I had a lot of friends who were 80 years old,” says the founder.

So to develop his idea, he joined forces with the cognitive psychology laboratory at the University of Rennes between 2017 and 2018. Today, he works with Rennes University Hospitaland in particular with a environmental psychology researcher to imagine the solutions of tomorrow.

Could the PanamaBox therefore become a therapeutic tool ? This remains to be demonstrated, replies the founder to News Nantes.

To say that we are going to treat age and the diseases that follow (like Alzheimer’s, Editor’s note), I don’t believe in it in the current state. (…) We are in search of effects and appeasement.

come out of the silence

And that seems to be working. Vincent Gérard says that thanks to this experience, the elderly sometimes come out of silencestart talking about themselves, or find a forgotten memory.

This was the case of a former skydiver who was part of a commando. But the latter had never jumped. “He had major memory problems,” explains the founder.

Thanks to Live-Out’s VR headset, he was then able to experience a skydiving in Reunion. “We had a strong emotion. It opens up huge perspectives. Today, we have all put things aside, but we can relive them, ”he wishes.

“It contributes to living well”

Another example, a former helicopter pilotin another residence, was able to drive a machine again thanks to the PanamaBox.

He didn’t talk much and after that he became someone. People don’t brag about their lives. And this tool can reveal parts of their personality. It contributes to good living and it allows you to get to know yourself, to tell your story.

In the establishment for seniors in Nantes, residents are now several to have tested the virtual reality headset. One of them is already a big fan. I saw the forest of Brocéliande, I went on an old boat. I saw the Piton de la Fournaise…”, he lists.

Today Live-Out Team 300 customers, 150 establishments in France: senior residences, nursing homes or even protected units. “The idea is to equip all the establishments,” says Vincent Gérard. But not only. Individuals also use it at a family reunionmixing the generations.

Was this article helpful to you? Know that you can follow Actu Nantes in space My News . In one click, after registration, you will find all the news of your favorite cities and brands.

VIDEO. Thanks to virtual reality, these seniors find their forgotten memories