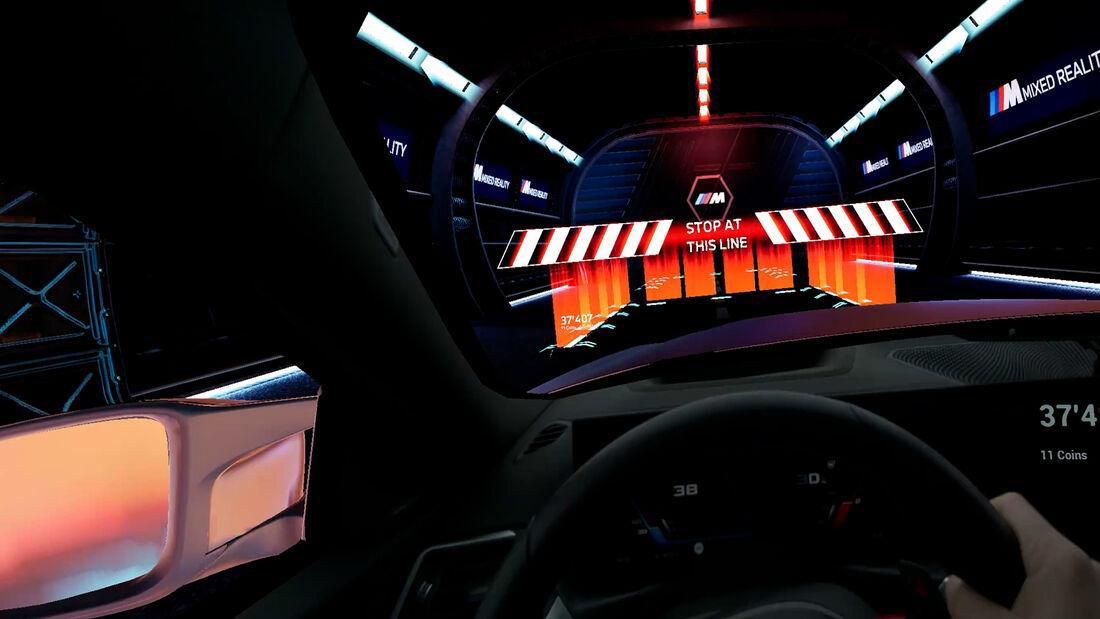 Is it possible to drive a car safely while visually in a pixelated world? We tried the experience at the wheel of a BMW M2.

The internet is full of videos showing people throwing themselves headlong into the action with virtual reality headsets on their heads. By immersing themselves in virtual reality, many lose, in part, control of their bodies and go straight into the wall, run into televisions or fall downright backwards. What is hilarious to the viewer is often painful, and can be costly, to the VR user. Which begs the question: how will we do the day car manufacturers use car windows as screens – because that’s what they intend to do, inside and out. . Is it possible that we are then driving the car in some kind of video game, when in reality it is moving safely through road traffic?

Questions that also plague BMW, which has instructed its M GmbH sports department to explore this area by judiciously integrating augmented reality (AR) and virtual reality (VR) for future applications. This gave rise to the “M Mixed Reality” technology which now equips a BMW M2 equipped accordingly. A vehicle has thus been developed in collaboration with Epic Games, thanks to which it is possible to immerse oneself in virtual reality while moving in the real world.

It’s as crazy as it sounds and the only way to better understand how it works is to try it yourself. To do this, the M2 was made available to us on a testing ground. The long and very wide take-off runway of a former air force airfield is ideal for this. So, we board, we put the VR helmet on our head and we tighten the four-point harness! And already, the excitement is turning into nervousness. How is this supposed to work?

We set off slowly on the long track; For now, the VR headset is still set to “transparent view”, but not for long. The BMW engineer on the passenger side, who is obviously not wearing a VR headset and who has pedals on his side, in case of emergency, taps on his laptop and suddenly we are immersed in a virtual world. On the virtual track, it is dark and you can see buildings lit up in the background. But we are not here for sightseeing! Let’s go! A computer voice gives the instructions which consist in traversing the circuit as quickly as possible while avoiding the obstacles and collecting the coins which offer bonus time. The countdown is on, the starting gate opens, and let’s go!

The doubts fly away

We start with a first lap at moderate speed. The instructor gives a few brief instructions that you can do without, because you get used to this virtual reality surprisingly quickly. This is explained in particular by the fact that all axes of movement and rotation of the M2 are taken into account by the system. During the second lap, the last doubts disappeared and we put the gas. Take the bend without deviating from the trajectory, collect coins, avoid a closing gate: like in a video game, the ambition to master everything while going as fast as possible is quickly felt.

How quickly you get used to this type of driving is amazing and, in a way, frightening. Does this mean that we will soon experience pixelated daily road traffic? BMW does not yet have a concrete answer to this question – it is first a question of showing what is already possible. “It’s the answer to those wondering what future virtual experiences in the automotive sector will look like,” says M boss Frank van Meel. “People need to be able to experience and feel this new feeling – and we offer them a suitable solution for this with M Mixed Reality”. By the way, mixed reality technology has already been used in the automotive sector for a long time: like BMW, many other manufacturers use augmented reality for the development of vehicles between teams. Virtual reality is used in particular for the planning of production processes. And in cars, there is already the head-up display, which projects navigation indications by means of augmented reality. But what will be the next step?