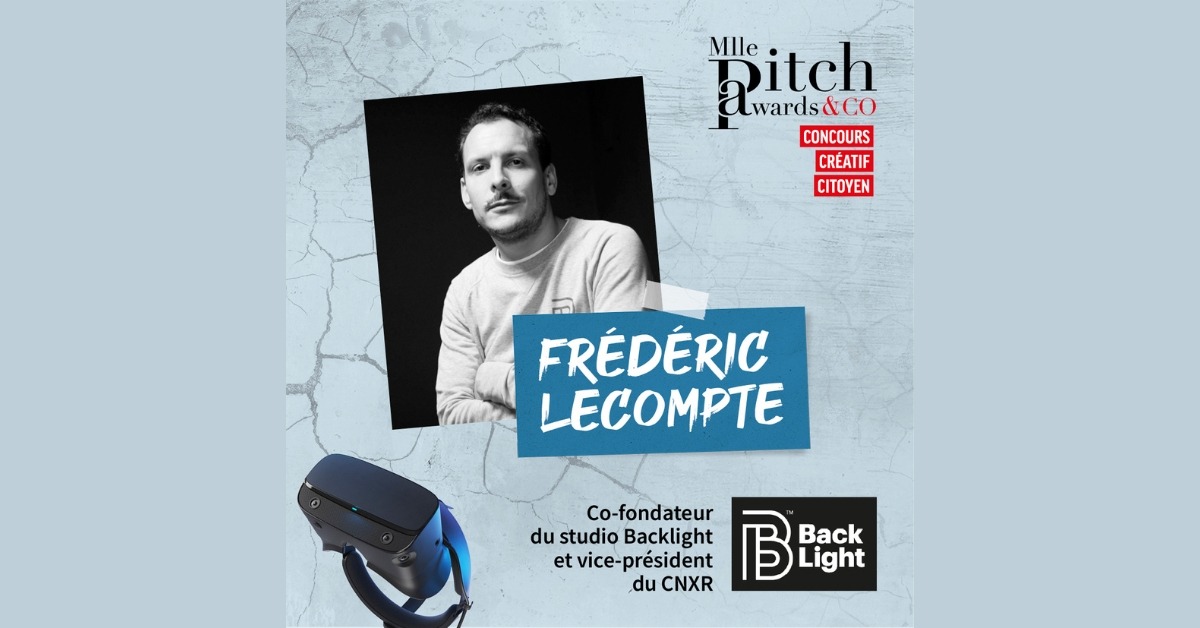 This 3rd edition of the Miss Pitch Awards & Co is distinguished by the opening of a new XR category. Thus, a jury and special partners are dedicated to it, which promises an additional field of expression for the participants. The primary objective? Ensure that solidarity communication and its struggles can reach as many people as possible. And this, regardless of the media deployed!

Recognized professionals and experts make up the XR jury!

The sponsor of the XR jury, Frédéric Lecompte, Co-founder of Backlight and Vice-President of the CNXR (National Council of XR) will be accompanied by professionals all experts and recognized in the VR industry. Indeed, in 2008, Frédéric Lecompte and his partner Jonathan Tamene created BackLight. A CG animation studio at first before diversifying by integrating new technologies. Let us cite the example of Augmented Reality in 2010. Or Virtual Reality in 2014.

BackLight is one of the pioneers of immersive creation in France. Focused on the development of the studio, Frédéric Lecompte has a unique perspective of the VR market. This, both in the field of entertainment and in that of brand content. In the spring of 2022, he was also elected vice-president of the XR National Council (CNXR).

Now that you know the sponsor of the XR jury, here are all the members.

Serial entrepreneur, Alexandre Ibanez is passionate about science and new technologies, mainly immersive. He regularly intervenes on these subjects with the National Assembly, MEDEF, Laval Virtual, or even the French Institute. In 2016, he co-founded VR Connection! This is a group that includes a publisher of distribution platforms dedicated to managing immersive content. But it is also an Economic Interest Grouping made up of more than a hundred content production studios. Finally, let’s mention that Alexandre is also co-founder of the CNXR.

Michel REILHAC is an independent author, curator and producer of interactive narration and virtual reality. Since 2016, he has been the founder and curator of the official international competition for immersive content Venice VR, as part of the Venice Biennale, for the Venice International Film Festival.

Content specialist, Marina returns to train on the benches of the Gobelins school in 2017. And this, to specialize in the design of immersive experiences. UX design techniques are at the heart of his reflection for the creation of specific courses relating to 360 video, AR and VR. After leading, as Chief XR Officer, the PrismaXR Lab at Prisma Media, she joined Microsoft to carry product communication, including the Hololens holographic helmet. Today, she joined the Lab de France Immersive Learning as communication manager.

Olivia is the founder of La Méduse Viollette, an immersive storytelling agency. She is also the co-founder of Metamorph Studio, which specializes in video games. With these two structures, Olivia creates content for Edtech and produces educational devices. These educational worlds to experience are based on an innovative pedagogy integrating storytelling and video game mechanics. They are built to help all learners, depending on their profile, to learn what they need. And this, at their own pace, in a personalized way and in the best possible conditions.

Director of animated films and graphic designer, he co-founded in 2012, Atomic Digital Design, with Antoine Vu, of which he became Creative Director. Atomic Digital Design is the specialist in mobile augmented reality and imagines, designs and manufactures filters in augmented reality found on Snapchat, Instagram, Facebook and more recently TikTok. The French company works with the greatest! Let’s mention Adidas, Coca-Cola, Citroën, Dior, Lacoste, Lancôme, Piaget, Ralph Lauren… or even the two rappers from PNL.

Mathieu is a computer and technology enthusiast. The smartphone was the product that made him want to help out on forums and post articles. But also to create videos on many media and to take the reins of two Andromag television shows and the mobile studio on OUATCH TV. In 2016, he decided to launch his Youtube channel “ Stay Connected “.

The same year, he discovers virtual reality and since that day, he observes the evolution of different immersive technologies. With a group of enthusiasts, they founded the web TV ETR. He hosts a live XR360 show there every Monday at 9 p.m. on Twitch (ETR_FR), and on his Youtube channel. He presented the first Francophone VR Awards with this team and many video game players.

Maxime is the founder and president of Creapills and of The Pill agency. He has been evolving in the world of media and creativity for more than 10 years. Creapills has positioned itself in 8 years as the leading French-speaking creative medium with more than 2.5 million unique visitors per month, and more than 5 million subscribers on social networks. Creapills highlights the creativity of brands. But also those of artists and other creative people from all over the world. The goal ? Encourage everyone to be inspired. In 2021, the Creapills media totaled more than a billion views on Facebook alone over the year.

Maxime now oversees the development of the creative agency The Pill, which supports companies in search of creativity.

At 24, Nael finds himself projected to the position of manager at FIL (France Immersive Learning). And this, with the aim of animating the largest ecosystem of French immersive learning players. His goal ? Develop, federate and shake up the codes of the immersive technologies sector. Inspired by very diverse backgrounds, such as extreme sports for which he organized the ” Hooked », Tricking World Championships. Or even culture, by organizing the Hispano-American festival “ Paris never ends “.

He is now committed to renewing the codes of professional events to offer an unparalleled experience to members of France Immersive Learning. He did not hesitate for a single second to take his place on Miss Pitch’s jury and to get involved in societal and public health issues.

In addition to the sharing of the 14,000 euros between all the winners in each category, the XR category features renowned partners who will provide award-winning XR with hardware and visibility for winning experiences. Immersive technologies – also called XR (virtual, augmented and mixed reality) – are recognized as being fabulous vectors of empathy. By putting them at the service of NGOs, like this year Médecins du Monde, the Mlle Pitch Awards & CO stands out as THE creative, ethical and innovative competition for great causes.

Frédéric Lecompte, Co-founder of Backlight and sponsor of this category, underlines : ” Indeed, through these new media, we no longer receive a message, we live it. The spectator plunges into the subject, this is where the strength of immersion lies. Add interaction and you will link theory and practice in the same medium”. He keeps on : “Immersion promotes interest as well as concentration, increasing tenfold the memorization of messages “.

One more media is deployed!

With this new XR category, the Miss Pitch Awards & CO are using one more medium to promote the noble causes supported each year by this contest. As Frédéric Lecompte points out: “ It is important to understand that it is not the technology in itself that generates empathy or emotion, but the use we make of it, the subject we wear and the different choices to deliver the message. Creativity is therefore essential to engage the viewer and imbue it with the positioning of Médecins du Monde “.

Magali Faget, founder of the Mlle Pitch agency and creator of the competition, Mlle Pitch Awards & CO, says: ” We live in the digital age where the virtual and physical worlds are converging. It was therefore very important to include XR technologies in the competition. Indeed, these technologies will make advertising evolve, towards hyper-personalization. And this, thanks to digital screens that will send unique advertisements through sophisticated digital devices, when we walk and/or pass in front of specific areas. “.

Note that this national publicity contest, citizens is free and is open to freelance professionals and/or students. The appointment is given to all schools offering XR / Metaverse / gaming training… to have their students participate in this competition, whether or not integrating it into the educational curriculum. Registrations are also open. Then just access the dedicated website to download the brief!