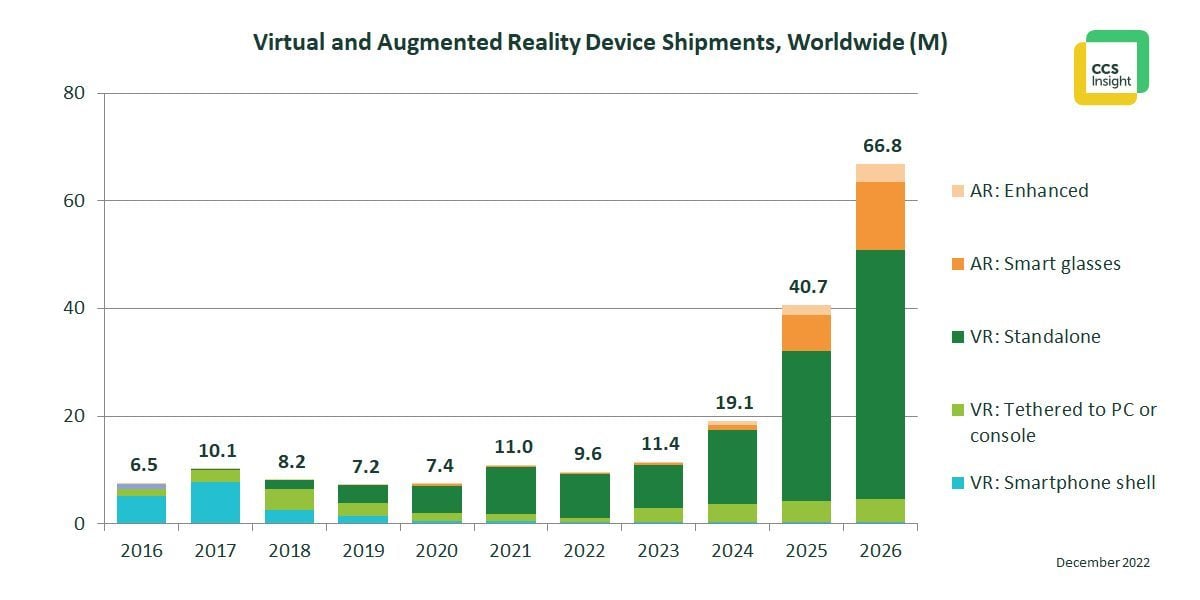 The metaverse makes a laborious start. This year, sales of virtual reality headsets have fallen sharply. Despite the eagerness displayed by Meta, the general public remains indifferent, but the deal could soon change.

The metaverse is struggling to take flight. Despite the gargantuan budget released by Meta, Internet users are sulking Horizon Worlds, the online world accessible through a virtual reality headset. At the latest news, the metaverse of Meta does not cumulate than 200,000 users monthly assets, far from its initial objectives. Even Meta employees are not convinced by the great obsession of their CEO, Mark Zuckerberg.

Rival platforms, like The Sandbox or Decentralandare also struggling to grow their user base, in part because of the cryptocurrency crash. Despite the ambitious projects launched by brands in 2021, the metaverse did not appeal to Internet users in 2022.

Sales of virtual and augmented reality headsets in 2022 confirm public indifference for metaverses. According to data collected by CCS Insight analysts, sales of VR headsets fell by 12% worldwide between 2021 and 2022. Only 9.6 million accessories were sold this year. Last year, the VR headset sector had gained a lot of popularity. According to IDC, 11.2 million copies were shipped worldwide, up 92.1% year over year.

Despite the excitement generated by Facebook’s name change, the virtual reality headset remains a niche product. It has not yet managed to convince the vast majority of consumers. Price remains a major barrier to adoption, says CCS Insight analyst Marina Koytcheva, especially in times of economic crisis:

“Inflation has hit consumer budgets in many major markets this year, and some people, who under better circumstances would have purchased a VR headset this year, have postponed their purchase”.

Released in 2020, Meta’s Quest 2 headset remains the best-selling device on the market. Unfortunately, the increase in the price of the accessory significantly slowed sales. This summer, the starting price of the helmet has gone from 349 euros to 449 euros. Even more upscale, the Quest Pro is aimed primarily at businesses and professionals. Proposed at 1,799 euros, it does not aim to accelerate the adoption of mixed reality.

The decrease is clearly less marked in the United States. The research firm NPD Group recorded a drop in sales of only 2% in one year. The US market proved to be more resilient. The “Meta Quest” application was also the most downloaded application on the App Store at Christmas 2022, as at Christmas 2021.

In its annual report, CCS Insight is not much more optimistic for next year. Analysts expect 11.4 million mixed reality headsets to be sold in 2023 worldwide, barely more than in 2021.

Despite lazy beginnings, the VR/AR headset sector will eventually take off, prophesies CSS Insight. Sales are expected to start climbing from 2024. The firm expects the equipment rate triples between 2024 and 2026. Several events should boost consumer interest in the years to come.

Let’s quote first the almost messianic arrival of Apple on the market. From 2023, the Cupertino giant should market its first mixed reality headset, and launch its own metaverse. According to analyst Ming-Chi Kuo, Apple’s foray will reshuffle the industry cards. Demand for games and immersive experiences is expected to explode on the heels of the announcement, Kuo said. The release of PlayStation VR 2, the PS5’s VR headset, is also expected to boost sales in the near future.

In a second time, the arrival of augmented reality glasses should contribute to greater adoption by the general public. By 2025, a significant portion of devices sold will be AR glasses, the report notes. The number of glasses in circulation should double the following year.

According to the latest news, Meta plans to launch its first AR glasses in 2024. Forced to cut costs, the group postponed the launch date. As a reminder, Meta collaborates with the Ray-Ban brand for make the accessory as discreet as possible. This approach aims to appeal to the general public. From 2026, Apple should also enter the augmented reality glasses market with the highly anticipated project ” Apple Glass “. Here again, the entry on the scene of Apple should provide new impetus to the sector.

The metaverse is not taking off: sales of VR headsets are collapsing