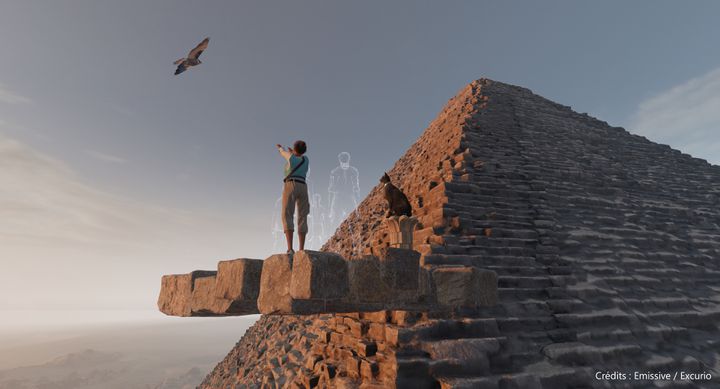 Before entering the exhibition The Skyline of Cheops presented by the Arab World Institute until October 2, 2022, you must get rid of any bulky objects. Bags, sweaters and other trinkets are put away in the closet so that you have your hands free for this stroll almost as real as life in the heart of one of the seven wonders of the world, the pyramid of Cheops.

First mission, save your avatar. It comes in the form of a large man made up of thousands of blue pixels. Some are enthusiastic when choosing their pseudonym: the so-called “Flame” shamelessly rubs shoulders with a more classic “Isabelle”. Visitors don connected black backpacks. Futuristic look guaranteed. “Looks like a ghost hunter”, exclaims a young boy with long hair, ready to begin the experiment.

He puts on his prominent virtual reality helmet and his vision blurs. When his father – devoid of equipment and not recognizable by his son’s camera – tries to take a picture of him, the child does not even know where to look. “I do not see you anymore”, he yells. Logically, the helmet has already propelled him into another dimension. “In front of you, you should see a starry sky”, says one of the organizers. Black peaks surrounded by a sky with purplish hues are then revealed at 360°.

The safety instructions are activated in a mini loudspeaker integrated into the helmet: when the visitor approaches a wall, a red grid appears to encourage him to turn around. He must follow the blue lines that appear on the floor of the Egyptian desert. From the first steps, calm sets in and the other participants immediately transform into silent avatars. Quickly, the huge pyramid is discovered under the rays of a beautiful sunset.

Mona, a dynamic virtual guide, welcomes visitors and launches the start of the ascent of the pyramid aboard a flying platform. Distrust for the sensitive of the inner ear: the ground moves away little by little until reaching the entrance of the building – a breakthrough dug in the 9th century – at 16 meters in height. Difficult to concentrate on the first information given by the young woman as the images and sensations are impressive.

Inside the building, the cavities are narrow and sometimes require you to bend down or even squat to go from one room to another. Several explanations punctuate the visit: the method of transporting the rock blocks, the Cheops chamber containing his sarcophagus and the structure overlooking his entrance. But in the middle of one of the speeches given by the guide, the power goes out and a mysterious cat – incarnation of Bastet, the goddess of the hearth – appears in a luminous halo.

Thanks to it, the visitor explores sites usually off-limits to the public, such as the Queen’s bedroom. A portal between the present and the past, the feline takes participants to the top of the pyramid for a breathtaking panoramic view of Cairo and the Giza plateau. A few minutes later, they sail aboard a boat on the Nile towards the funeral of Cheops which took place 4,500 years earlier.

Embalming, mummification… Every detail has been meticulously thought out by the French company Emissive behind the exhibition. She has also collaborated with Peter Der Manuelian, Egyptologist, archaeologist and epigrapher specializing in the study of mortuary architecture. The researcher guided them in the historical reconstruction of buildings and rituals, such as during the funeral of Pharaoh Cheops where the visitor witnesses the entire service.

In total, three years of research and development were needed to create this course over more than 500 square meters. This is the second time that the company has been hosted by the Institut du monde arabe, since in 2017 it presented The Enemy directed by photojournalist Karim Ben Khelifa. People were confronted with three armed conflicts – Israeli-Palestinian, Republic of Congo, El Salvador – in virtual reality.

After 45 minutes, the tour ends. It’s time to return your equipment. Visitors discover with surprise that their hair-raising walk in the belly of the pyramid actually took place in a huge room with colorful walls. There is something comical in seeing others still caught up in the magic of computer graphics. The little boy encountered at the start of the exhibition zooms by, his helmet in his hand, his breath short. He ended his visit prematurely: for him, he had “really too many sensations”.

“The horizon of Cheops”: a breathtaking journey in virtual reality in the heart of the pyramid of the pharaoh of ancient Egypt