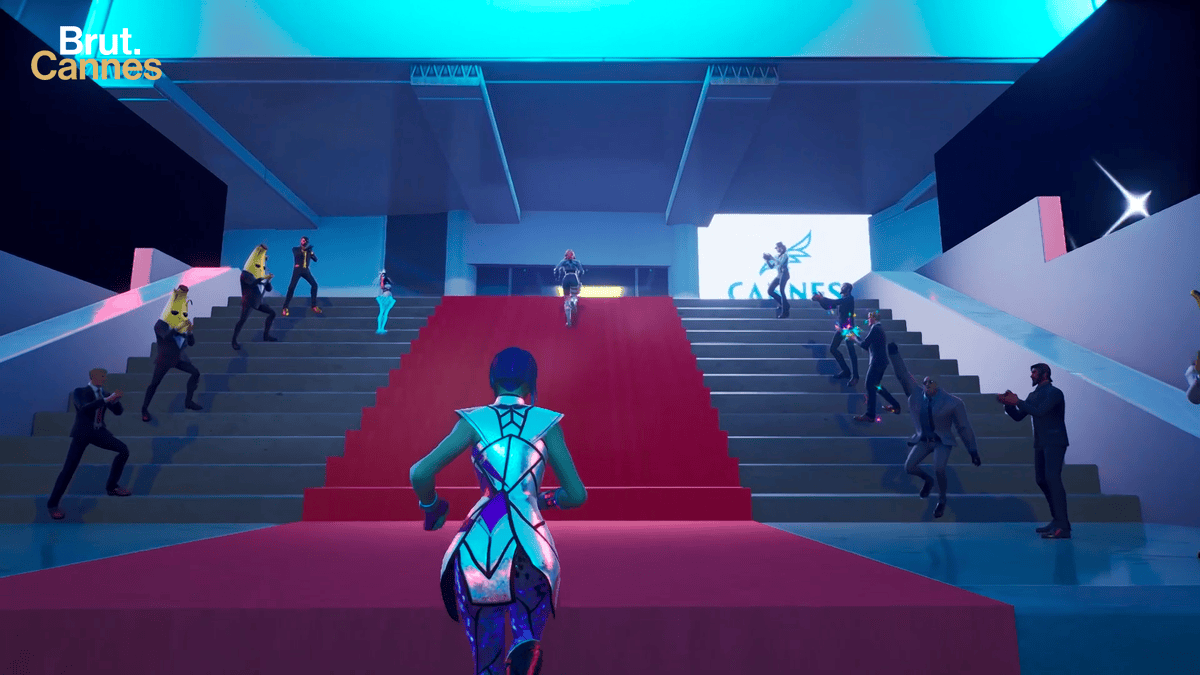 Thanks to the online media Brut, the biggest festival in the world comes in a 100% virtual version in the colorful world of the video game of Epic Games.

We are still a few days away from the opening of 75and Cannes Film Festival and yet, for us, the festivities have already begun. We’re even already on the red carpet, posing while climbing the stairs, under the crackling flashes of the photographers… OK, we admit it, we’re actually testing the concept of the new Festival partner, the digital media Brut, which created a 100% virtual version of the world’s largest film festival in the Fortnite universe.

Allow everyone to experience the festival

Forget the famous Battle Royale mode, the shooter and survival game version of the phenomenon developed by Epic Games because we are interested here in its Creative mode, which allows any fan to set up his own universe, with his own rules. There are thus all kinds of maps to explore alone or with friends: labyrinths, parkour, reconstructions of Mario Kart or Call of Duty… And from May 17, the date of the official opening of the real Festival of Cannes, we will therefore be able to interfere in the universe of the high mass of the 7and art via Fortnite, as if we were there.

“The idea was to allow young people around the world to experience this festival from the inside, explains Adrien Torres, Brut brand manager and co-director of the Fortnite project, and video game platforms are perfect ways to engage this generation”. All accessible from a computer, console or smartphone. The good news is that iPhone fans will also be able to play it since the game has recently been released. back in the Apple ecosystem.

In the skin of a journalist, an actor or a director

Arriving on the Brut map, the player will be able to play three different roles: first a journalist, then a director, and finally an actor, with for each of them a very specific quest to accomplish. “Journalists will have to start by getting their accreditation, for example, then prepare an interview and film images for a report, continues Adrien Torres. The actor will have to defend his first film and audition for a future project, while the director will seek to finance his next feature film, while accompanying the screening of his film on the red carpet.

The Vysena studio, a specialist in creating maps under Fortnite Creative, and renowned for its reproductions of real elements, was responsible for developing the playground.

“Our creators struggled to reproduce 600 m of the Croisette in real size, explains Robin Aleman, studio sales director. The Palais des festivals, the famous steps, the small adjoining park and the path of the Croisette are thus very faithful reproductions of reality. For reasons of time, we were not able to contact all the holders of the rights of the buildings along the seaside to reproduce them in an exact way but we were strongly inspired by it”.

Indeed, as a fine connoisseur of the place, we find ourselves on familiar ground, particularly around the Palais des Festivals. Afterwards, we stay of course in the universe of Fortnite, with a somewhat “cartoon” aspect and graphics that are not necessarily very realistic. However, an essential element of the festival is missing: the effervescence of this formidable microcosm. The crowd that presses around the big hotels to watch for the stars, the procession of limousines bringing the stars in front of the red carpet, the thousands of onlookers strolling on the Croisette, the unbridled parties on the beaches… There, at best, we will meet 23 other people, the games being limited to 24 players.

Climbing the stairs in immersion

The immersion is nevertheless interesting and we have hardly taken the time to stroll around the Palace and to smell the sea air, on the beach – “a hell of a challenge to reproduce, especially in terms of this damn sand”, Robin Aleman whispers to us – that night is already falling on the city and we are told that we are about to climb the steps. We therefore approach the red carpet to see spotlights pointed in the sky and the spotlights illuminate these famous steps on which we can come and strike a pose.

“As soon as the project was green lighted, Epic was offered to integrate aspects that are not usually possible in the Creative mode, such as video sequences or pre-recorded sounds, continues the Brut manager. It allowed us to accentuate the immersive and realistic side of this image of Épinal represented by the climb of the steps by using real sounds recorded in previous years. Or to create false video reports broadcast on the billboards scattered on the Croisette”.

The intention is laudable but obviously not yet operational at the time of our test. Instead of photographers shouting at the stars to catch their eye, shouts from the public or the crackling of flashes, only the sound of waves and seagulls is heard. Inevitably, immersion takes a hit, but we are assured that the bug will be resolved by the official launch.

Notions of climate and inclusion in the program

Afterwards we can always have fun with mini-games included in the experience. Like an obstacle course on umbrellas along the beach or a frenzied game of paintball through the city, either by facing the other participants, or by simply deciding to go and paint part of the decor.

But Brut has also taken up the festival’s notions of commitment, particularly with regard to the climate emergency and the notions of inclusion and diversity in society. Since last year, the event has indeed implemented a series of measures to reduce its carbon footprint and since 2010, a Queer Palm, rewarding a film for its treatment of LGBTQ+ themes, is awarded each year.

“These are subjects that are really at the heart of our concerns, at Brut, confirms Adrien Torres. We wanted to find them in our gaming experience but not in a basic way, like with dedicated quests. We have instead opted to treat them implicitly through our different scenarios, in a more subtle way”.

Do we continue the immersion in Venice or New York?

Before the opening to the public, the experience seems in any case to have already aroused a certain interest among professionals since Adrien Torres assures us that he has received the proposal of other cinematographic events to transpose the principle to their environment. We actually imagine that for the Tribeca film festival in New York, or that of Venice, the experience could be particularly interesting. And why not, even, an Oscar ceremony to follow in total immersion?

In the meantime, Brut is already looking towards the next edition. “We only had 3 months to put this card together, underlines Adrien Torres. This is little. We see it as a test phase, executed with all possible requirements but which should be much more complete next year, if the idea pleases”.

He thus evokes the possibility of finding this time the real architecture of the different buildings on the map.

“You also have to understand that the Fortnite Creative product is evolving rapidly, adds Robin Aleman, with the appearance of new features every 3 months, some of which are often completely game-changing. For example, we have recently seen the arrival of dynamic elements in the game, allowing users, for example, to control an elevator, or the possibility of making a car move, whereas before everything was frozen. Next year’s features will therefore allow us to potentially have a significantly different experience from this year’s.

The Cannes Film Festival teleports into the Fortnite universe