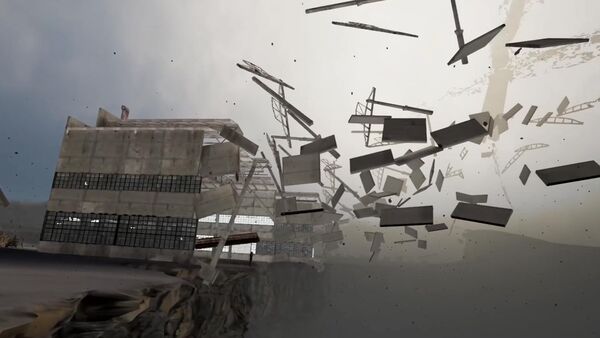 Into the Radius is a hardcore single-player survival shooter developed by CM Games studio. You’ve probably heard of it since its release on PC VR headsets via Steam. Recently it launched on Meta Quest 2 headsets. Check out our first impressions of the game.

After spending a few years exclusively on PC VR devicesInto the Radius today brings its post-apocalyptic jaunt to Meta Quest 2. Combining exploration, survival mechanics, and gunplay in one robust and enjoyable package, it has a lot to offer players looking for a deep experience. The game pays homage to the Soviet book Roadside Picnic (1972) and later the film adaptation Stalker (1979).

In Into The Radius, you embark on a surreal journey through an area teeming with extraordinary phenomena, bathed in a brooding atmosphere and filled with dangerous entities. It’s part tense atmospheric horror, part first-person shooter, and part methodical survival simulator. Read on for our full review and verdict on what we think of this STALKER-inspired VR adventure.

In post-apocalyptic worlds, there is always something fascinating to explore. In fact, they often offer tense and immersive experiences. And that’s exactly the case with Into The Radius.

Indeed, the game takes you to the area of ​​Pechorsk, dotted with surreal landscapes. Set in the post-apocalyptic future, humanity is pretty much wiped out except for a few groups. You gather supplies for survival. Throughout the mission, you will have to face very dangerous enemies. What is certain is that it is a hell of a setting.

Pretty much everything in the game feels natural in VR. You use handles to grip objects well and manipulate them. Opening doors, picking up guns, climbing ladders… The list goes on. That’s what a VR game should strive to be. But into the Radius takes this immersion a little further than usual. For example, you have to manually place each bullet in a magazine, which we really appreciated.

The game really pushes players to invest in the experience

Once you start a mission and venture into the exclusion zone, the real fun begins. You will look for loot in buildings while enjoying a very atmospheric environment. Naturally, there are many enemies to fight. Most of them are almost wrongly basic, with a very simplistic AI who won’t do much to challenge you. But that doesn’t mean it’s all bad.

The fight itself is perfectly fine. You grab the gun, point and shoot. If you have ever played a VR shooter like pavlov Where Forward, you pretty much know what to expect. Reloading is done entirely manually and each weapon type has a unique feel. However, if not maintained, you could end up with a non-functioning weapon.

In your backpack, each item will take up physical space. It forces you to properly manage your inventory and plan the layout of things. Between two explorations, you will be at home to prepare your next expedition. It’s a neat little place where you can take on new missions, sell and buy equipment, and even play the guitar. Stocking up on food and cleaning your weapons so they are less likely to malfunction are also key to surviving in the Exclusion Zone.

The game expects a real commitment from the player to invest themselves in the experience and to be part of the world. And this makes the survival aspects all the more rewarding. If you’ve never been a big fan of the survival genre, there will be something in Intro the Radius’ rough requirements that will have you fully invested from the start.

Lots to see and do

As you progress, you will earn much more equipment, ranging from pistols to assault rifles, shotguns and a range of gadgets to help you survive. These are delivered to you drip at a steady rate and add a new layer each time.

It’s not just a map either, but rather a series of interconnected areas that make an otherwise massive world feel a bit more digestible. Each area also has a different look and feel to the previous one, preventing the game from quickly becoming boring. There are plenty of things to see and do that will keep you busy for a while.

Getting into Into the Radius requires great concentration

With so much stuff lying around, you may forget that there are real missions to follow. Whatever you do, you must keep in mind that you must collect ammo and guns. You should also think about your repair habits. This intentionally slows down game speed, forcing you to concentrate more intensely on what you need than on what you kill.

Most often, your mission objective is based on an object that needs to be retrieved. However, if you spend too much time wandering around the Radius, you will encounter a phenomenon called “The Tides” which resets enemies, items, and throws you to a random location on the map. Better not to hang around and have everything ready at the base before venturing out.

The emphasis on item preparation and maintenance most definitely affects the pacing of the game. You will need to think long and hard whether to take out a villain, or just hide and run to avoid wasting supplies.

Plenty of comfort options in Into the Radius

Into the Radius features all the major VR comfort options. So most people should live a comfortable experience. The level design is such that users will need to do a lot of walking and run. Plus, you control how and when you move around the world at all times.

One of the things we liked about the game is that it can be unsettling. Into the Radius doesn’t actually look like a horror game. But some views through the environment are so weird that it’s hard not to feel uncomfortable (in the best way possible).

At the same time, it’s not quite the best of games, with Quest 2 limitations. Some locations just look a bit dull and lacking in detailwith lots of dull textures on display and barren lands to explore that don’t offer much to look at.

However, make no mistake. There are times when the game can be really great, thanks to the world design creativity more than anything else. But for the most part, the presentation is just quite unsightly. But looks aren’t everything, right?

The game isn’t always the best at showing players what to do. The menus are not clear enough, especially in the opening hours of the game where you won’t know exactly what to do. Want advice?

Check out some tutorials first on line. You won’t regret it and it will help you get the most out of the game. Be aware that some of the enemies you will encounter can be really scary. The aftermath of the disaster that struck Pechrosk left horrible creatures that will hunt you downwith an array of humanoid entities ready to slaughter you at any moment.

They present themselves in different shapes and sizes and have a variety of strengths and weaknesses. So you need to be prepared for a given situation when you face it. Most of the time, it will just take a few bullets to push them back. But there are also times when you have to be a little smarter in your approach.

Visually, Into the Radius is well varied. Each sector brings its own creepy vibe and its environmental anomalies that differentiate it from others. But some areas are geometrically blocked to be sometimes immersive.

Inconsistent lighting also makes it feel more cartoonish than it should be at times, though it’s clear the devs are clashing to the limits of Quest 2’s mobile processor. The interaction with objects is unfortunately not a strong point either. Also, searching for items in the backpack can sometimes become an unpleasant experience.

The sound effects, music and ambience are great, but Into the Radius makes the same mistake RedMatter 2…Russian framework, mediocre american dub. The actors don’t look like they’re reading for a grim survival experience.

Overall, Into The Radius is one of these games that show what VR is capable of. It’s a entertaining survival experience which brings with it a harrowing and deadly world to put players’ skills to the test. There’s nothing more rewarding in the game than surviving a vicious trek through what’s left of the earth.

There’s a lot to enjoy about Into the Radius. And of course it might not be the prettiest game in Quest 2 and there are some bugs that need to be fixed. For example, we found ourselves stuck in an environment in one case. Another time the game didn’t let us interact with objects. On another occasion, we were unable to fire our gun.

But it is certainly one of the most rewarding survival experiences on the platform. We recommend it to VR veterans, as well as newcomers.

Comfort : Many options to provide a comfortable experience.

Gameplay : The basic mechanics are worthy of a VR shooter and survival game.

fun factor : The hardware it is on does not allow it to reach its full potential.

Graphics : The material does not allow good visuals.

Be the first one!

[TEST] Into the radius: What is this survival shooter type game worth?