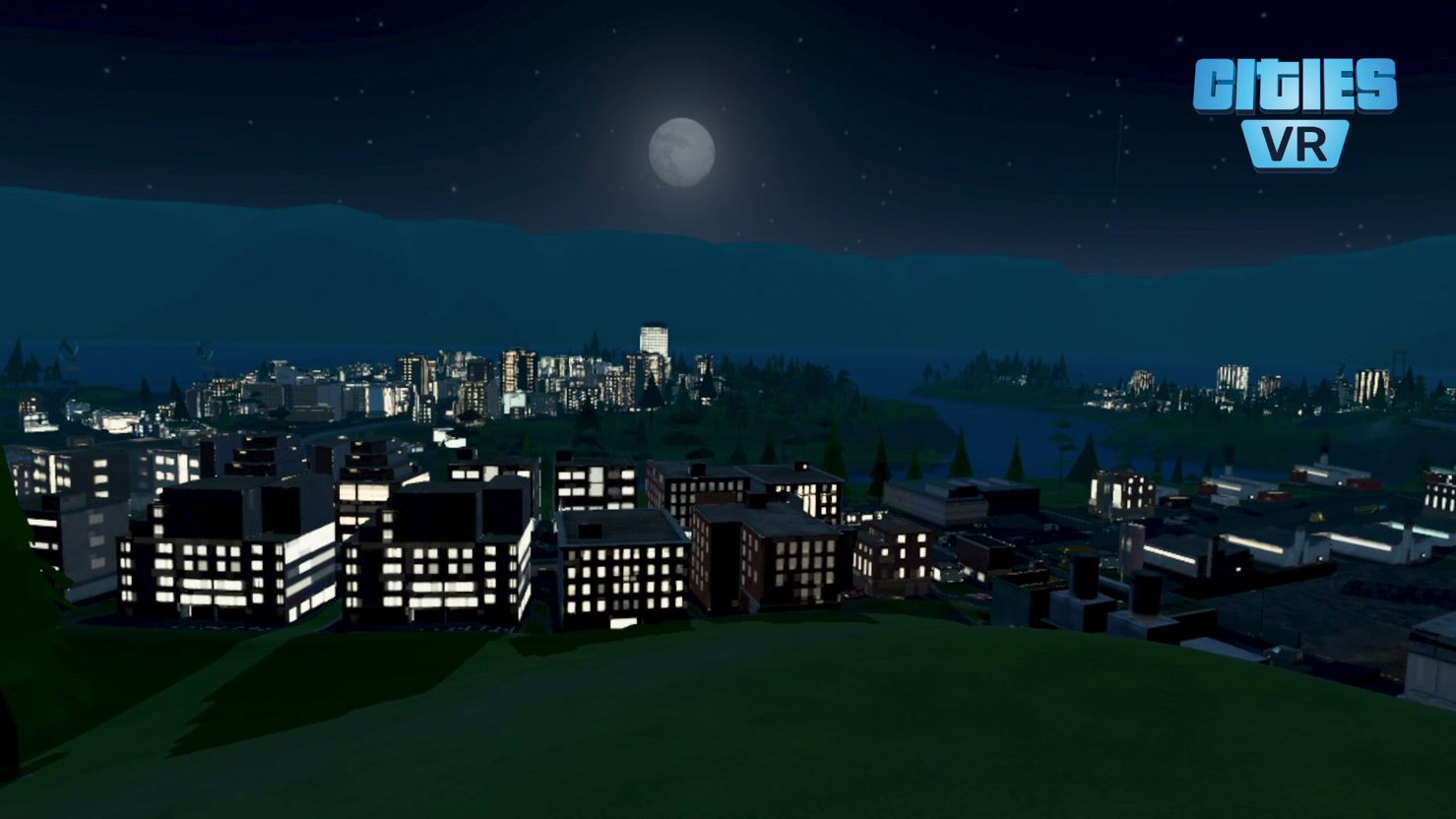 Today we focus on the game Cities: VR which has just been released exclusively on Meta Quest 2 at the price of 29.99€. This is a virtual reality city building and management game based on the famous PC game Cities: Skyline released in 2015. A new genre for virtual reality and for which we will see if VR is suitable and if this game honors the license which is a reference on PC.

If Cities: VR is managed by the same publisher as Cities: Skyline, the development has been entrusted to an experienced VR studio, Fast Travel Games, which already has games like Apex Construct or Wraith The Oblivion: Afterlife to its credit. First great news, the game is fully translated into French and in a very successful way, which is not always the case for a VR game.

When creating your first city, the game will offer to accompany you with a rather successful tutorial that will show you the different commands to move around, change views, access the different menus and above all build your first buildings.

For those who do not know this kind of game, it is not enough for you to build at all costs since many parameters are constantly to be taken into account. The basis is to connect all your buildings to an electrical network powered by wind turbines or power stations. This is also the case for the water and sanitation network which must be connected to a pumping station and to the sea. the development of your residential neighborhoods. You will gradually learn that you have to think of a lot of things from your first swings or else you will have to destroy and rebuild. We also think of the road network which can be very quickly congested if you only build a simple two-way road to enter and leave your city or access an industrial area. To further develop your city, you will then have to think about garbage, healthcare, education, security. But as the saying goes, Rome wasn’t built in a day!

9 different maps of 2 km² against 17km² on Skylines are currently available in this Cities: VR. A size difference which is certainly due to the limited power of the Quest 2 compared to a PC. The game gives you the choice to start with a progressive unlocking of constructions or access to all of them from the start of your game. If you are a beginner, we recommend the first option since it will allow you not to burn too much by constructing buildings and infrastructures beyond your means. It is also possible to play with unlimited funds.

Because yes, there is obviously a very important economic dimension in the game. As mayor, you have an initial budget to build your city but you will then have to manage so that the taxes, and therefore the number of your inhabitants , finances your expenses such as constructions, the operating costs of your power plants, schools, hospitals, etc. You will be able to view your profits or losses permanently and in real time by slightly turning your left joystick outwards. If the number is positive, your city is earning money. If it is negative, it means that you are widening your deficit at the risk of not being able to build anything if it lasts too long. At any time, you can pause the time cycle to avoid continuing to lose money while making adjustments. On the contrary, you can also speed up the time to increase your cash flow if you have a positive balance sheet. Speeding up time is done by keeping the left stick pressed but unlike PC gaming, you can’t force this for a long time. If you have almost no more money available but your balance sheet is positive, you will have to keep pressing the stick for very long minutes to see your coffers replenish.

On the quick visualization part, you will also see at a glance your number of inhabitants and its upward or downward trend as well as the needs of your city in residential, commercial or industrial areas.

Regulars of management games know that the most important thing is to be able to access many indicators and parameters easily, even more so when it comes to a city. While it’s easy enough to overwhelm the view of a PC game with settings and menus all over the place, we were eager to see if the developers had managed to craft a system that’s practical to use in VR. It was certainly their biggest challenge. So they started with a different use of each of the Quest 2 controllers. While the right controller is used to move around the map, change views, select buildings and build, the left one is in a way the palette of painter with all your tools. You even have 3 different palettes in your left hand, one for construction, another for managing your budget and a third to view the indicators of all the parameters (production and consumption of electricity, access to healthcare, etc.) this is accessible via menus and submenus that can be selected simply with your left stick. It takes a bit of learning to excel at navigation but the design is quite logical and clear. However, you will not escape selection errors by wanting to go a little too fast and as you unlock all the menus. We would still have liked to be able to constantly see important indicators such as the production/consumption ratios of water and electricity without having to change palettes and menus in the middle of the creation of a new district.

After several hours, we felt the game was less punishing than Cities: Skyline, which I played a few years ago and ran out of money very quickly. The balancing of Cities: VR leaves I think a little more freedom to the player than his elder. Regulars of the genre could therefore find themselves a little frustrated by a lack of challenge, especially since the game does not offer different levels of difficulty with more or less budget to start, for example.

In conclusion, we can say that even if Cities: VR is a great achievement, the interest of playing such a game in virtual reality is, in our opinion, quite limited. It is necessarily less practical to play, less complete, less beautiful and with smaller maps than Cities Skylines while being sold at the same price. Only lovers of management games who do not have a PC will therefore be able to find their way around while the others will certainly be frustrated. The developers have still done a great job and players will certainly find their account with several hours of play ahead of them and free improvements already planned for the future.