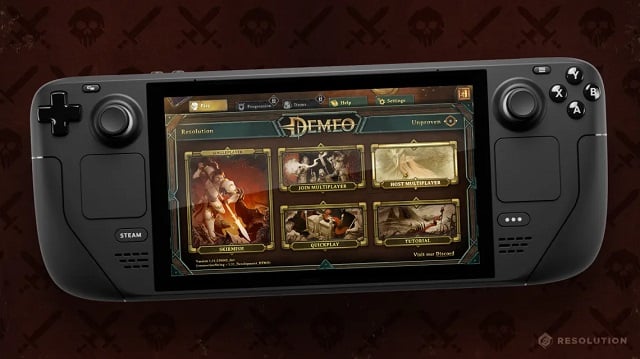 At its first-ever VR games showcase, which took place yesterday, Resolution Games revealed loads of new VR games and updates. The year 2023 promises to be interesting for the Swedish studio behind VR titles, like Demeo, Ultimechs and Angry Birds VR.

Resolution Games’ very first VR games showcase went off successfully, to say the least. The studio based in Stockholm, Sweden, took the opportunity to unveil several new virtual reality games. He also announced some updates for popular titles, such as Demeo, Ultimechs and Bait!

He also presented his latest developments in mixed reality and augmented reality spaces. This includes his work on his version of the metaverse, dubbed Tinyverse. Here’s a recap of everything Resolution Games revealed during its VR games showcase.

Among the novelties announced during the VR games showcase of Resolution Games, there is first of all the launch of the open beta of Spatial Ops. This is the very first Competitive FPS in mixed reality. It’s available for free on SideQuest right now.

The new VR title supports between 1 and 8 players. Its particularity is that it uses technology pass-through. With this feature, it gives players the ability to turn any real-world environment into a real battlefield.

Racket Club is a new multiplayer VR game aimed especially at fans of racket sports. It will give gamers around the world the opportunity to compete in an all-new virtual sport exclusively designed for VR headsets.

For the moment, we do not yet know much about the famous title. Nevertheless, we know that it promises gameplay quite similar to that of other multiplayer games from the Swedish studio.

Since its release, Demeo has been considered one of the best role-playing games available in virtual reality. Much to the delight of fans, Resolution Games has also given more details about its pvp modebaptized Demeo Battles, during its VR games showcase.

Announced about a year ago, so it will eventually come out next year. In the meantime, the studio has released some images of the mode, and promises to reveal more information about it later.

Reign of Madness is the fifth and final adventure of the VR role-playing game Demeo. Free, the new update is available on PC and various compatible VR headsets now. It will also land on Pico 4 a little later.

Reign of Madness features new levels, maps, and enemies. Note that with this new content, the price of Demeo will increase to $39.99 across all platforms in January.

Available now on the Epic Games Store and Steam Deck

During its VR games showcase, Resolution Games also honored Demeo fans on pc. The studio then announced that the PC edition of the game left early access. From now on, the title is therefore available on the Epic Games Store and Steam Deck.

For Valve’s portable game console in particular, Demeo now supports controllers, and is optimized for the device.

The Bait Fishing Game! did not receive any major updates since 2016. Fortunately for fans of the VR title, Resolution Games hasn’t forgotten them either, and has launched the “Fishin’ Buddies” update.

Available on the Quest Store now, the latter brings a multiplayer mode in the game. For the first time, players can therefore experience Meta Quest 2 together and in real time.

Available now on Meta Quest, SteamVR, and soon on Pico

To the delight of fans, the PvP shooter Blaston is now downloadable free on SteamVR and the Quest Store through the “Free-to-Play” update. The hit VR title will also land on Pico Neo3 Link and Pico 4 next year.

In addition to making the game free, the new update also brings a few upgrades and additions. This includes new weapon attachments.

In particular, it offers a new Arcade mode in which cooldowns are shorter and supercharges more abundant. It’s available on the Quest Store, Pico, and SteamVR right now.