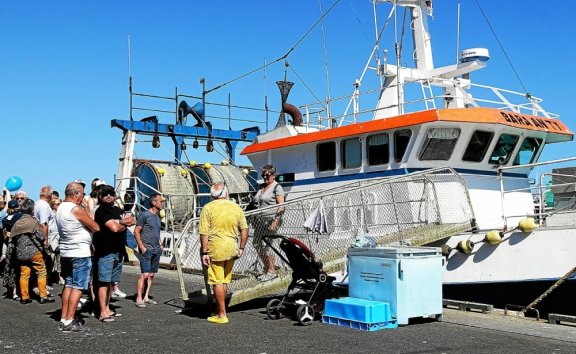 
Two years that we wriggled with impatience at the idea of ​​​​finding the Fête du Pesked (“fish” in Breton), which took place on Saturday at Guilvinec. Tastings, virtual reality and inflatable structures enlivened the town under a radiant sun, as did boat tours in the port. Patricia, who came from Dordogne (24) for the weekend, was one of the 1,000 visitors who came to admire the Bara An Ty (from Armament bigouden). “We are more aware of the working and living conditions of sailors,” she underlines.

The Haliotika Fishing City, event coordinator, hasn’t been empty all day. “Nearly 2,500 people came to visit our premises, compared to 1,750 in 2019. We had everything, regulars, curious people, tourists… It’s a bit like the Eiffel Tower effect, but for the Bigoudens”, rejoices the director, Anna Latimer.

The 5th edition of the Pesked Festival is associated, for the first time, with the Week of fishing and aquaculture in Cornwall. “It was a coherent choice to unite, it strengthened the ties, continues Anna Latimer. We are thinking of forming a steering committee to include our partners in the organization of Pesked 2023”.

From 6:30 p.m., the “tuna” went up a notch on the Place de la Petite Sole. The former director of the Guilvinec auction, Christian Berrou, put on his overalls to animate a live auction, practiced from 1959 to 1995 when the auctions for fish and shellfish were announced orally (hence the name “criée “). Mussels, oysters, turbot or garnished baskets, the public fiercely competed for around twenty prizes. Not to mention a little joker dressed as a hake, who offered himself for sale… “Making this animation had been on my mind for a while. It’s a real job that was learned on the job”, testifies Christian Berrou, strong of thirty-nine years spent in the auctions.

Elected in the langoustine competition

At 7:15 p.m., the atmosphere became electric. We are not talking about eel but about the langoustine shelling competition, in which elected officials from the Pays Bigouden and the Department took part this year. The mayor of Guilvinec Jean-Luc Tanneau and his first deputy Daniel Le Balch played in the final with six other candidates, to the applause of the crowd. Fanny Trividic was proclaimed champion for the second consecutive year. She shelled 100 langoustines in 3’49, seventeen seconds faster than his record set in 2019.