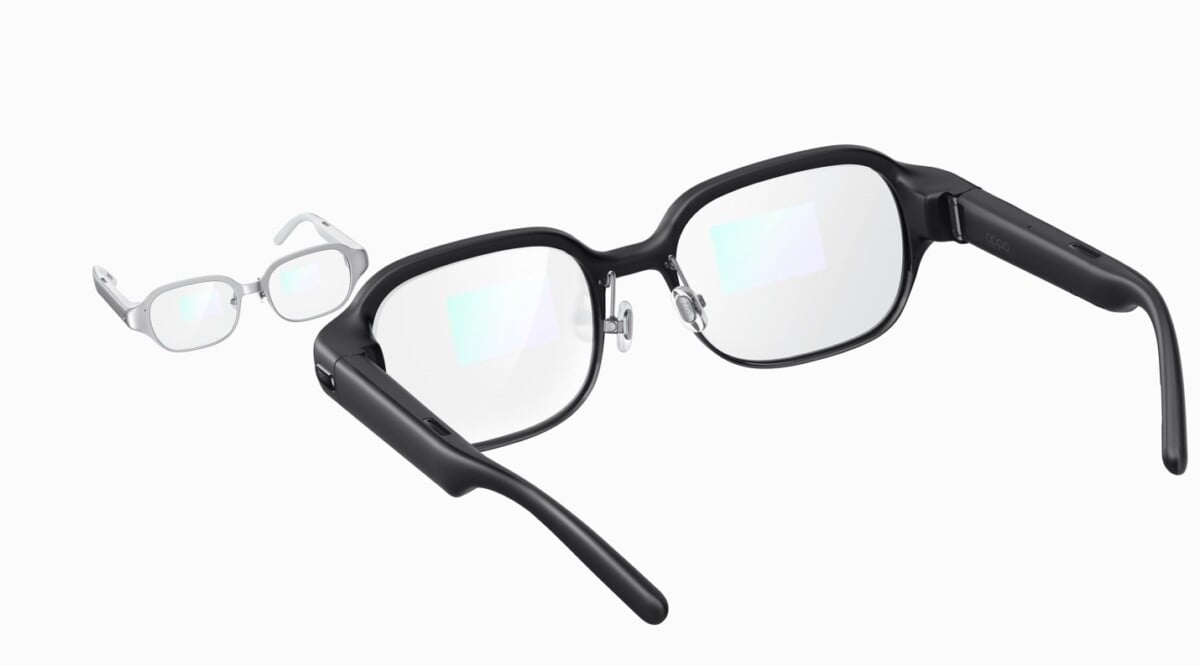 On the occasion of its annual conference, Oppo presented several new features, including the Air Glass 2. This is the second version of its connected glasses, with a notable improvement: the design. Glasses that finally look like a real pair that we wear every day.

Oppo today held its annual conference dedicated to its technological innovations, notably presenting a connected health monitor and its MariSilicon Y smartphone chip. In addition to this, the brand announced the Oppo Air Glass 2, the direct sequel to the Oppo Air Glass which we were able to take in hand in April 2022. The most notable change is obviously the design: it is no longer an added monocle, but real connected glasses.

A design revisited in depth: no more horrible monocle

What impresses from the outset is the weight of this accessory: only 38 grams. Compared to the 30 grams of the previous model (without the glasses part), it’s a nice improvement, although it’s still heavier than classic glasses.

Oppo also indicates that vision correction will be available, which is a good move, so that buyers really use them even if they have vision problems. The brand specifies that the Air Glass 2 have “further customization“, without knowing what it is. But the will of the manufacturer is there: to make them “almost indistinguishable from ordinary glasses“. Apart from the branches that betray the electronics it contains, this pair can go unnoticed.

Everything suggests that Oppo is based on the platform Snapdragon AR2 Gen 1 presented last month by Qualcomm. This is a base that manufacturers can use to create their own pairs. However, the brand has not yet explicitly confirmed this.

The uses of the Oppo Air Glass 2 presented

With this innovation come uses imagined by Oppo for its product. The brand indicates that these connected glasses will be able to “make phone calls, perform real-time translations, provide location-based navigation, convert voice to text for people with hearing loss, and many other smart experiences“.

Uses made possible thanks to two screens (one per glass), if we are to believe the design revealed during the conference. Moreover, the lens developed by the manufacturer was designed to control the diffraction of light in order to ensure that the glasses display content “Above” the real world. We can assume that the controls will be the same as on the previous model, namely voice control and gestures. Voice control possible thanks to Breeno, the voice assistant from Oppo, who is not very comfortable with English at the moment.

One of the major challenges for Oppo will be precisely to multiply the uses of its glasses to make them… really useful. Oppo Vice President and Product Manager Pete Lau is aware of this and says he wants to workwith more partners to empower a better future through virtuous innovation, creating more possibilities in smart connected experiences“. During its conference, the brand stressed the importance of its partners, developers, creators who “distributed their products and services through Oppo’s open platforms“.

However, we do not yet know any technical elements about these glasses (autonomy, screen, performance, etc.). Oppo has also not indicated a price, a release date, or even the markets in which the Air Glass 2 will be sold.

Oppo will have to face the competition

Oppo is not alone in this growing market, however. Few days ago, Huawei launched its Vision Glass. The promise is a little different, since it’s not completely about smart glasses, but mainly a video output device that you plug into your smart phone or his computer. TCL has the NXTWear S on its sidethe concept of which is the same.

It is also difficult not to mention the giants of new technologies. If a priori Meta would have abandoned its augmented reality glasses project, the others do not. We know that Google is working on a new version of Google Glassafter the bitter failure of the first version. The other model that is long overdue is obviously the Apple Glasswhose rumors have been multiplying for several years and which could strongly participate in the popularization of connected glasses.

Going back to the Snapdragon AR2 Gen 1 platform, we already know some brands that have signed up with Qualcomm to develop their own models: Lenovo, LGNreal, Pico, Tencent, TCL and Xiaomi. We can therefore expect to see other pairs appear on the market in the coming months.

Oppo: you’re not dreaming, these connected glasses are not horrible