Meta has a few end-of-year announcements, starting with a Shared Spatial Anchors feature that allows multiple virtual reality headsets located in a common space to see the same virtual objects in sync. .

Unveiled late last week, this capability is integrated into Meta’s Presence Platform. It had been glimpsed during the Connect conference in the form of “Magic Room”, a mixed reality experience featuring a work group in a hybrid situation: some being remote and others gathered in the same room. In addition to possible “design thinking” sessions, this feature will allow you to indulge in local multiplayer experiences.

These anchors are already available for the Quest Pro, and will be compatible with Quest 2 headsets in the first quarter of 2023. The API is available for OpenXR, Unity and Unreal Engine.

On December 19, two new names were announced. The first is “Meta Reality” and refers to all the technologies used by the Quest Pro to do mixed reality. Mixed Reality, MR, Meta Reality… We understand the logic. As for the interest, it is a question of distinguishing the specific technological platform of Meta from the competition, more and more manufacturers of VR helmets boasting of doing mixed reality.

Mixed reality without depth sensor thanks to machine learning

The company stresses in a blog post that it is not enough to offer color video passthrough, but that it is necessary to map the user’s environment, to understand it in order to determine in particular where the furniture and other items are located. obstacles (a process called “scene understanding”), and finally to be able to place the famous spatial anchors there, precisely, to “anchor” virtual elements there permanently.

Meta is not the first to offer these features, but the company currently relies on a rather particular system, consisting of two black and white cameras that map the room in tandem to estimate its depth and a camera RGB which colors the image afterwards. One of its specificities is that it does not use a depth sensor, relying instead on a reconstruction by machine learning.

This generates up to 10,000 landmarks per image and up to five meters away with the Quest Pro. In comparison, the Oculus Insight system presented in 2019 and which allowed the Quest 1 to be located in a room only used a hundred of them.

The Infinite Display, fruit of 6 years of work

The second new term refers to the Quest Pro’s display system, which Meta has decided to call “Infinite Display”. The goal is again to differentiate themselves from the competition, a proven strategy that other manufacturers like Apple use at leisure. But Meta seems especially keen to clarify that the components it uses are not simply bought off the shelf but are the result of several years of research. 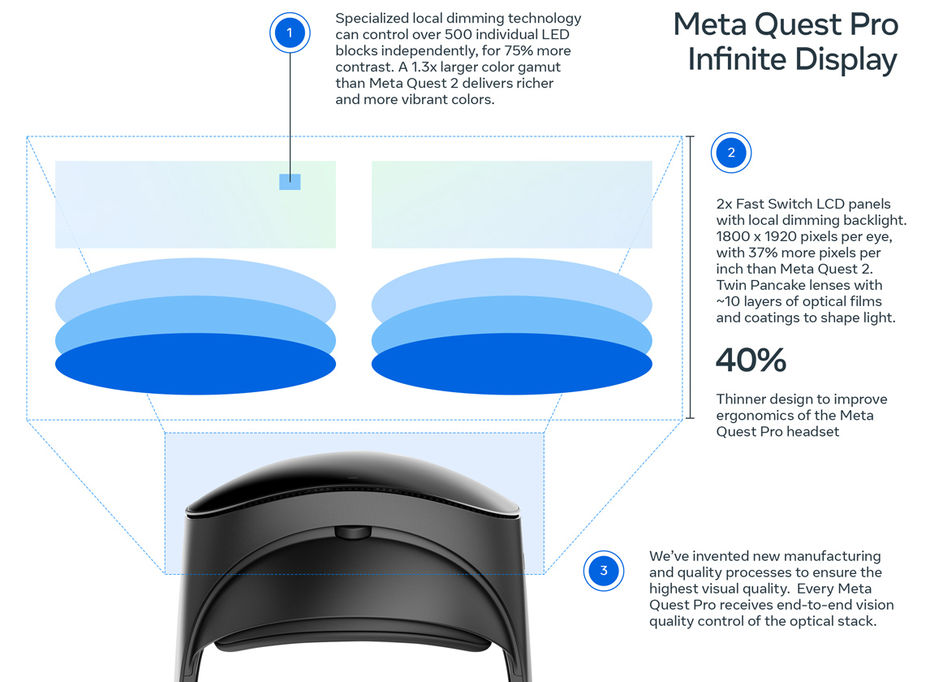 The company points out that it holds more than 350 patents on optical technologies, that the Quest Pro lenses are made up of more than 10 layers of optical films, and that it took two years to develop the original concept in within Reality Labs Research, then another four years to turn this research into a component capable of being manufactured on a large scale for commercialization. She even states that she had to help the supply chain to develop these production capacities, because they did not exist before.

The right way to measure

Another point on which Meta insists: the right way to measure the visual fidelity of a virtual reality headset. As we know, talking about pixels per inch (or pixels per inch in plain English) of a panel is misleading because the entire screen is never visible and the lenses have a very significant impact on the perceived quality.

However, everyone does it anyway because it’s quicker and easier to understand than pixels per degree (the number of pixels contained in 1° of the field of vision), not to mention that the visual clarity of the lenses is even more difficult to be measured with precision (we speak of modulation transfer function or MTF).

Yet this is what Meta pleads for, a bit likeIntel for the finesse of the engraving of the processors. We wish him a lot of courage to impose it as a standard of measurement among his competitors.

Meta Reality, Infinite Display: Meta wants to differentiate its technologies from those of the competition