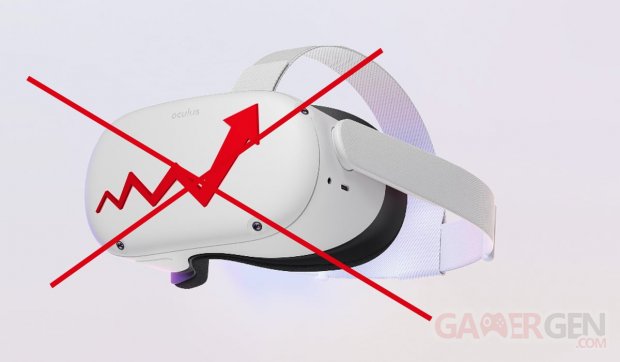 For a few days already, we have seen flourishing on news sites and channels Youtube the following announcement: Meta would have increased the performance of the Meta Quest 2 and boosted the GPUs from 490 MHz to 525 MHz. In reality, this is not the case and we will explain to you why.

Today we’re excited to announce that you have more GPU compute power to work with on Meta Quest 2 devices—7% to be exact. All developers can start taking advantage of the new 525 MHz GPU frequency (up from 490 MHz) for better app performance. Learn more ➡️ pic.twitter.com/TeeXMw8Leu

It did not take much more to panic the crowds and that the misunderstanding of some makes the truth of others. We can thus read almost everywhere on forums, news sites or channels Youtube that the Meta Quest 2 will become even more powerful in the next update V49. Unfortunately, the damage is done and many users expect to be amazed by the new graphics offered by their virtual reality device.

However, it is absolutely nothing. Meta never announced having improved the power of his Meta Quest 2but only the fact that the developers now have more room to develop their games/software by using a slightly higher frequency than before.

Time for a bit of theory. It is possible to change the performance of Meta Quest, Oculus Go or helmets PICO Neo 3 Link and PICO 4 playing on the performance level of the GPUs (Graphic Processor Unit = graphics card). the GPUs deals largely with calculating graphic effects, textures, etc. in video games.

There are 6 performance levels, corresponding to more or less high operating frequencies. The higher the frequency, the greater the GPUs can process information and therefore more images or visual effects, provide better resolution of textures, etc. Here are the levels in question for the chip Snapdragon XR2 equipping the Meta Quest 2 and PICO 4 :

Until now, developers were restricted in their developments to level 3, that is to say at a frequency of 490 MHz. Thereby, Meta was assured that games and applications did not have an excessive impact on battery consumption or the heating of the headset. Today, with direct competition from PICO 4 and the rise of batteries to last longer our gaming sessions, Meta finally woke up and announced to let go of the ballast so that the developers offer games a little more accomplished visually or simply more stable. It was about time, because we regret the poor fluidity of many games released recently like Moss: Book I, BONELAB, nock, Ultimech, Medal of Honor: Above and Beyond or the most recent Marvel’s Iron Man VR. These games struggle to maintain a consistent frame rate, which results in lots of frame drops and a less than perfectly smooth experience.

This little boost is therefore welcome for us players, on the only condition that the developers update their games. to take advantage of this meager performance gain. We are talking about 7% here, which ultimately does not represent much. Don’t expect much changeand again, all the developers have to play the game.

These performance levels, you can activate them for example via the app Side Quest on your computer:

Or using the Quest Games Optimizer directly from your headset, without a computer, the latter offering more fine tuning and performance levels than Side Quest : 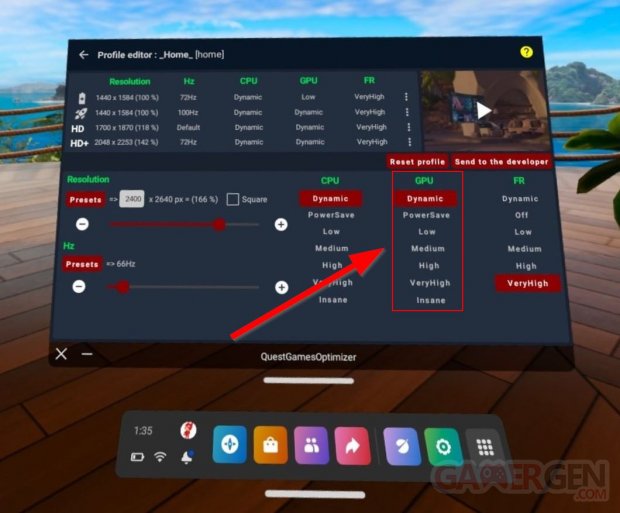 So it’s anything but an improvement of Meta Quest 2, but a little more leeway for developers, and the nuance is there. Level 4 (525 MHz) is regularly activated by the headset itself in certain use cases if the demand for performance is felt. The performance levels quoted have always existed and you can use them by going through the command adb following: “adb shell setprop debug.oculus.gpuLevel THE-LEVEL-OF-YOUR-CHOOSE”. Side Quest and the Quest Games Optimizer use this command to change the capabilities of the GPUs.

By increasing the capabilities of GPUsyour headphones will consume a little more battery and heat up a little more. However, do not worry, if you have a battery, the problem no longer arises and the heating remains moderate in all cases. The helmet can cross 50°C without flinching, just like a smartphone. On average, during in-game use, the temperature of a Quest is between 40 and 45°C.

This last question remains. Why Meta announce this only now? We could have had more worked experiences from the beginning… And it is for this reason that the Quest Games Optimizer was born, to overcome this lack and optimize the visuals and performance of games and applications while playing on many more parameters than the simple GPUs. To those who wonder if HQ is dead, the answer is no: HQ goes well beyond the 7% additional performance and in many cases exceeds 50% and has been using 525 MHz and 587 MHz for a long time.

Meta Quest: no, Meta did not increase the performance of the Quest