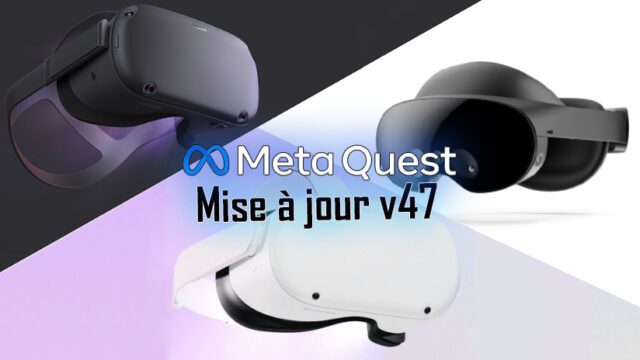 Almost two months have already passed since the deployment of the v46 system update of our Meta Quests. Since that date, the Quest Pro has arrived on the market and this new update therefore now concerns 3 generations, the first Quest, the Quest 2 and this new Quest Pro.

This v47 version is already in the process of being deployed, but the features can arrive piecemeal, sometimes several weeks later. Here is the list of these novelties:

This first new feature is intended for owners of a Quest Pro. Users now have the ability to capture and share exactly what they see in the headset when using mixed reality apps. The deployment will be gradual.

Another function for the Quest Pro. It allows you to play a background sound when you are in an immersive application. So you can work to music or unwind by listening to a podcast while playing a round of virtual mini-golf solo on the Quest Pro. The deployment will be gradual.

Simplify viewing, editing and sharing your photos and videos that you capture in VR. Media will now automatically sync to the Meta Quest mobile app from your headset.

Mobile app update with new features. You can start, search and join a multiplayer session with your friends directly from the home screen. Reorganized the device management screen to make it easier to know when your headset needs charging.

You can also purchase Meta Quest digital gift cards which are redeemable for any app or game in the Meta Quest store.

It is finally possible to modify your avatar directly from your Home. You will now see your avatar’s arms and hands in your “home”, and if you haven’t created your avatar yet, you will see a default avatar. You can also view and edit your avatar by interacting with the new mirror we’ve added to the homepage. This will be rolled out gradually and will initially be available in 4 environments (Desert Terrace, Space Station, Winter Lodge, Cascadia).

The avatar editor will also be updated gradually

v47 unlocks the compatibility of Meta Quest Pro Touch controllers with the Quest 2. As a reminder, these controllers have more advanced haptics and fine motor controls such as precision pinch movement, joystick and pen tip, for even more intuitive virtual reality experiences.