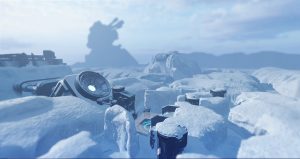 Playing video games by physically moving yourself in a 500 m² arena. EVA (Esports virtual arenas), a company considered the world leader in
e-sport in virtual reality, opened a new room on December 5 in Maurepas, in the Pariwest area. The 16th in France, and the 2nd in Île-de-France after Beauchamp (Val-d’Oise), for this company created in 2015 (2018 under its current name). The Maurepasian room, of around 2,000 m², is therefore added to the list of those already opened by EVA, offering a “quite unique” concept, says Éric Gerbault, manager of this room.

“The principle is to offer virtual reality in free space. […] Players are free to move around in the game physically, unlike what can be found in classic video games, he explains. There, you have a real correspondence between your physical movement and the movement that you see in the game. You see your own character, yourself, which moves. It has a certain sporting side, because you have a physical activity, and the games offered are games with a competitive spirit. »

“What is attractive in this project, in addition to the sport aspect, is that we have this double social, physical aspect, which changes the image we have of the gamer in front of his screen eating his chips or his wedges of pizza, continues Éric Gerbault. And then, it’s also an affordable hobby for everyone, you don’t have to be a gamer to have fun. On the other hand, if afterwards you want to be able to evolve in the games and go up in level, it becomes much more sporty and competitive. » EVA is developing the competitive aspect through tournaments, in particular the 1st EVA French Cup, which was held this year.

This concept proposed by EVA in its structures is unique in terms of e-sport activity of shooting games, assures Éric Gerbault. In the Maurepasian room, the same principle of play is adopted as in all the other rooms of the group. Equipped with a backpack, a kind of computer in the back, to which a weapon is connected (dummy of course), and a virtual reality helmet, the players find themselves immersed in a virtual world, and compete or collaborate – depending on the chosen mode – in three different types of games.

“The most important game, on which the brand has developed its notoriety, is After-H, which itself operates in three modes: domination (as a team, you have to take an area, editor’s note), each for himself, and the kill mode, where the goal is to kill all the members of the opposing team as quickly as possible, lists Éric Gerbault. Then you have the Zombies game: you’re all together, and you’re being attacked by zombies. The 3rd game is Legend of Mars […] : you are a team that must defend an attacked point. »

La Gazette was able to test a few modes, not without a certain wonder, particularly regarding the graphic quality of the game maps. The participants met, too, seemed delighted. “It’s excellent, it’s ultra-immersive, it’s super easy to get started with, we’re having a blast,” exclaimed among a group of colleagues, notably marked by “realism” and the fact that it’s “really us who move, it’s not just a keyboard and a mouse”. The test week, organized just before the opening, also proved conclusive, according to Éric Gerbault: “We had a lot of people. […] We saw all the profiles: families, players of all ages, and all the feedback was positive about the game.

The price for a game is 19 euros per person, for 40 minutes. A bar also allows you to eat in the Moorish room, which should soon be followed by others, including another in the Yvelines, at Les Mureaux, scheduled for early 2023.