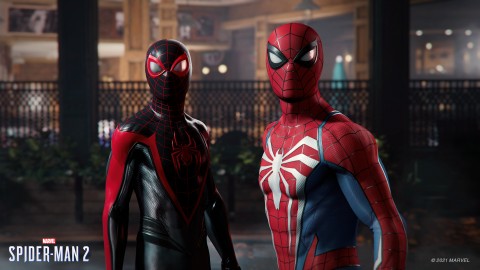 Game News Marvel’s Spider-Man 2: arriving in the fall, the gameplay for very soon?

Suddenly – like this – PlayStation announced the PS5 release window for Marvel’s Spider-Man 2. Enough to make fans of the famous superhero happy, but you know what would be even more fun? Gameplay, of course… Guess that could happen sooner than you think!

Definitely, dropping release dates without warning is the new fashionable sport at Sony! After God of War Ragnarokthis is now the long-awaited Marvel’s Spider-Man 2 who is satisfied with a press release to announce his arrival. So see you in fall 2023 – for now only on PS5 (no mention of ‘exclusivity’ on the PS Blog, probably a reserve for a PC version in the future). Something to please: it’s been a year since we had heard from the software, since its announcement at the PlayStation Showcase in September 2021. On the other hand, no more news or unpublished images to put in your mouth. Just a brief statement from Insomniac Games:

“This has been a great year for PlayStation Studios…hopefully next year will be just as exciting as we continue to prepare Marvel’s Spider-Man 2 for release next fall” – Bryan Intihar, Creative Director of Insomniac Games (PS Blog)

Now that PlayStation has made our mouths water, we would like to know a little more about the project. So the question is when? Well, in recent years, Sony has changed a lot of things about its communication. Even before the arrival of COVID, the Japanese company slowly abandoned the boards of E3, preferring to speak with media like Wired, especially when presenting its PS5, in 2019. Subsequently – in September 2020 then 2021 -, the “PlayStation Showcase” is the Sony event of the year. It is also on this occasion that the manufacturer unveils its largest cartridges: God of War Ragnarok or (precisely) Marvel’s Spider-Man 2. But, in 2022, no high mass for PS4-PS5. According to rumorsPlayStation would like to keep a low profile on the sidelines of the acquisition of Activision-Blizzard by Microsoft, still not finalized.

So, a PlayStation Showcase in early 2023? Unlikely. On the sidelines of the squabble with Xbox, the event seems to have taken root in September, after a June-July-August period often less generous in video games. Ditto for a press release, too light to present the unpublished images of such a big project. There is therefore only the option of State of Play, Sony’s “add-on” format. In 2022, we had the right to four such meetings (September, June, March, January), including one exclusively reserved for Gran Turismo 7. Why not imagine the same for Spider-Man?

Again, some clarification. Even if several ‘first-party’ PlayStation games have had the right to their dedicated airtime, this is not systematic. God of War Ragnarok, for example, did not have its own State of Play (but, instead, an unreleased trailer in September 2021 followed by numerous presentations in the press). As you will have understood, it is not an exact science… Note however thatHorizon Forbidden West, open world like Spider-Man 2, had a twenty-minute solo in May 2021, eight months before its release on PS4 and PS5. News of the title of Insomniac Games could therefore arrive sooner than we think. As a reminder, in this sequel to Marvel’s Spider-Man (2018), Peter and Miles team up to take on Venom in an atmosphere “darker”.

Marvel’s Spider-Man 2: arriving in the fall, the gameplay for very soon?