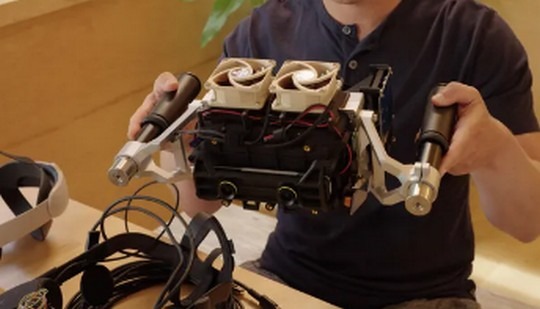 The Quest 2 may be a very good VR headset, but it is still light years away from what Meta aims for. The proof with these new prototype helmets, very impressive.

The companies that were once known as Facebook and Oculus are now united under one banner, Meta. The stated goal is clear: to create a realistic virtual world, the famous Metaverse. To achieve this, Mark Zuckerber’s company must create the most efficient virtual and augmented reality headsets and glasses possible, and this requires enormous R&D work. The CEO thus recently engaged in an interesting exercise, presenting several prototypes of helmets to the media, all of which had a particularity.

It should be noted, above all, that nothing of what is presented here is intended to be released commercially, or at all not in this form. Meta wants to offer a VR headset that is simple to use, compact, comfortable and efficient, all with the most realistic image possible. You will see, this is not always the case with here.

HDR, ultra high definition and depth of field on the program

The Starburst prototype, for example, goes so far as to use two fans on the top and has two handles on the sides. It is therefore not for its ergonomics or its design that it is interesting, but for the fact that it is the first VR headset to offer “HDR” compatibility, with the possibility of displaying a brightness up to at 20,000 cd/m2. A particularly impressive figure, especially when you know that the screen of an iPhone 13, already very bright, rarely exceeds 860 cd / m2. HDR for VR is clearly important and would allow for top-notch realism in rendering quality.

But content with high brightness is nothing without a precise and readable image. On this aspect, we can trust the Butterscotch prototype, which relies on high image definition. Its screen thus offers a pixel density “2.5 times greater” than that of the Quest 2, or 60 pixels per degree. The Quest 2, currently the most powerful headset from Meta/Oculus, thus integrates a screen of 1832 x 1920 pixels per eye. With more than double, Butterscotch can accurately read text from a distance of 6 meters. Again, image sharpness is an indispensable aspect of a future Metavers.

As for the Half Dome prototype, it is downright capable of adapting the depth of field in real time, which is impossible with current helmets. The helmet uses gaze tracking technology to adapt the rendering according to the distance of the object. Here again an important aspect for the realism of the rendering.

Holocake 2: One VR helmet to rule them all?

A sharper, brighter image with depth: three essential factors for virtual reality, and three different headsets. Of course, the goal is to bring everything together in a single product, if possible compact and comfortable. This is where the latest prototype comes in: Holocake 2. This latest mix of virtual reality and augmented reality, like Microsoft’s Hololense, while offering all the embedded technologies… In theory, because, for the moment, Holocake 2 is above all a design, a promise of what VR headsets will look like in the more or less near future.

Finally, remember that Meta is currently working
on “Cambria”
a very high-end headset dedicated above all to professionals, and which mixes AR and VR.

Mark Zuckerberg (Meta) presents his prototypes of VR headsets, and it’s a dream