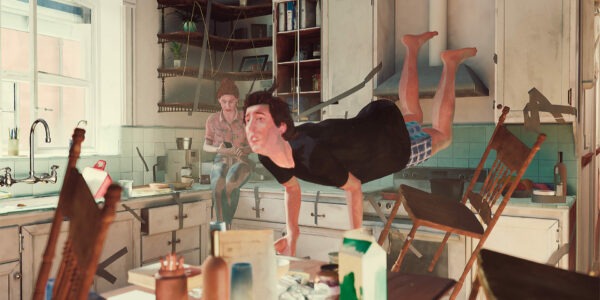 Item 7 and Belga productions, co-producers – with the participation ofARTE – and ARTE France, publisher, are proud to announce that their virtual reality experience Marco & Polo Go Rounddirected by Benjamin Steiger Levine, will be available on February 14, 2023 on Steam and HTC Viveport.

On the morning of his birthday, Marco (played by Emmanuel Schwartz) discovers the cake that Polo (played by Léane Labrèche-Dor) lovingly prepared for him and placed on the kitchen table. He also notices that all the items in the kitchen have been covered with duct tape and twine, as if to protect against an impending storm.

Little by little the dissensions within the couple surface and the joyful atmosphere quickly turns to amazement when the objects detach and fly away around them.
Marco & Polo go round immerses each spectator in the intimacy of a young couple and invites them to physically experience the crisis they are going through through the experience of an altered world, upside down.

The narrative experience in VR Marco & Polo Go Round was produced using a volumetric capture of the actors recorded in live motion, in order to preserve the play of gazes and gestures of the actors, coupled with traditional animation and virtual physical simulations.

Awarded in many festivals, Marco & Polo Go Round is a striking animated short film on the crisis of a couple, which plunges the viewer into their intimacy and invites them to physically experience the upheavals they are going through.
Benjamin Steiger Levine portrays existence through unexpected stories that are both touching and disturbing. This balance between charm and discomfort, humanity and visual wonder, is at the heart of her work.

“Marco and Polo are perfectly complementary characters. They are totally different but those differences make up for what the other lacks. These differences also separate them. Marco takes his time, he believes that the truth can only exist in a perfectly gray space. Polo is a ball of fire and for her the truth means speaking her mind loud and clear.” explains Benjamin Steiger Levine, director of Marco & Polo Go Round.

MARCO & POLO GO ROUND will be available on February 14 Steam and Viveport.