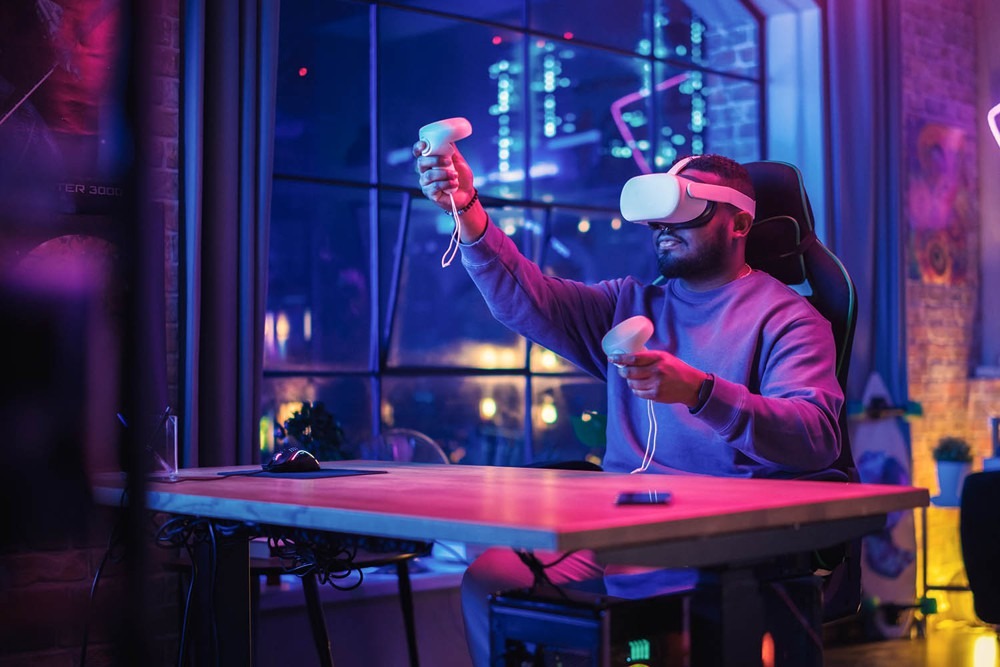 Virtual reality rooms are spreading all over France. Paris, Marseilles, Toulouse, Rennes… Several dozen have opened in recent years, although some have not withstood the pandemic. HAS Margny-les-Compiegnein the Oise, Oumar Adamou has chosen this new niche to become self-employed.

In his Arcades VR Héros room of 630 square meters unearthed thanks to an agent of the Agglomeration of the Compiègne region (ARC), Oumar Adamou offers several activities related to the
virtual reality
and the
augmented reality
.

The flagship activity of the site: a augmented reality sports game, the Hado. This new
e-sport
, which combines virtual and real, is practiced with an augmented reality headset and a connected bracelet. Two teams of up to three players compete in what could be called a “VR dodgeball”, “VR” designating “virtual reality”, or virtual reality. “Players generate fireballs with their hands and aim at their opponents to try to hit them,” explains Oumar Adamou. The games take place in three rounds of 80 seconds and are accessible from the age of 7. ” It’s extremely physical “, assures the manager of the room.

the Hado hits all over the world. To the point that national tournaments already exist, as well as a European Cup and a World Cup. Oumar Adamou hopes federate a whole club around this e-sportand set up a subscription system for regular practice. He also plans to try his luck at official tournaments, in addition to the standard activity accessible in fashion leisure time for a session.

Other activities are also available, such as virtual reality immersion stations, a escape room or even virtual dynamic simulators. “We offer a flight simulator with a virtual reality helmet, another simulator to pilot a motorcycle on a circuit in total immersion or even a ‘double eggs’, a VR cabin for two people, which simulates a roller coaster”, explains Oumar Adamou. .

On the job training

If, today, the manager of Arcades VR Héros seems to be an expert in virtual reality, his beginnings in this emerging sector are, in fact, recent. Forklift driver for eight years, Oumar Adamou converted to
bakery
hoping to open his own shop to the UNITED STATES, a country that has always attracted him. It is also there that he will find his way out, when he is declared unfit for the profession of baker in 2020 due to a back injury. “My dream collapsed, I had to find an alternative,” he says. That’s when I came across a video showing a virtual reality activity. It was already well developed in the United States, and I said to myself that there was an opportunity there to be seized. »

Already a few
franchise networks
positioned themselves on this market, and Oumar Adamou contacted several of them to get a idea. But he finally decides to go it alone, “to build a room to my taste,” he explains. With only 3,000 euros in his pocket, he left for a tour of France of VR rooms forced to close during the pandemic, in search of good deals. “My simulators work very well, and they are all used. This allowed me to save 80,000 to 90,000 euros compared to new equipment, ”says Oumar Adamou.

By purchasing the material, it forms at the same time to the use of these machines with the sellers. Training is also provided to him when purchasing licenses for VR programs. “Getting started is quite simple, and I will train my employees myself so that they are as versatile as possible,” continues the manager of Arcades VR Héros.

In total, the opening of its games room mobilized an investment of around 75,000 euros. To finance it, Oumar Adamou was able to count on his
personal contribution
of 3,000 euros, 16,000 euros in honorary loans from the Initiative France network of Bpifrancean Agefiph grant of 5,000 euros and a bank loan.

The crisis of covidfar behind

Even if the Covid crisis has damaged the world of leisure and several players in this market, the banks have not closed the door to the project led by Oumar Adamou. Even as he sought to raise funds in full during the confinements. “The crisis has caused quite a delay compared to the opening date originally planned. Instead of opening in April, we inaugurated the space in December 2022. But that has not dampened the enthusiasm for the project,” reassures the manager.

On the contrary, he hopes that after the difficult years that everyone has gone through, interest in entertainment will be strengthened. “For two years, people lost all sense of fun. Today, they want to go out and discover new activities,” he says. And rub shoulders with the virtual to escape the real.