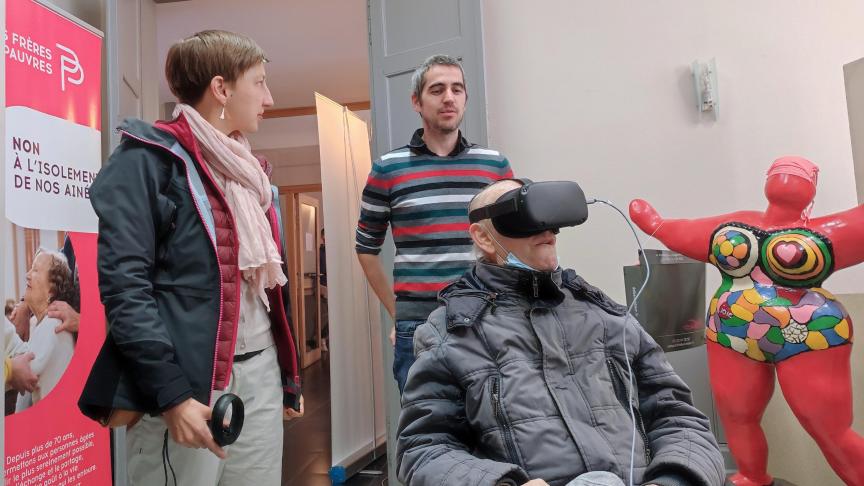 
As part of the European Day of Intergenerational Solidarity which took place last Friday, the Lille branch of the Little Brothers of the Poor association organized a presentation of the various actions carried out by the few young people in civic service within the structure. With their youth, these civic services have also brought skills, particularly in digital technology and have changed habits.

Among these young people in civic service, some are specialized in digital technology, particularly in virtual reality (VR). ” We offer “holidays” in VR. In Greece, Norway, for example “, explains Constantinos, a Greek who came to France as part of the CES (1). If he is normally in Nantes, he came for the occasion to present his work. Educational workshops to learn how to use smartphones, tablets and computers are also offered by the association, which wants to fight against the huge digital divide says Thomas Gallet, social development coordinator at the association.

Jean-Claude, 67, is one of the people supported by the Lille teams. Thanks to the VR headset, he went to Malibu: “ Oh it’s beautifulhe exclaims. The sea is so blue! In the room, smiles light up the faces. For him who is not a great talker as he says, this kind of experience is ” very pleasant. It was my first time doing this and I really liked it! »

Show the usefulness of young people

It is only recently that the Little Brothers of the Poor have recourse to civic services. “
The idea of ​​this day is also to show teams of volunteers that having a civic service can be very beneficial”, explains Thomas Gallet. The association works in small organizations volunteers“ like mini assos, and some are sometimes a bit reluctant “. However, for Béatrice Angrand, president of the national civic service agency, present for the occasion, bringing together isolated elderly people and young people makes sense: “ These are the two categories of people who have found themselves the most alone during the health crisis. It is necessary to fight against the isolation of the elderly but also to help young people so ultimately, this initiative only produces winners! »

Julie, 22, started her civic service last March and no longer wants to leave: “ My parents had been talking to me about civic service for a while because I was in a period of my life where I was lost. When I saw this mission pass, it suited me well. What I like is that we make people happy somewhere, even if it’s only for a few hours. We feel useful. It gave meaning to my life. »

Housing in the Lille metropolitan area: real estate professionals in tune with the MEL

Housing prices in the metropolis of Lille: it is still soaring…

Lille: thanks to a dubious DNA trace, a man avoids a fine of more than six million euros

What is needed is to renovate the existing one. How many buildings in the metropolis are uninhabited? We can’t continue to concrete again and again …Read more

In Lille, the Little Brothers of the Poor are developing digital technology thanks to young people in civic service