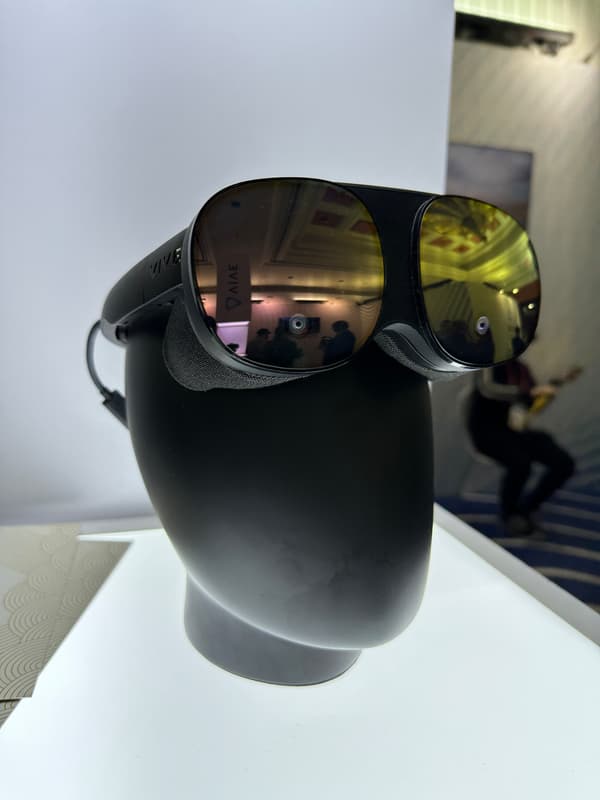 To entertain passengers, virtual reality invites itself into the passenger compartment of the vehicle thanks to Holoride. Associated with HTC and its Vive Flow glasses, the project makes it possible to play in the back taking into account the movements of the car to avoid heartache.

On-board entertainment, the new asset of tomorrow’s car. This is one of the lessons of CES 2023 which closed its doors in Las Vegas. The car is no longer modernized on its chassis, its power or its load for electric models, but on its ability to offer different experiences in the cabin.

During the American show, even the big manufacturers emphasized the multiple functions which will improve the journey for the passengers as well as the assets to keep the driver focused, but relaxed during the journey. This will happen, for example, by adding the voice assistant Amazon Alexa and the Fire TV environment at Jeep for example, a virtual reality headset at Valeo, the software promise from Qualcomm which will be integrated by many drivers like Renault , or through video games, music and all the know-how in Sony’s entertainment associated with Honda. Everyone’s goal: to fight boredom in the car while providing additional technology. And it can also go through video games in virtual reality.

A project led by Audi

Tech&Co was thus able to test Holoride, the possibility given to the passengers of a vehicle to take advantage of a virtual reality headset to play, but without feeling sick to the stomach or any other problem related to the movement of the car. The German startup has teamed up with HTC to base its experience on the Vive Flow, an ultra-light glasses-shaped device that connects to a smart phone to work. Just launch the eponymous application and then pair a Bluetooth controller to enjoy the content (games, applications, streaming, various experiences, etc.).

Audi is Holoride’s long-standing partner with whom it has developed a special package. If you are lucky enough to drive from an A4 to A8, from Q5 to Q8 or even an e-tron model with the Audi Connect Navigation & Infotainment option, all you have to do is connect the VR glasses to the vehicle and to wifi, no smartphone needed. Otherwise, Holoride has pulled out of its Retrofit bag. Glued to the interior windshield, the module connects any car to ensure the experience. It will, like the Audi on-board system, send to the smartphone connected to the glasses all the GPS tracking of the car, the trajectories, the brake strokes and other elements which will sometimes influence the game.

It is at the wheel of a 1967 Cadillac equipped with a Retrofit that the Holoride test takes place. Virtual reality glasses on the head and car crisscrossing Las Vegas, we will test different video games from the back seat of the vehicle. A concern: how to manage the movement of the car without getting sick to the stomach not knowing what is happening around us live. “All compatible experiences have been checked to be able to adapt to the movement of the car,” says Holoride. “The game must adapt in real time to the movements of the steering wheel to avoid any confusion”. This will allow a dynamic and comfortable experience for the player.

Games designed for the road

Good news, Holoride works with 2D or 3D games using a controller. The first game tested, Pixel Ripped 1995: On the Road, has been revised to meet the needs of running on the smartphone associated with the Vive Flow. This all-pixel title revisits classic 1990s games and saves friends from a virtual heroine. To be consistent with the movements, the game has revised its environment. In the glasses, a scene inside a car is displayed. And when it turns right or left in reality, its driver in the game does too. “Sitting in the middle”, the player then has a necessary coherence between the feeling of his body and what he sees, in addition to a fairly fun game.

The second experiment could have been a bit riskier for gagging, but it also fits perfectly. Cloudbreaker is a shooter in which you control a flying robot that must face waves of enemies. A swipe to the right and your scene in the air moves. All this is made possible by the Holoride system embedded in Audi cars or via the Retrofit. The game turns out to be a little more dynamic and nervous than the first, but airsickness is avoided thanks to good fluidity in the movement of the car.

The Holoride experience in the car is most enjoyable and quite pleasant. It remains to be seen what the library made available will really be made up of. The HTC Vive Flow, when it was released solo, was not necessarily rich in possibilities, even if you could have access to a fairly wide selection and a few compatible smartphone applications. For Holoride, we already find a good dozen adapted applications, from games to the availability of a browser to educational courses (dinosaurs, brain training, learning…). Others will come soon after, we are assured.

Finally, perhaps the most annoying comes from the Vive Flow headset itself. It’s a bit large and will tend to slip easily on smaller heads if it’s not fitted properly. Good to know if it is a child or teenager who uses it. The supplied controller will be a little sketchy, but it is possible to use any other Bluetooth controller (even Xbox Series or PS5 DualSense) to play.

The Vive Flow announced in simple use 4 hours of autonomy. It’s more than enough to play in the car before being tired and without battery. It is also possible to use it for streaming and any other smartphone application, but everything will not be adjusted to the movements of the road. Beware at this time of nausea!

The Holoride pack including the HTC Vive Flow, a Bluetooth controller, a security strap and a one-year subscription is announced at 700 euros. It provides access to a catalog of content, experiences and games that are optimized to adapt to the road. Beyond the first year, Holoride will be offered at 20 euros per month (or 14.99 euros monthly in the event of an annual subscription).

Holoride, the experience to play in virtual reality in the car without being sick


Check out our social media profiles as well as other pages related to it.https://yaroos.com/related-pages/