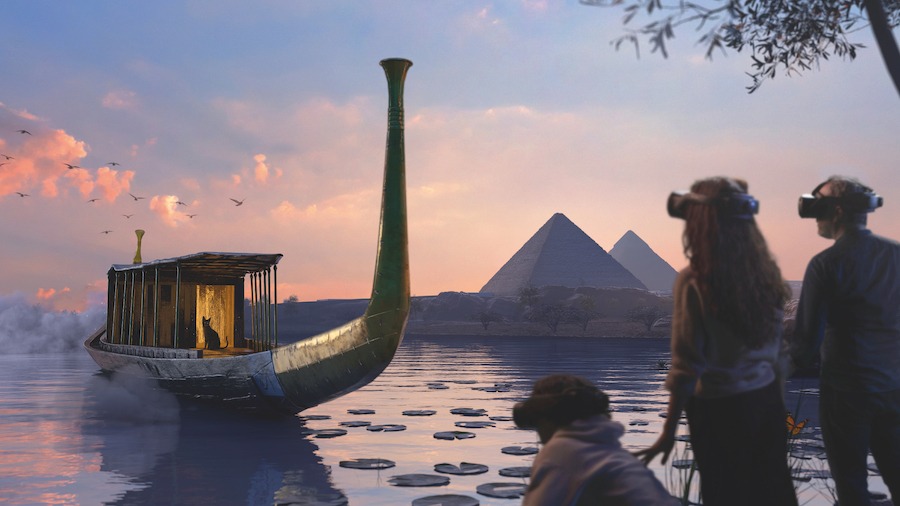 An exhibition at the Museum of Fine Arts

On the occasion of the bicentenary of the decipherment of hieroglyphs, the Museum of Fine Arts of Lyon proposes an exhibition on ancient Egypt. And for good reason, the first director of the Lyon museum, the archaeologist François Artaud, and the decryptor of hieroglyphs, Jean-François Champollion, were friends. The exhibition presents 145 antiquities, as well as correspondence between the two men and unpublished archives from Champollion.

The time of the pharaohs in virtual reality

Who has never dreamed of embarking on a trip on the Nile or discovering the grandeur of the pyramids of Giza as they did back then? It is a semi-fantastic journey of 4,500 years which is proposed, thanks to virtual reality, with the support of an Egyptologist from Harvard University. The narrative is based on “architectural, scientific and historical data” to ensure the accuracy of the information provided by the experience.

The horizon of Cheops, experience in virtual reality.
Monday to Friday from 2 p.m. to 8 p.m. and weekends from 10 a.m. at the Confluence shopping center, Lyon 2e. Rate. 29.50 euros for 45 minutes of visit.

Workshops on Egyptian civilization and courses in hieroglyphic Egyptian, this is what the Lyons Circle of Egyptology Victor-Loret offers for beginners or experienced. About ten sessions are given by teacher-researchers, university professors in Egyptology or tour guides.

On the banks of the Nile at the Musée des Confluences

The temporary exhibition We the rivers at the Musée des Confluences — or how men navigate the rivers, cultivate on their shores and adapt to the constraints and advantages they pose — is also an opportunity to learn a little more about the Nile and its delta. Cradle of a multi-millennial civilization, their modern exploitation raises ecological issues.

In the tomb of Tutankhamun (or almost)

In 1922, Howard Carter and his team discovered the mythical tomb of the pharaoh Tutankhamun. One hundred years later, the two companies specializing in cultural events, Tempora and Europa Expo, have joined forces for a most immersive exhibition in the footsteps of the English archaeologist, on Egyptian society at the time and the life of the pharaoh in tragic fate.

Read also on Tribune de Lyon: Lyons 2nd. We visited the Tutankhamun exhibition for you at La Sucrière

To avoid unpleasant surprises, it should be noted that no original is presented: the hundreds of objects from the tomb have been reconstituted identically by the workshops of the Cairo Museum and loaned for the event. What to take full eyes.

Did you enjoy this article? Continue reading and benefit from all of our articles by subscribing to Tribune de Lyon for 4.9 euros per month. To get to know us better, you can also register for free at our weekly newsletter.