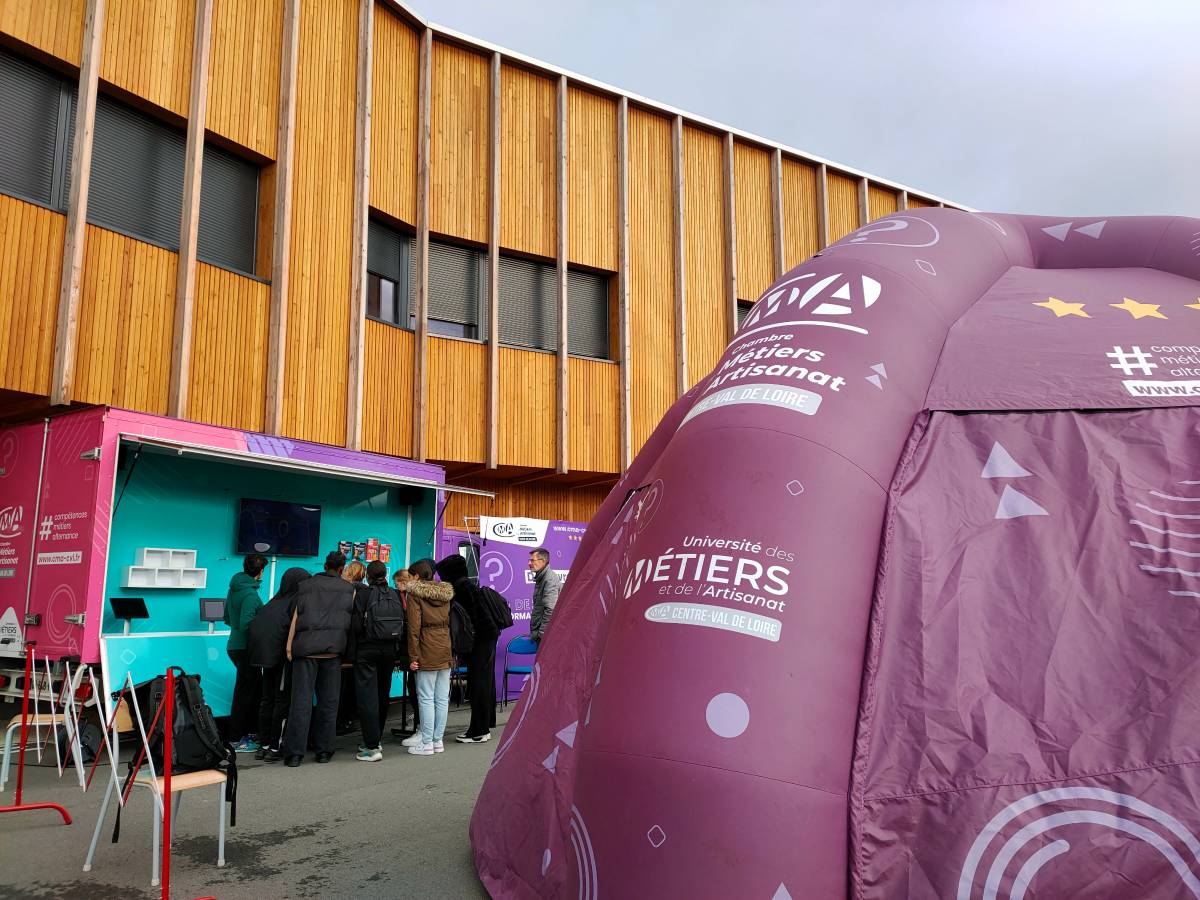 Arrived this Monday, January 9 in the morning in his courtyard, the project “Move your orientation” will remain there until Tuesday evening. After the Jean-Mermoz college in Gien in December, it was the turn of the Orléans resident Jean-Rostand to take advantage of it, more precisely his third-grade students.

Financially supported by the prefecture and carried by the Chamber of Trades and Crafts of Loiret (CMA), the system aims “to support young people who are predestined to integrate a professional sector in September, as well as those still doubting that the sector general is well done for them”.

The orientation and integration advisor at the CMA, Stéphanie Bigot, must have joined eight QPV colleges (priority city districts) by June, in the wheel of a truck that looks like a food truck and this big inflatable tent deployed in the middle of schools.

The project is based “on three workshops of twenty minutes each”. A so-called “mash up” workshop, first, or “a quiz on the discovery of craft trades (baking, hairdressing, cooking, etc.), then, under the tent, another under virtual reality helmets. The images thus projected to the students “allow them to immerse themselves in companies, they walk around in different professions, industry, commerce…”

In the courtyard of the Jean-Rostand college.

Finally, gathered around “a mystery craftsman”, the third must guess his trade by asking him questions to which “he only answers yes or no, otherwise it would be too simple”. Once pierced up to date, “the craftsman explains his journey since the third, which allows young people to project themselves…” continues the project manager.

Stéphanie Bigot will also be able to take the opportunity to reveal to them the local field of possibilities: “The professional sector in the Loiret is more than 500 training courses for 250 trades relating to crafts.”

Against school dropout too…

The delegate of the prefect, Thierry Maubert, completes his remarks from the courtyard of the Jean-Rostand college: “The device Move your orientation arrives on their school time, so that, precisely, they do not waste time”, that is avoided orientation or, even worse, dropping out of school.

During the year, college students wishing to do so can “benefit from after-sales service, that is to say more individual support this time”, to help them refine their professional project.

Perhaps Jacques, 14, will be one of them. By removing his virtual reality helmet this Monday morning, he understands that his heart is swaying: “I wanted to do a real estate agent, but it made me want to turn to logistics.”

The CMA will be able by June to help Jacques see more clearly about his future, if he feels the need.

Education – The “Move your orientation” project will go to eight Loiret colleges by June: what is it exactly?