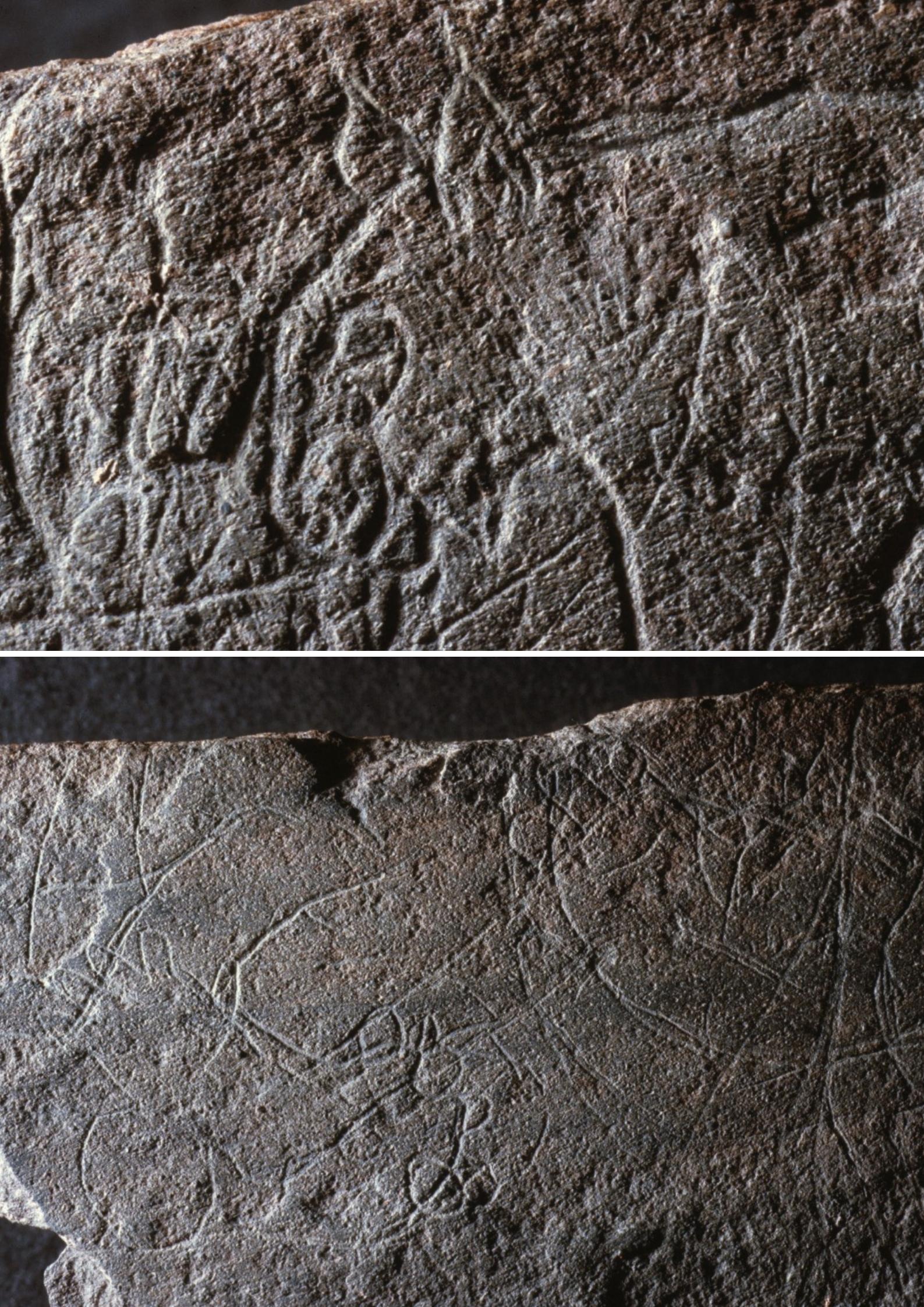 What was the role of fire in the Magdalenian culture, one of the longest in prehistory? This ends with the end of the glaciation 12,000 years ago. With the Magdalenians then disappears the society of the great nomadic hunter-gatherer-gatherers of the Ice Age. A society that practiced all kinds of art, ranging from the famous cave paintings to the most discreet engravings on stone tablets, or engraved plaques.

“We found hundreds of them in Périgord and more than a thousand in the cave of Enlène, in Ariège”, reports Gilles Tosello, doctor of prehistory and visual artist, author of a thesis entitled: “Movable art on a lithic support in the Magdalenian Périgord: emergence, originality and diffusion”. 54 of these plaques, dated nearly 15,000 years ago, are now preserved in the British Museum from London. They come from the cave of Montastruc, in the center of the French Pyrenees, and show traces of burns in places. Researchers from York and Durham have analyzed them using numerous digital tools: modeling, improved color rendering, virtual reality… Their goal? Highlight the potential role of fire on the engraved images of these plates…

Engraved plaque found in the shelter of the Madeleine, in the Dordogne. There are notably a lynx and a human leg.

First hypothesis put forward in this new study: the Magdalenian artists had to work by firelight. Why ? Simply because of their busy schedule during the day. “It is a vision centered on the way of life of the 21e century, which has nothing to do with that of our ancestors”, criticizes Gilles Tosello. Moreover, the light provided by the flames was not to be sufficient for such work. It would thus have been impossible for them to make engravings as fine as those observed on these plates. Some drawings measuring no more than 2 centimeters long!

Second hypothesis: the interaction of the moving fire and the engraved plates would have given dynamism to the figures… and a semblance of life! Indeed, the neurology of the Magdalenians was substantially the same as ours. In other words, these individuals must also have experienced the phenomenon of pareidolia. That is, the identification of familiar shapes from shifting shadows. “This idea is already old. Such animations could have been used during rites or ceremonies,” says Marc Azéma, doctor in prehistory and director. But the result required that these animations be well perceptible and interpretable as such by the human brain, that is to say that the principle of retinal persistence allows the members of the animals represented to be superimposed in the mind of the ‘observer. However, the plates have dimensions that are far too small to obtain a striking effect. 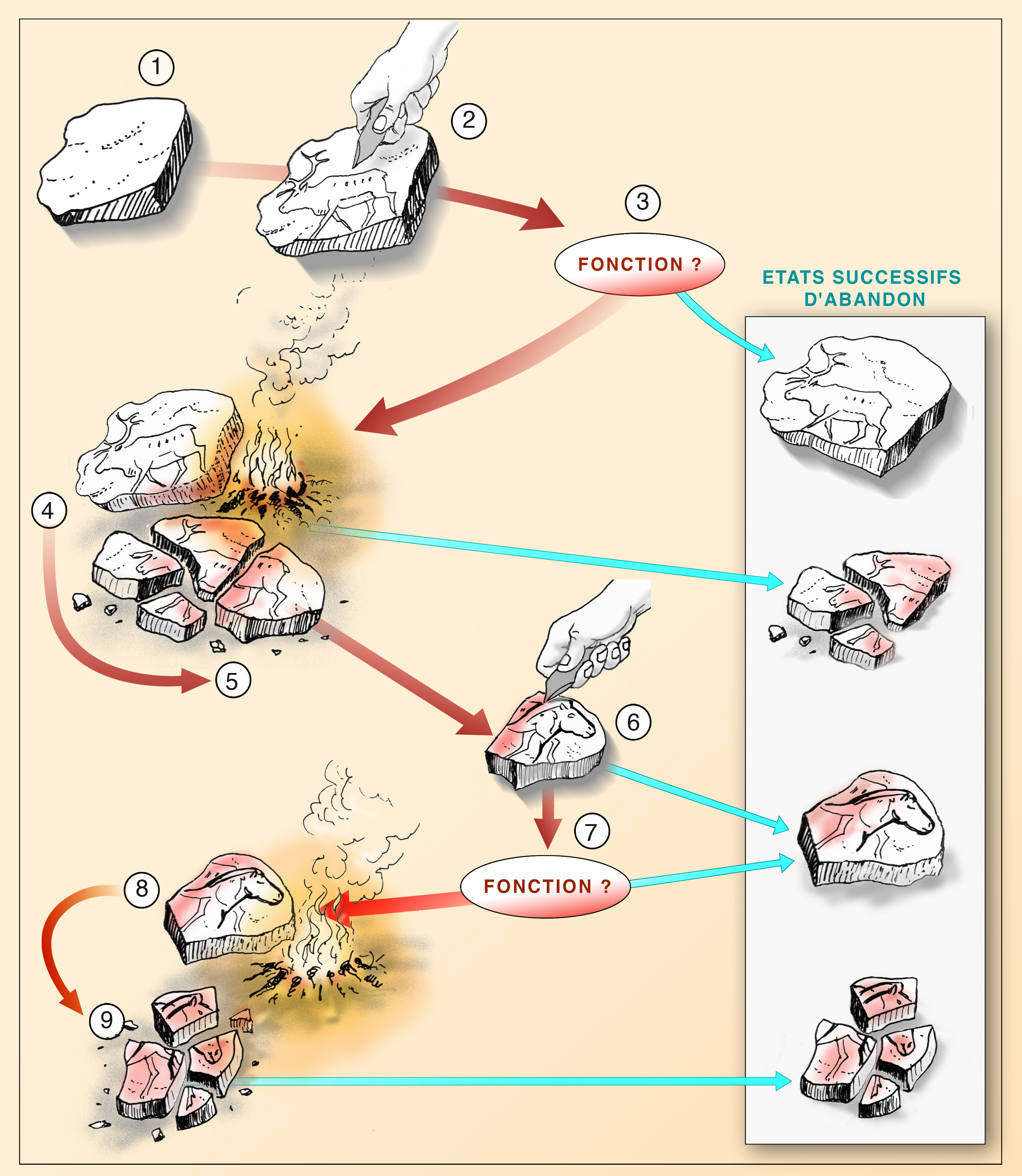 Theoretical “scenario” of the engraving cycle. A blank plate (1) is engraved with a reindeer (2) before being exposed to fire (4). The intense heat causes the soft limestone to redden and burst (5). A piece is recovered to inscribe a horse’s head (6). Then returns to the hearth (8) and breaks up (9).

So what does the use of digital technology bring to the study of Magdalenian portable art? “The complex processes employed have not yielded truly striking results. The methods are topical but we are still at the very beginning”, emphasizes Marc Azéma. Especially since in order to obtain movement, it is not necessary to rely on the glow of the fire. “These populations had a very advanced mastery of illustration, with ingenious graphic processes”, insists the director. An animal could for example be represented running by its posture or the repetition of its limbs, for an effective layering effect.

Of the 300,000 years of existence of Sapiens, the image appears to have appeared only about 40,000 years ago. A recent acquisition therefore, but which has been perpetuated until today. “Representation by image must have provided a vital advantage to populations, at a time when everything around them was thought of as animated”, suggests Gilles Tosello.

On the plates of Périgord are then mainly engraved reindeer and injured or even dying horses. their favorite prey. “These figurative animals were then plunged into the flames of the hearth. It is difficult not to see a link between the destruction by fire and the death given during the hunt, ”suggests Gilles Tosello. Known for nearly 150 years, the engraved plaques of the Magdalenians are still a mystery. What was their role? And above all, what meaning did they have in the eyes of their creators? Questions that still remain unanswered…

Did prehistoric man use fire to bring his engravings to life?