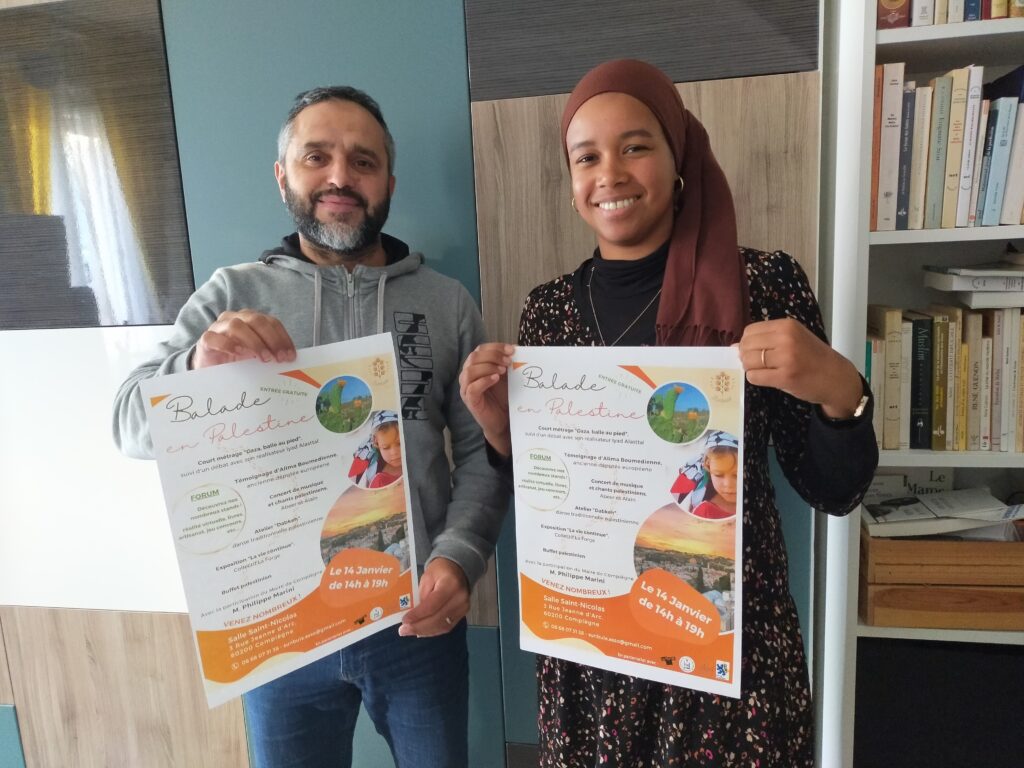 “I invite all Compiégnois to take this walk in Palestinesmiles Sophie Oketokoun, president of the Sunbula association, organizer of this event at the Saint-Nicolas halls, Saturday January 14 from 2 p.m. to 7 p.m. This cultural event, the entrance to which is free, offers visitors a forum with stands for virtual reality, books, crafts, etc.

On the program: the screening of the short film “Gaza, ball at the foot” will be followed by a debate with its director Iyad Alasttal. Also planned is the testimony of Alima Boumedienne, former MEP, a concert of Palestinian music and songs, a demonstration of traditional dance from the Dabkeh workshop, a Palestinian buffet…

“The purpose of our association is to forge links and exchangesexplains its founding president Sophie Oketokoun. This is not humanitarian aid from northern countries to southern countries. When we create the association in 2021, the object is international solidarity. And not only on Palestine…»

“The Palestinians are in an open-air prison”

Sophie Oketokoun received training in humanitarian work, within the association Partage, an NGO (non-governmental organization) for the rights of the child based in Compiègne, which has partnerships with associations in twenty countries around the world: “That’s how I discovered this Palestinian people, its dignity, its peaceful resistance… We feel the duty to carry the word entrusted to us.»

Sophie Oktekoun herself went to Palestine: “I met associations there across the West Bank. This allowed me to set up a trip with about twenty citizens of Montreuil. We traveled the West Bank from north to south, but we did not go to Gaza. There, the inhabitants are in an open-air prison. They feel isolated. The fact that foreign people who enjoy their freedoms come to see them comforts them.»

In the countries where it operates, the Sunbula association (which means “ear of wheat”) relies on local associations that work in education, culture, transmission of memory, agriculture… “We have a craft component to support local producers despite the occupation of their territory by Israel and the economic obstacles imposed on the inhabitants.explains President Sophie Oketokoun. We are confronted with many barriers, to promote responsible circuits.»

Former MEP Alima Boumedienne will come to testify in Compiègne. “She participated in the freezing of economic cooperation agreements between the European Union and Israel, to enforce laws prohibiting the marketing of products from settlementsexplains Sophie Oketokoun. The West Bank and Gaza Strip are Palestinian territories, but there are Jewish settlements of Israel. The EU refuses to market these products from Palestinian lands occupied by Israelis. Palestinians are sometimes forced to work on Israeli land, because they have to live.»

From there was born an associative movement to make consumers aware of the products they buy: “Lots of Dead Sea salt cosmetics still make it from these busy places. There are olives, grapefruits, dates from the Jericho region… We support cooperatives, which are less accessible.»

Even if politics is never far away, Sophie Oketokoun and her vice-president Amine Hamidoune intend to give priority to education, awareness-raising and humanitarian support, in the absence of pro-Palestinian activism: “The founding element is cultural exchange.The association is moving towards decentralized cooperation, where citizens take charge of international exchanges with other territories, through international solidarity actions, such as the workcamps organized in Larache in Morocco and Ziguinchor in Senegal.

Since its creation, the Sunbula association has brought to Compiègne the former minister of culture Anwar Abu Eisheh, still a member of the Hebron municipal council. She is also the origin of the citizen demonstrationwhich brought together 600 people in May: “It was during the month of Ramadan, an opportunity for Israel to redouble its vigor against Palestine.»

A march ended with a speech by the mayor of Compiègne Philippe Marini, who must come and take a leap in this walk in Palestine, as announced on the poster of the event. “In Compiègne, it is possible to organize events in favor of Palestineconcludes the president of Sunbula. When we talk about Palestine, the hairs stand on end. It’s a sensitive subject.»

Compiegne. A walk in Palestine on Saturday January 14 at the Saint-Nicolas rooms – Oise Hebdo