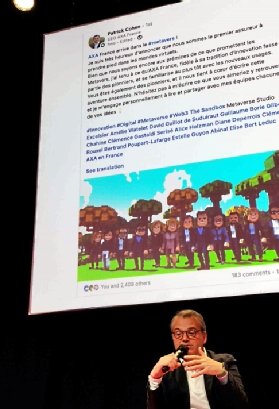 In November 2021, Facebook changed its identity and became Meta. For the American firm, it was a question of highlighting its shift towards the metaverse (or metaverse in English), which he perceives as the evolution of the social network as highlighted in an internal report written in 2018.

His conclusion: in 20 years, the time devoted to the metaverse will be equivalent to that allocated today to social networks. “Facebook is anticipating a massive movement from a digital universe made up essentially of social networks to a three-dimensional universe,” explains Bertrand Wolff, specialist in virtual and augmented reality for companies at the Paris e-Marketing Show.

Not one, but visions of the metaverse

Since Meta/Facebook also owns Occulus, its vision of the metaverse today focuses mainly on the Virtual reality (VR) and the Augmented reality (AR). The GAFAM founded by Zuckerberg also has a virtual universe: Horizon Worlds. But like its current applications, Meta develops closed and proprietary environments.

The ex-Facebook, despite its change of identity, embodies only one of the visions of the metaverse. Another is a more “open” approach where users can also participate in monetization and actually own the digital assets they acquire or create.

The two best-known platforms of this type are Decentraland and The Sandbox. And there is no need to equip yourself with a VR headset to connect to these virtual, immersive and persistent worlds.

Decentraland and Sandbox integrate other technologies, in particular blockchain and tokens like NFTs (non-fungible, unique and non-divisible tokens). These NFT-like tokens can be props and even lands of these virtual worlds.

It is one of these lands, or “Land”, that bought Axa on The Sandbox. For what uses? They remain to be imagined.

The current step is that of marketing and experimentation before a true democratization within the population. The horizon is still far off, although Gartner estimates that people will spend an hour a day in a metaverse-like environment by 2026.

The metaverse: a question of image and anticipation for AXA

“As a pioneer, we are going to explore this world of tomorrow in several ways,” says Frank Desvignes, director of open innovation at Axa, who spoke at the e-Marketing Paris show. “First, we will position our brand in the metaverse. We are also starting to work on topics around innovation and the creation of new types of services”.

The objective is to target the communities established on these platforms, as on Facebook in its infancy. Financial services provider, AXA could imagine services associated with tokens and other NFTs (assets that have a price). However, the market is still too immature to precisely define the contours of such products.

Public blockchains and their applications, including the metaverse, transmit tokens, i.e. value. These digital assets naturally attract the interest of cybercriminals. New insurers are developing and cover, for example, cryptocurrency theft or capital losses.

AXA offers nothing comparable, particularly for regulatory issues. The insurer had certainly launched a blockchain-backed product, Fizzy, in order to automate compensation in the event of a flight delay. But this offer stopped in 2019.

On the other hand, the French insurer is seriously examining the possibilities of metaverses in order to animate its own communities of employees, particularly within its tech teams. These have more than 2,000 people in France and AXA plans to increase its workforce to support its digital transformation.

“Our employees also want to collaborate in these worlds. They’re on Teams all day. They may want to participate in more fun activities,” suggests Frank Desvignes, who also imagines uses for his cybersecurity community.

These immersive collaborative uses are also those that seem to appeal the most to “early adopters”. The ESN consulting firm DXC, for example, has created a “campus” with the application Virbela. DXC held an in-situ press conference there in April to show how it was using the metaverse to host meetings.

As for Meta/Facebook, while it focuses on the evolution of social networks with the metaverse, it is also closely watching the evolution of B2B collaboration – which it is currently targeting with Workplace. To bring companies into these immersive universes, it launched a specific application Workrooms.

Usage grammars remain to be written

Via its branch Axa Investment Managers, the French group is currently participating in experiments around the tokenization of traditional financial instruments, such as bonds. The transaction, carried out in cryptocurrencywas carried out with the European Investment Bank and Société Générale.

In the field of the metaverse, the initiatives are not as advanced. Uses and monetization options currently seem more evident in the areas of luxury and fashion. On March 24, for example, a fashion week was organized in Decentraland with virtual shops, parades broadcast live and sales of NFT (like virtual bags or dresses).

Insurance and finance still have to build relevant applications. And they are not the only ones. “Like the smartphone […], new technologies do not come with instructions. Usage grammars are not yet done. The major use cases have to be invented,” recalls Bertrand Wolff.

The analysis is shared by Frank Desvignes. AXA’s director of open innovation encourages companies to be curious as “the transition from Web2 to Web3” plays out.

Web3, another buzzword? Not for Frank Desvignes. This new generation of the web is characterized by the possibility of transferring value without an intermediary, he summarizes.

“Explore. Be curious. And remember. In 2009, Facebook arrived in France. We didn’t know how to advertise on social networks. Instagram does not exist, ”he compares. “And little by little, professionals have developed techniques.”

“We write the marketing guide at the same time as we explore. For the metaverse, it is being written at the moment,” concludes the AXA executive who, in a personal capacity, owns his own plots on The Sandbox.