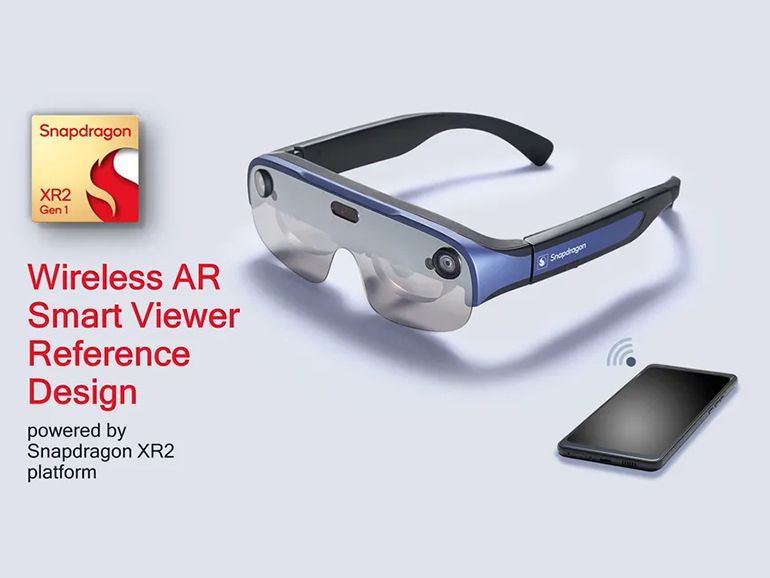 Qualcomm chips are used in most augmented and virtual reality headsets. Also, when the manufacturer releases a new concept, it gives a good idea of ​​the direction taken by these technologies.

So far, augmented reality devices like Microsoft’s Hololens 2 are relatively bulky. Qualcomm has already launched a first wave of bezels (like Lenovo’s ThinkReality A3) connected via USB-C, but this generation suffers from a lack of compatible software, a wired connection and clunky design.

If it is too early to judge the software evolution, the hardware part of Qualcomm’s new concept seems much more relevant. It embeds a Snapdragon XR2 chip (equivalent to that of the Quest 2 of Meta) which deals with processing the images of the on-board cameras.

Compatible with WiFi 6 and 6E (for extremely low latency), they will work in tandem with select Android phones with Snapdragon processors and the space platform.

Spreading the processing load between the phone and the glasses is, according to Qualcomm, the best way forward for the augmented reality glasses of tomorrow, so that they are accessible and usable in everyday life.

For now, these mixed glasses are still a separate category between virtual reality and augmented reality as presented by the Hololens, but Qualcomm foresees a convergence of technologies in the years to come. Anyway, the manufacturer intends to boost mixed reality by pushing wireless connectivity (for example by adding 5G connectivity to larger headsets).

On paper, the proposed features are particularly attractive:

Of course, the glasses stand out compared to classic models with their 15.6 mm thickness and a weight of 115 g, but the manufacturer has managed to offer a more compact concept than that of last year.

A 650 mAh battery is provided in the branches of the glasses, but it is still too early according to Qualcomm to know the real autonomy of such a product. The basic concept offers the possibility of interchanging the batteries, but this kind of detail remains at the discretion of the partners.

Qualcomm has also confirmed that four manufacturers are already working on developing products based on its concept. It will certainly be necessary to watch on the side of Lenovo, Motorola and HTC which are early adopters of the chipmaker’s concepts.

Augmented reality: Qualcomm is preparing a device that blends with the smartphone – CNET France