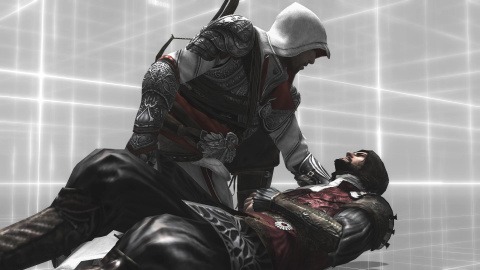 The new virtual reality project around the Assassin’s Creed saga is coming out of the shadows and the first rumors reveal not only a name but also some information on the gameplay side. Obviously, everything is to be combined in the conditional.

The Assassins return to service

It would therefore be possible to find the attractive and charismatic Ezio Auditore da Firenze but also other well-known Assassins of the license. Whether Kassandra fromAssassin’s Creed OdysseyConnor or Haytham ofAssassin’s Creed IIIall of which would be playable through multiple missions.

Assassin’s Creed Nexus could feature 16 individual missions in a linear progression, with backtracking possible. A tutorial would also be included to familiarize you with the mechanics of the game, including stealth, which is an important aspect. So be prepared to sneak into nooks and crannies and pick locks, escape by getting a little high on rooftops, and even take refuge in a pile of hay from an almost real leap of faith. Where this VR episode differs is when it comes to movement. The player would have the choice of simply using the analog sticks or teleporting with a sound system that would serve as a guide in the infiltration phaseswhile having the possibility of combining these two styles of play. Note that this detail could prove to be interesting for people suffering from cyberkinetosis.

As for the fights, they would be based on timing. Obviously, and this is what is expected of an Assassin’s Creed, assassination remains the main strategy to eliminate your enemies. This is where the iconic weapon of the game comes into play: the secret blade. Simply holding down a button while flicking your wrist would stealthily execute your opponents in one shot as long as you’re not spotted. Other weapons would also be at your disposal: swords, throwing knives, crossbows or even smoke bombs, thus leaving you the freedom to diversify your offensives.

Assassin’s Creed Nexus therefore seems to be orienting its project on the basis of an original and immersive experience. Announced in September 2020, together with Splinter Cell VRsources speak of a possible release in the next 12 months, without however knowing the platforms concerned.

Assassin’s Creed VR: the virtual reality episode has a name!