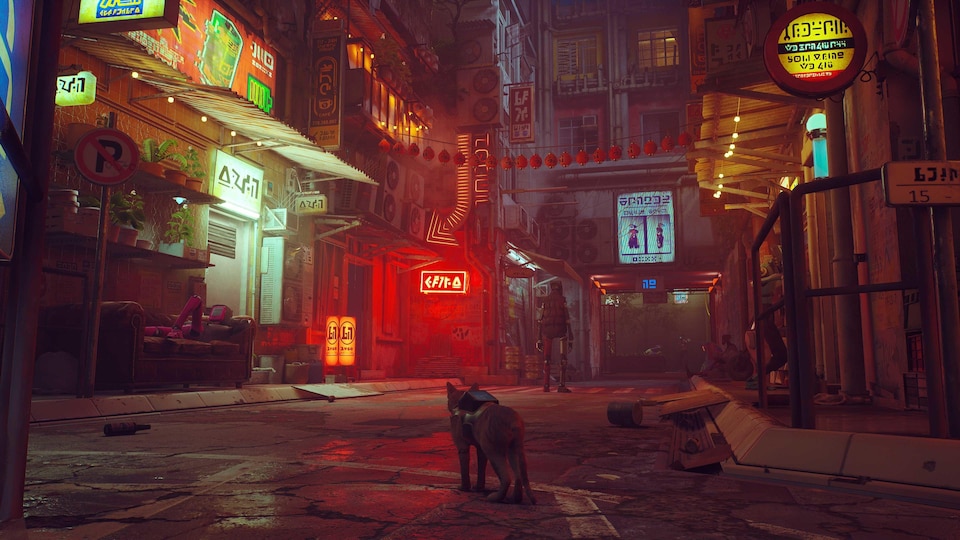 Of course, in 2022, there were the great successes of blockbusters Elden Ring and God of War: Ragnarok. But throughout the year, video games from small independent studios captured the hearts of the gaming community.

Many major video game studios have slowed down production and hiring this year. It left more room for games indies small creators, who have had viral successesbelieves Carl-Edwin Michel, founder of the electronic sports company Northern Arena.

Carl-Edwin Michel highlights in particular the work of Luca Galante, behind the title vampire survivorsa role-playing game available on PC, consoles and iOS and Android phones, which stands out for its simplicity.

The French studio BlueTwelve, for its part, succeeded a masterstroke with stray, a game in which players take on the role of an alley cat. It even won the prizes for best independent game and best start for an independent studio at the Game Awards, the Oscars for video games, presented at the beginning of December.

The “Stray” game immerses players in a “Cyberpunk” universe to make them evolve into the skin of an alley cat.

marvel snapa mobile card game from independent studio Second Dinner, also had its moments of glory, also winning a prize at the Game Awards, that of best mobile game.

It’s hard not to smile while playing the game “Trombone Champ”, released on September 15th.

And what about the rhythm video game Trombone Fieldthe Steam success that made us cry with laughter with a few wrong notes!

The game has amassed over 1 million downloads in its first week of launchand was even up against major titles at The Game Awards for Best Action Game (won by Bayonetta 3) and Best Multiplayer Game (won by Splatoon 3).

On the Quebec side, the largest independent studio in the country, Behavior Interactif, which celebrates its 30th anniversary this year in Montreal, has managed to do well in 2022.

In “Meet Your Maker”, players can create worlds or destroy those of others.

Opening of a second studio in Torontounveiling of major projects, including the new game Meet Your Maker… They did a lot this yearbelieves Carl-Edwin Michel.

” Their horror game Dead By Daylight is a cash cow that works very well for the studio. But they knew how to reinvent themselves and use creativity. »

To reinvent itself, the Mile-End studio does it, and brilliantly! In particular, he launched a dating simulation game (dating sim) featuring characters from its star horror game.

The trapper character from the game “Dead by Daylight” is an alpha male in the dating simulation game “Hooked on You”.

The return to face-to-face tech events

After two years of virtual and hybrid events, the year 2022 has been marked by the great return of face-to-face gatherings.

Apart from a few exceptions, including the cancellation of E3 in 2022 – one of the largest video game fairs which has already announced its return in 2023 –, artisans and craftswomen were able to meet, talk about new trends face to faceemphasizes Carl-Edwin Michel.

” After a dip, we can say that the machine has started again. »

The Game Awards were back in person in December, and the Consumer Electronic Show (CES) is set to open in January. The MEGAMIGS, this major meeting of the video game industry which was held in October in Montreal, re-energized to the creative heads of the industry, believes the columnist.

Everyone was happy to see each other in person. It puts energy, the projects come back, it’s a big plus and it’s good for the economy in generalhe points out.

The green transformation of Ethereum

Cryptocurrencies and blockchain technology (blockchain) have had their ups and downs (mostly) in 2022, but if there’s one success to highlight, it’s Ethereum’s.

The founder of Ethereum, the Russian-Canadian computer scientist Vitalik Buterin.

It was a risky operation, which specialists have compared to replacing a diesel engine with an electric motor on a moving vehicle.

Artificial intelligence and the cloud

Artificial intelligence (AI) could very well be in the tech flops of 2022, especially for AI who steal the work of artistspoints out Carl-Edwin Michel.

But according to the columnist, the democratization of this technology, and its many impressive advances, tip the scales in favor of success.

” The future of AI and machine learning is simply amazing. »

With remote working, more and more companies are using AI and the cloud (clouds) daily. Just think of the virtual office, like the Google suite, or even Amazon Web Services, which provides servers to a number of companies.

These very powerful elements that we have in our hands are part of what we need to make the metaverse work.he says.

” Interoperability, or how to be able to jump from one universe to another while keeping our achievements from one universe, is with the cloud, artificial intelligence and machine learning [qu’on peut y arriver]. »

This is the second time that the metaverse is found in our techno hits of the year. This is not by chance: it is a concept in which Carl-Edwin Michel strongly believes, who unequivocally affirms that he is here for good, despite the skeptics.

Virtual and augmented reality headsets are more accessible, and we talk about them more and more. It’s good, because people understand better what it is, the metaversehe says, pointing to concrete examples such as Fortnite and Roblox.

Metaverse refers to a cyberspace parallel to physical reality where a community of people can interact as avatars. The concept was developed by author Neal Stephenson in the science fiction novel “The Virtual Samurai” (“Snow Crash”).

Carl-Edwin Michel remains lucid: Last year, Facebook changed its name to Meta, and it sounded more like a marketing stunt than anything. Yes, the giant puts a lot of money on it, and it may be a bit too much. There’s always going to be criticism.

The columnist also underlines the imminent arrival of Apple on the market for immersive headsets, which will make people clickaccording to him.

” We have to give this to Apple. They are good for making electronic devices simple to understand. When Apple gets involved, it becomes more mainstream. »

For people who have already converted, new high-end devices are coming to market. In October, Meta launched the Meta Quest Proa high-performance headset that combines both virtual reality and augmented reality, and has an eye-tracking function.

Sony is getting ready to launch PSVR2 in Februarya very powerful virtual reality headset, compatible with the PlayStation 5 console, whose stocks should be bailed out soon, according to Carl-Edwin Michel.

What they wanted to do was a product intended only for video games. It’s niche, they won’t sell 50 million copieshe believes.

Streaming platforms have waged an all-out war on each other this year. Netflix, for example, recorded for the first time in its history in April a drop in its number of subscriptionsbefore report a rebound of it in the fall.

In an attempt to attract more people to its platform, while remaining competitive, the company launched a more accessible subscription formula, with advertisements.

Looks like a throwback, but […] I think it’s positive to have an option for those less fortunate, especially in the current economic contextsays Carl-Edwin Michel.

The columnist even goes so far as to predict that more free ad-supported content will emerge in 2023.

” It’s a return to the model of linear TV channels, but on the web and with advertising. »

In Canada and the United States, the Tubi TV application, available on Chromecast, Apple TV, Xbox and PS4, among others, is already gaining momentum. Let us also remember that Roku, which got its hands on productions from the Quibi streaming appdisconnected after only six months, made its catalog freely available, with advertisements.

The success of BeReal is no longer to be proven, the application having slipped to the top of the house charts of online stores Google Play Store and the App Store.

It’s a spontaneous photo sharing tool that aims to be more authentic than what the competition offers. Once a day, her followers have a two-minute window to post a photo without a filter and using their smartphone’s front and back cameras simultaneously.

In September, BeReal had more than 15 million users.

What I’ve seen on BeReal are young people who post photos that are not very polished, sometimes even blurry and not very beautifulsays Carl-Edwin Michel.

” These are photos that would not end up on Instagram. So yes, we can say that it is more authentic. »

The app caught the social media giants by surprise, many of which added features similar to those that popularized the app, Snapchat to instagram, even going through TikTok.


We have our social media profiles here , as well as other pages on related topics here.https://yaroos.com/related-pages/