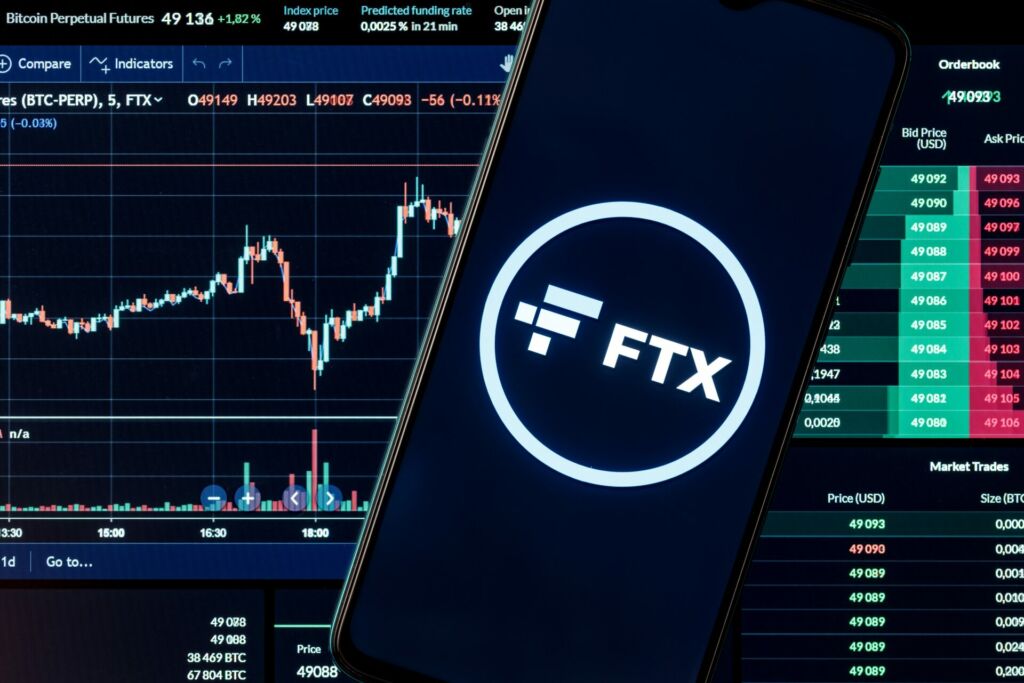 And by eventful, we don’t only mean the negative points, however numerous, to have shaken the world of tech. Tens of thousands of people lost their jobs, large companies have been shaken and shown that they are not unfazed. But 2022 was also a year of success, like with the Steam Deck or the PixelWatch, and ever more impressive innovations. 2022 was undoubtedly a strange one and definitely marked the end of a certain golden age.

Crypto and NFT: after the party, the return to reality

They had met with tremendous enthusiasm during the Covid years, but these trends experienced a year 2022 far from their expectations. It is difficult to summarize this year in detail, but a quick tour should make clear the difficulties faced by the once almighty NFTs and other cryptos.

A monumental drop, the effect of an uncontrolled general bubble and an uncertain global economic and geopolitical context. The exit from the Covid crisis in the world, coupled with the many consequences linked to the war in Ukraine launched by Russia almost a year ago, has shaken a large number of tech players, among many other sectors. . The nail in the coffin? The bankruptcy of FTXamong the biggest crypto exchanges, announced in November and the arrest for fraud of its boss Sam Bankman-Fried.

As a direct consequence of this rout, the NFT market, these non-fungible images sold on cryptocurrency platforms, has lost a significant part of its value this year. As the reports AFPit is not necessarily the number of sales that has decreased (-5% of transactions in the third quarter), but rather the trading volumes and therefore the average value of sales.

In the third quarter, sales volume fell from $7.3 billion to $1.67 billion, a significant drop of 77%. If the sector has lost a huge part of its value, it has also been able to respond in part to the main criticisms attributed to it: its pollution considered too important.

The Ethereum platform, for example, launched last September The Merge, its major software update. A successful and no-frills launch according to an article by The Verge. The Merge has made cryptocurrency mining (and therefore the use of very many power-hungry graphics cards) obsolete, and has reduced Ethereum’s CO₂ emissions by 99.9%.

The metaverse was THE promise of renewal of digital exploration, driven in particular by Mark Zuckerberg. The creator of Facebook had also changed the name of his company to Meta at the end of 2021, with this new strategy in sight. Meta therefore completes its first full year of existence, with results far from expectations. The Reality Labs division has cost the company several billion dollars for its development. The results this year were not up to par, more often arousing ridicule than admiration.

Proof of this is the company’s stock, which was still worth $338 at the end of 2021, is worth just under $117 at the time of writing, having even lived through a period, between late October and early November, below $100. Yes, the metaverse has had a difficult year. Admittedly, Meta is not the only company to have positioned itself in the segment, but the disproportion of its investments in this technology has partly obscured the competition.

We will therefore retain from this year 2022 a launch in majority mocked at Horizon Worlds. The universe in virtual reality presented as a revolution was displayed with graphics considered too dated and “ugly”. A complete failure on which the company responded a few months later. Meta featured more modern finishes. Again, a failure, since instead of what it said was an update ready to be deployed, it was actually only a pre-rendered video, designed specifically to reassure.

Finally, another controversy having turned, again, to derision: the affair of the legs. Horizon Worlds offers the ability to control customizable avatars. But these did not have legs. Meta finally brought what was missing, bringing it to the aid of bombastic communication in the first degree, arousing the hilarity of many Internet users.

Where the metaverse fails, its support has been able to seduce. The virtual reality headsets have known for two years a new impetus. It is also Meta and its Meta Quest that dictate the rules, since the company’s device would represent around 90% of the market share. According to industry analysts, the year 2022 could see the sale of approximately 13 million helmets. 2023 should also experience a similar dynamic, since Apple could finally announce its mixed reality headset.

AI divides as much as it impresses

Another technology that wanted to simplify life and which made headlines this year: generative artificial intelligence. Highly promoted by the Open AI and Midjourney companies with the release, for example, of Dall-E 2 and then of GPT Chatgenerative AI impresses as much as it questions.

Thanks to advances in machine learning, the Dall-E 2 tool, followed by others used for filters on social networks for example, offers impressive images automatically generated from a series of keywords. If the excitement of discovering these powerful tools was in full swing for a few months, the artistic world did not fail to step up.

AI creations are still currently evolving in a legal vagueness that causes artists discomfort, some of whom have expressed their dissatisfaction on the ArtStation site, calling for better regulation of the images generated. The creation of images generated by an AI can indeed harm the (already precarious) employment of artists according to them. Another problem, the AI, for their learning, would draw directly from the creations of artists without their authorization. We will still have to wait to see the arrival of serious regulations concerning AI, starting with a framework on the ease of generating images of a pornographic nature, or even worse.

At the beginning of November, several dozen major tech companies (including Google, Apple and Amazon) launched the unique Matter protocol. This technology simplifies the control of connected objects in the home by allowing compatible devices to be managed in one place rather than going through a multitude of applications and hubs. We will have to wait a few more months to see a sufficient fleet arrive. Matter-enabled connected devices, but companies have already started updating their existing objects. A very practical advance in everyday life.

Still on connected objects, smart watches seem to have finally found their cruising speed. The market is propelled by smaller brands, particularly Indian ones, which offer the bare minimum of functionality. But the biggest brands in the sector, such as Apple or Samsung, have really managed to make the necessary changes, particularly with the deployment of Wear OS 3. And what about the arrival on the market of the highly anticipated Pixel Watch, which we were able to test. Google, for the first time, did very well, bringing a little more diversity to the sector.

Let’s end this segment by quickly addressing the case of smartphones. Although far too many have come out this year to count them, they have not been unworthy in their progress. Thus, 2022 was notably the year when the general public, especially Chinese for the moment, saw the arrival of one-inch photo sensors, the promise of ever more convincing shots. The brands compete in ingenuity to offer not only more powerful smartphones (Qualcomm and Mediatek bring their expertise in chips), but also capable of taking ever more qualitative photos.

The Steam Deck imposes itself, the OLED and the foldings diversify

As Nintendo Switch sales stagnate and the console of the Japanese manufacturer begins to show its ageValve has successfully arrived in the field of portable consoles.

Despite some fears (remember the Steam Machines) and confusions at its launch, the American publisher’s console quickly seduced its audience and made itself available. Not only does it offer a solid and quality design (despite an autonomy to be reviewed), but it also offers the most substantial launch catalog for a console. This makes available to date a little more than 10% of the Steam catalog, i.e. already hundreds of compatible and playable games wherever you are. Valve’s plans for the future of its Steam Deck further add to its status as the must-have console of the moment.

Other brands have shown their desire to position themselves in the portable console segment. Logitech or Razer both announced their consoles specializing in cloud gaming this year: the Logitech G Cloud and the Razer Edge.

However, questions arise. Does the strategy of these consoles dedicated to gaming in the cloud, based on their ability to capture enough wifi or 5G network and not on the power of their components, justify selling prices starting at more than 300 €, not counting the subscription prices of cloud gaming services? Incidentally, one of the leading cloud gaming services, Stadia, will permanently close its doors in a few daysJanuary 18.

Still on the side of everyday objects, folding devices have diversified this year. If smartphones continue to take the lion’s share, computer manufacturers such as Asus and Lenovo have tried their hand at the exercise with the Asus Zenbook 17 Fold and the Lenovo ThinkPad X1 Fold respectively. It will take a little more time to refine the recipe and, above all, to make it accessible (a computer of this kind selling for more than 3000 €). Same story for folding smartphones, whose models are multiplying but remain for the time being confined in Europe to the Samsung and Huawei stables.

To end this tech overview, 2022 saw the arrival of external OLED monitors. If the technology is not new, the monitor market was still not affected by this process. Dell was the first brand to step in earlier this year, with its Alienware A3423DW gaming monitor. Samsung also got started by unveiling its curved OLED Odyssey G8 screen at IFA. Problem, these monitors are still very expensive to buy, with prices exceeding €1,300. The South Korean brand LG has also provided its solution, by offering a smaller and, above all, more affordable screen, announced below the $1,000 mark.

In a few days will open a new edition of CES in Las Vegas, the first physical edition for three years. A real industry barometer, which should already allow us to take the temperature and find out what the trends of 2023 will be in the tech world.