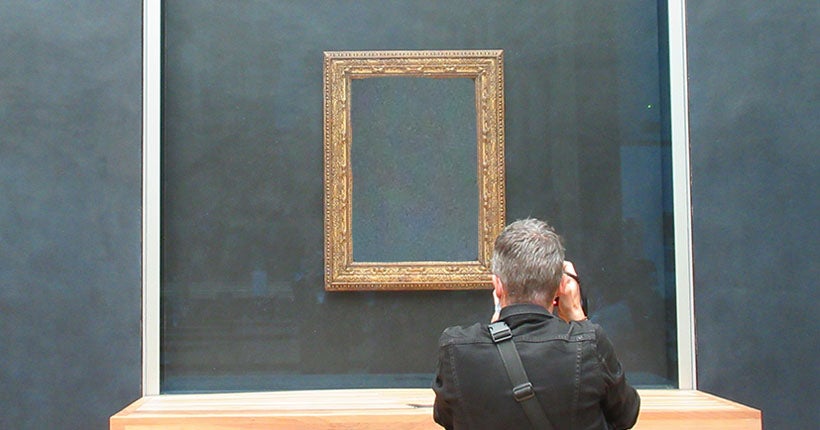 You may have seen the info on TikTok or on Twitter, but if you discover the info here, sorry to tell you: you are over 30, at least in your head. We are sharing here, so we will still explain to you why Internet users believed, and made believe, that the most famous painting in the Louvre had been stolen.

According to the Twitter account Spottersit all started with a video posted by a certain Narvanator earlier this week. It opens with a “POV” (“point of view”, a first-person account) which shows police vans, screaming sirens, crowding near the Arc de Triomphe. “POV: you are in Paris when Mona Lisa just been stolen”writes the user, ready to rush into a subway entrance.

Seeing his video’s popularity skyrocket (reaching over 9 million views today), Narvanator posted a new video showing the States Hall emptied of its Monna Lisa. Seeing the engagement created, many tiktokeur·se·s reimagined this legendary flight on video. A round of jokes has thus been organized by insiders who have fun with this masquerade that fools the naive and naïve – just like the “milk acorn” or the multiple myths surrounding menstruation, swarming on TikTok.

Mona Lisa is regularly the subject of rumors and crazy stories. In September 2022, a video of Squeezie revived a decades-old legend: the Louvre would present a copy of Leonardo da Vinci’s work to its public. “The real one is in basements with particular thermal conditions and if they take it out, it deteriorates the paintwork”said then the youtubeur Billy.

At the time, we had contacted the Louvre who cut short the rantings with a laugh: “It is the real one that is exposed. We are asked the question all the time, the rumor goes around but it is true”before adding that all the “mythology around Mona Lisa [était] a sign of his fame”.

Whether Mona Lisa is today placed under high protection, behind a large armored window which protects it from crowds and ensures a perfect atmosphere, dosed thanks to humidity sensors, it has already been victim of a kidnapping, more than a century ago. In August 1911, a certain Vincenzo Peruggia, determined to see Monna Lisa return to his native Italy, had infiltrated the Louvre when it was deserted, took down the canvas, before wrapping it in a cloth and to leave the building, his loot under his arm.

After having hidden it in Paris then under his bed in Florence, he had presented it to the curator of the Florentine Uffizi museum, who had hastened to alert the police. Peruggia spent six months in prison for the facts committed, thus creating, without knowing it, a legendary story around Mona Lisa. A century later, the story continues to fascinate the crowds since Jodie Foster is currently working on making a movie on the subject.

Why does the whole internet think the Mona Lisa was stolen from the Louvre?