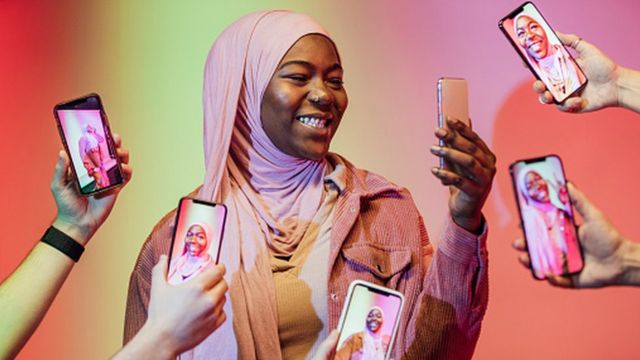 These can be topics and comments about the World Cup or other posts talking about something new, which occupy most users, in what we used to call the “hot topic”, before that it becomes a “trend” with social media scrolling.

Have you participated in commenting on the news of the World Cup when you had no interest in football? Have you been concerned about the truth about Haifa Wehbe’s image in Saudi Arabia? Did you write anything on Facebook and Twitter about World Mental Health Day? Did you voice your opinion on Johnny Depp’s lawsuit against Amber Heard, even though you didn’t know much about the case?

Your answer may be “yes”, although you remember most of these topics now, after your memory has erased them so completely that they may seem like a long time ago.

In any case, you are likely to be constantly wondering about the secret behind the strength of the trend and its impact on individuals.

But how does it happen? How can you resist the power of these trends on social networks? What are the disadvantages of the “trendy culture”, which is often criticized? And why, despite our awareness of these negative aspects, do we participate in them most of the time?

About 30 years ago, a new field of research emerged, the “attention economy”, which owes much to the contribution of the German philosopher and architect Georg Frank.

Frank notes a sort of equivalence between the banks’ relationship to money and the media’s relationship to attention. In his view, saving attention was one of the most important economic revolutions of the 20th century, and it also outweighed all other factors of economic importance.

Many economists and social scientists know that our attention is increasingly becoming a commodity in the “knowledge market” of new technologies.

The attention economy was first theorized in the 19th century, long before the advent of social media, during which advertisers competed for our attention.

For some, the roots of this field are mainly linked to the industrial revolution. The production of large quantities of goods for sale inevitably places great importance on consumer attention, which was evident with the prosperity of the field of advertising and marketing, especially with the advent of broadcast media in the 20th century.

The trend, whether in the form of “challenges” on TikTok or an event that imposes itself, generating a unified topic of discussion and which concerns users around the world or in a specific region, is at the heart of the caring culture. This trend, adopted by thousands, sometimes millions of users, allows algorithms to know our preferences (and sometimes to create them), to manage and target advertisements in a personalized way, which ensures the sustainability of our consumption.

Forgetfulness and loss of sensitivity

“If you’re not paying for a product, it’s probably because you are the product.” This phrase has become essential to understanding the nature of the economic relations generated by the new media.

Thus, by drawing our attention to their content, these sites and applications “sell” us to advertisers. Facebook and Instagram, for example, are just two advertising platforms that make money from users’ attention and time. Trend, in this context, is the fuel of attention. It’s the wheel that keeps you attracted to the homepage for as long as possible.

But American writer Shoshana Zuboff believes the discussion needs to move beyond the attention economy and into what she calls “behavioral excess”. She says the “surveillance capitalism” we live in today aims to track our attentional movements to the extent that our future behavior can be monitored and predicted.

This is probably why ads appear for products that we were only considering buying before we even researched them online. This reality, according to her, confirms that we live in an operating system of which we are the victim.

In the novel “La Lenteur”, the Franco-Czech writer Milan Kundera points out that there is a secret link between slowness and memory, just as between speed and forgetting. If we imagine a man walking down the street, then suddenly he remembers something, without memory helping him at that moment, then he automatically slows down. As for the one who tries to forget a difficult emergency that has just happened to him, on the contrary, he unconsciously accelerates his step, as if he wants to get away from something that is still very close to him in terms of time.

From this equation, we notice the close link between tendency and speed, and therefore between the latter and forgetting. It’s hard to write about an event more than a week after it happened. Looks like you’re digging up the story. In general, no one will care.

No matter how big the event, whether it’s an explosion that destroyed half a city or a man who slaughtered a woman at the entrance of the university, all of this will be forgotten a few days after the end of the event.

The rapid rate of engagement in the trend, the rate of attention, interest, feeling, commenting, thinking and searching, all of which are limited between two periods (between the time of the occurrence of the event and the occurrence of another event that arouses attention and arouses interest), this exorbitant speed often leads to oblivion.

Similarly, neuroscience researchers claim that constant distraction and the habit of rapidly going through a stream of information make it very difficult for memory to retain and store that information.

Similarly, mass technologies cause a kind of numbness of the senses by the emotional saturation they entail. This is one of the drawbacks warned by the French philosopher Bernard Stigler in his approach to the consequences of the “cognitive capitalism” that modern media technology represents on man.

In turn, the American theorist Herbert Simon saw in 1970 that the more societies generate and disseminate information, the less they have the capacity to absorb this information and the capacity to receive, process and understand it. Therefore, it was concluded that information-rich societies are attention-deficient societies.

Why are we carried away by the mainstream?

Although we feel the negatives of trending culture and sometimes criticize the torrent of sweep represented by intense posts on a topic or issue, we often find it hard to dissuade ourselves from being affected by this trend. So what is the reason?

In 2004, the term “FoMO” appeared for the first time, which is an acronym for “fear of missing out”. The term was first used in the field of marketing, but it reached its peak with social media.

Jumping into the torrent, instead of just looking at it, shows the pressure that the power of the present exerts on us. It reflects the desire to seize the present moment, and to be present, in order to resist the flow of time which always exceeds us…

And the desire to be present, to exist “now and here”, even virtually, can essentially come from the fear of death, even if the “symbolic death” is due to our disappearance from the public sphere.

Gaining recognition from others is a key reason for being on these sites and expressing yourself through them. The recognition of the other is, for many, the unit of measurement of self-esteem.

This brings us back to what is known in psychology as the “bandwagon effect”, i.e. when people do something in the first place because others are doing it too, because participation to the trend reinforces the feeling of belonging to the group. This is evident in the political and consumer trends of human beings. The field of advertising is historically known to play on this effect, to attract consumers and guide their behavior.

Some worry about this trend because it threatens human individuality and fulfills its worst nightmare of making the individual a mere mirror of the crowd. It is as if he were to become the person against whom Nietzsche warned in the fragments published after his death, saying: “Man forgets to act, he only reacts.”

What’s the secret to the power of “trend” on social media? – BBC News Africa