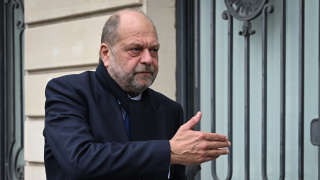 Dupond-Moretti draws a mobile app to “simplify the lives of litigants”, between simulators and geolocation

POLITICS – Vendôme App. Éric Dupond-Moretti announced this Thursday, January 5, his intention to create a mobile app to bring citizens closer to the judicial institution, during the presentation of its action plan for the justice.

” After an initial imperative of efficiency “, for which the former tenor of the bar has announced major human and financial resources“ comes naturally the second imperative which is that of proximity, aimed at simplifying the lives of litigants, to bring them closer to their justice”, he explained during a press conference at the Ministry of Justice.

It is therefore in this perspective that his ” smartphone app should be launched in 2023, from the month of April “, according to his promise.

🔴⚖️ The Keeper of the Seals @E_DupondM presents his plan for justice. “The second imperative is that of proximity…

An object, digital, which should allow the French to obtain a certain number of tools, in their “pocket”, according to the words of Éric Dupond-Moretti, to better understand and know the institution.

So much for philosophy. In detail, the Keeper of the Seals explained that this application would include simulators to calculate the amount of alimony, indicators to understand legal aid or identify the places of justice in his area. ” You can also geolocate yourself to easily access all the useful information about your court, locate the nearest justice point, or find a lawyer or notary. further explained the Minister.

The second version of the application, scheduled for 2024, should open up other possibilities. Not the least, since it will be so ” possible for a victim to request compensation in this way before the criminal court or to apply for legal aidadded Éric Dupond-Moretti, according to whom the telephone will also be used for making appointments by the integration and probation adviser. Or send hearing reminders by SMS. »

So many novelties that are part of a more global ambition for Éric Dupond-Moretti: to make the judicial system ” more fluid, simpler, closer », to stem the gap that is growing between the French and their courts. The Keeper of the Seals has set himself the key objective of halving the time for civil proceedings (currently increased to two years on average) and completely overhauling the code of criminal procedure. A promise from Emmanuel Macron.

It now remains to know the fate of the new ministerial application… At a time when these do not always meet with great audience success. We remember for example StopCovid, who was not not a failure, but did not work »in the words of Emmanuel Macron, or the “My safety” application, launched by Jean Castex last spring. In fact, we don’t remember that much.

What will the mobile application just announced by the Minister of Justice be used for?