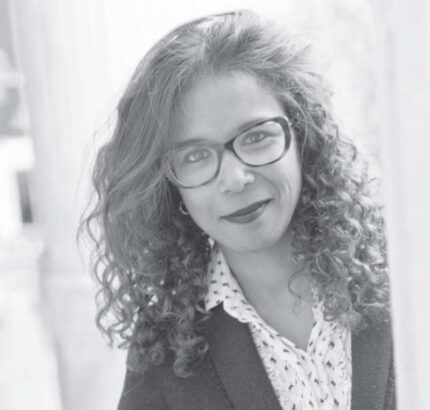 This is one of the topics that ignited the 2022 edition of CES, the global high mass of tech. The bosses of Silicon Valley devote heated debates to it, the followers of the cryptocurrencies swear by him: the web3, a decentralized internet in which users retain control over their personal data, a vision fueled by growing mistrust of the undisputed masters of web 2.0, the Gafams (Google, Apple, Facebook, Amazon and Microsoft), is on everyone’s digital lips. With Facebook mired in scandals like Cambridge Analytica, recommendation algorithms acting as a black box, and Google and Apple controlling mobile app stores, web3 seems like an essential way out. But it divides. For some, it is a real revolution in progress, for others, an unattainable utopia, and some detractors even see it as a huge speculative bubble linked to cryptocurrencies. Why ? Let’s decipher.

>> Read also: NFT, Bitcoin… How are blockchains shaking up the markets?

WEB3: SEEN FROM THE EXTERIOR, THE SAME APPEARANCE, BUT A DIFFERENT ARCHITECTURE

It must first be understood that for the user, the web3 as imagined would materialize in the same way as the internet as we know it. It would be composed of websites, payment solutions, mobile applications… In short, its appearance would be quite common. Its true specificity lies in its architecture. Because to extricate itself from the Gafam, the web3 would rely on the blockchain, the technology at the origin of the cryptocurrency.

Founded in 2009, Bitcoin remains to this day the first large-scale monetary exchange system completely independent of banks. Instead of a single, centralized validator, transactions are verified there by a multitude of network users. And it works : “Bitcoin has been running without bugs or hitches for thirteen years, which is a brilliant technological achievement”, greets the mathematician Jean-Paul Delahaye, professor emeritus at the University of Lille 1. The developers of web3 thus hope that, after having revolutionized finance, the blockchain attacks the Internet. And to do this, they rely on the advances made in 2015 by a particular blockchain: Ethereum. When Bitcoin is only able to manage simple transactions, it runs small computer programs, called “smart contracts”. “As with monetary transactions, the fact that smart contracts run at the same time in all users makes their results indisputable”, says Sonia Ben Mokhtar, research director in distributed systems at the CNRS. In theory, it is therefore impossible to violate the rules dictated by the program, nor to centralize all its data. Several decentralized applications, called “DApps”, are already based on these smart contracts and by extension, they touch the web3 dream by completely freeing themselves from the control of multinationals. Available online, LBRY offers for example a video service similar to YouTube while Leeroy imitates Twitter.

The history of computing is punctuated with technologies that were decried and then ended up revolutionizing our daily lives – SONIA BEN MOKHTAR, Director of Research in Distributed Systems at the CNRS

Problem: if this operation is marvelous on paper, in practice, these applications are slow and not very ergonomic. Limitations that come from the very principle of the blockchain: validating each operation by a multitude of users is a long and energy-intensive process. “Today, we are therefore obliged to limit the size and complexity of smart contracts”, explains Sonia Ben Mokhtar. This at the cost of their attractiveness! “A DApp can only render a service equivalent to that of a centralized application at the cost of greater complexity”, laments Julien Gossa, lecturer at the University of Strasbourg. It will probably take patience to see DApps mature. “Early versions of WhatsApp or Facebook were places of what they are todayrecalls Sara Tucci-Piergiovanni, Director of the Intelligent and Distributed Systems Laboratory at the CEA. Ten years from now, the user experience will be much better for blockchain services. »

In line with this prophecy, a myriad of new blockchains like Solana, Elrond, Tezos or Avalanche have emerged in recent years. With them, promises of ever smoother transactions and more efficient smart contracts. Other so-called “level 0” blockchains like Polkadot even strive to create bridges between blockchains, and ensure interoperability between the different DApps. Little by little, web3 is getting organized.

But critics point to another problem: that of data storage.

>> Read also: In 2245, our digital data could weigh half the mass of the Earth

“As each validator must be able to store all of the blocks validated from the start, a blockchain cannot itself store heavy files such as photos or videos”, explains Jean-Paul Delahaye. Its operation would become unmanageable. In practice, therefore, the blockchain hosts the only proof of validity of the exchange, the files themselves being stored on traditional servers. However, these servers are managed either directly by the company that developed the DApp, or by cloud service operators, two centralized services! Back to the starting point: what’s the point of decentralizing applications if large companies still have our data on their servers? game-over for web3? Not sure.

Because other innovations, coming from the field of cryptography, would be on the point of solving this point of friction. One of them is called “zero-knowledge proof”, or “zero knowledge proof”. Behind this twisted name hides a high-flying mathematical sleight of hand, which was also awarded the Turing Prize in 2012. 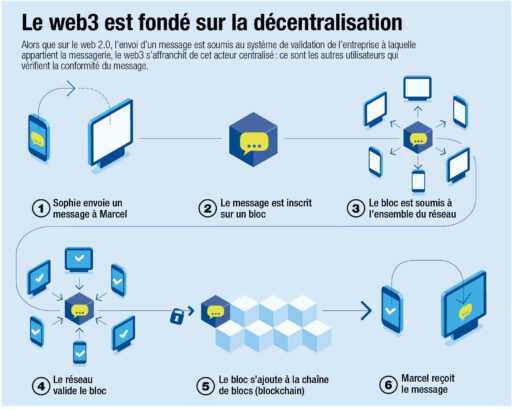 “This protocol makes it possible to exchange evidence about an object without disclosing anything about this object.explains Daniel Augot, professor of cryptography at the École polytechnique. For example, it allows you to prove that you are over 18 without giving your age or your passport. ”

>> Read also: Solid launches the battle for personal data on the net

Web 1.0 (1991-2004) Dedicated to the consultation of e-mails and websites. The network architecture is then widely distributed among the computers.

Web 2.0 (2004-present) Development of interactive exchanges and birth of social networks. Architecture is concentrated in the hands of a few players (Google, Amazon, Facebook, Apple, etc.).

A NEW GENERATION OF SECURE PROCESSORS

This advance could allow users, holders of cryptographic keys, to define who can access their data and under what conditions. Concretely, this means that your photos, messages and others, although stored on the server of a large company, could not be consulted by the latter.

At the same time, a new generation of secure processors, like the Intel SGX, make it possible to make confidential a batch of data or lines of code via a physical encoding system. Once again, these secure processors are limited, because they are very intensive in calculations, while the “zero knowledge proof” is unable to house large amounts of data.

“But these technologies are progressing very quickly”, believes Sonia Ben Mokhtar. For his part, Gilles Fedak, former Inria researcher and founder of the iExec company, recalls that “Web 1.0 only really exploded when cryptographic protocols like https enabled secure online payments. It’s the same story with web3, which will develop thanks to the addition of blockchain and confidential computing”.

The path therefore seems well marked for web3. A major, if not paramount, question remains: will users be willing to leave centralized applications for DApps?

“Alternative services aiming to decentralize the web have already been developed… without however encouraging adoption beyond the geek communities”, says Julien Gossa. The list of these unjustly forgotten applications is long: we can cite Diaspora, an alternative to Facebook, Mastodon, a competitor to Twitter, or PeerTube, against YouTube…

This is why, according to many observers, the possibility that web3 will replace the current web is an illusion. This new version could only come as a complement. “The web3 will probably give rise to new uses without making the old ones disappear.predicts Gilles Fedak. Look, web 1.0 email services and sites have not been replaced by web 2.0 social networks. »

How to limit the energy needs of the web3?

Based on newer blockchains, the web3 could avoid the energy catastrophe of Bitcoin. Because since 2009, transaction validation systems have evolved: from “proof of work”, we have moved to “proof of stake”. In the first system, the verifier puts his computing power at the disposal of the network, while in the second, he commits an amount of money in cryptocurrency to it. A way to show your credentials, because these sums are confiscated in the event of attempted fraud! According to a recent study by University College London, “proof of stake” consumes 1,000 times less energy than “proof of work”, which is about as much as a simple Visa transaction.

Still, here and there, the first beginnings of web3 appear. We can cite “play to win” video games ( “play to earn” ), which reward in cryptocurrency the progress of the user, or the issuance and exchange of digital certificates of ownership, the famous NFT. “For the moment, these uses essentially concern virtual worlds with their own life and economy, which could be grouped under the term metaverse”, summarizes Sara Tucci-Piergiovanni. In the longer term, other uses could emerge around the commodification of personal data from the Internet of Things. “If I have a connected watch, I can decide to control access to my cardiac data, opening them to my cardiologist, but cutting them off to my insurer”, illustrates Gilles Fedak. Similarly, we can imagine that thanks to web3, individuals could one day monetize the loan of their autonomous car into a kind of Uber3, or even the energy produced by their photovoltaic panels in a logic of exchange from individual to individual.

What is certain is that web3 has many surprises in store: “The history of computing is punctuated with technologies that were decried and then ended up revolutionizing our daily livesconcludes Sonia Ben Mokhtar. I think of neural networks in which no one believed for decades and which are behind major advances today Who ” . dare to predict the internet of tomorrow?

>> Read also: The hidden face of the metaverse: what impact on the real world?

Web3: this is the internet of the future