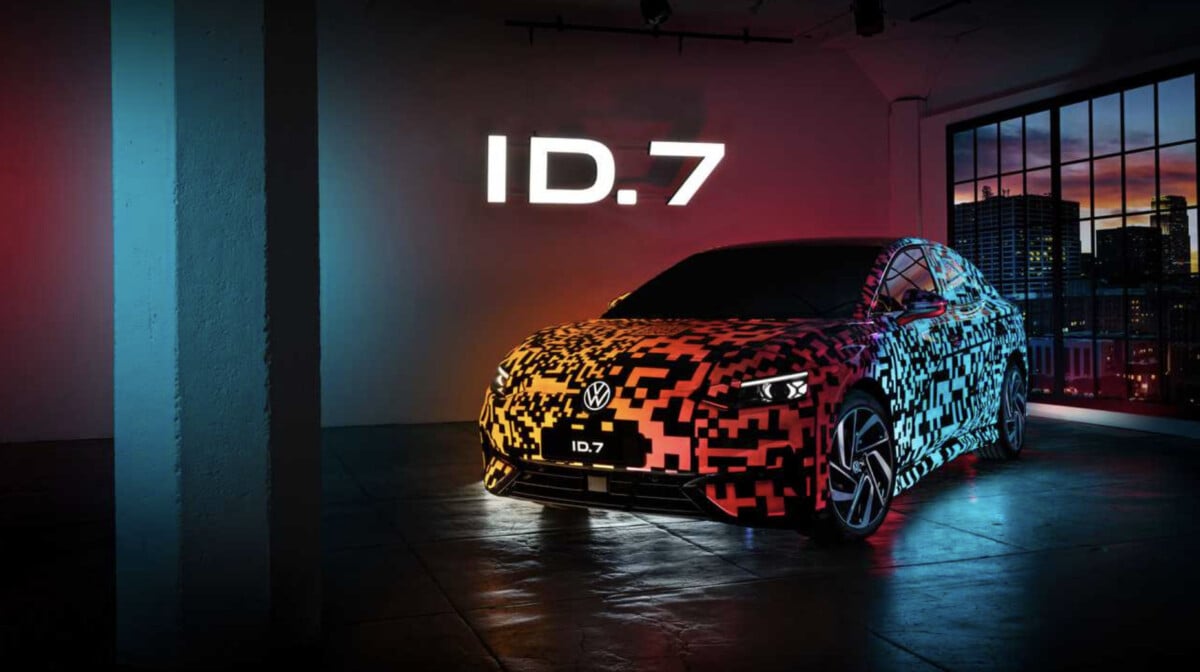 On the sidelines of CES in Las Vegas, Volkswagen has just (partially) lifted the veil on its first 100% electric sedan, the ID.7. On the program, a range of 700 km, a large 15-inch touch screen and nearly five meters long.

The Volkswagen group’s 100% electric range is already particularly well equipped, especially compared to some close competitors. There is of course the Volkswagen ID.3an electric compact, the ID.4 and ID.5the two SUVs, and the friendly ID. Buzz which echoes the Combi of yesteryear.

But in this range, it is obviously missing the sedan, a segment that has not really had the wind in its sails in recent years, but for obvious reasons of efficiency and aerodynamics, this body could well find itself again in the front of the scene.

On the sidelines of CES in Las Vegas, Volkswagen presents (or formalizes, should we say) the new ID.7its first 100% electric sedan, which follows at the ID concept car. Aero presented last year.

Very big, but above all very high

For now, Volkswagen has unveiled a camouflaged prototype of the model, although the dimensions and lines that stand out are final. The Volkswagen ID.7 is based on the MEB platform of the Volkswagen group. It measures 4.94 meters long and its gigantic wheelbase of 2.97 meters suggests a beautiful space on board.

On the other hand, the car is 1.54 meters tall, which seems particularly high for a sedan. For comparison, a Passat sedan, which is its thermal counterpart in a way, is nine centimeters less in height.

Aesthetically, the set looks rather wise and is generally inspired by the lines of the ID concept car. Aero. According to the first elements communicated by Volkswagen, thee Cx would be between 0.23 and 0.24a data similar to the Tesla Model 3. 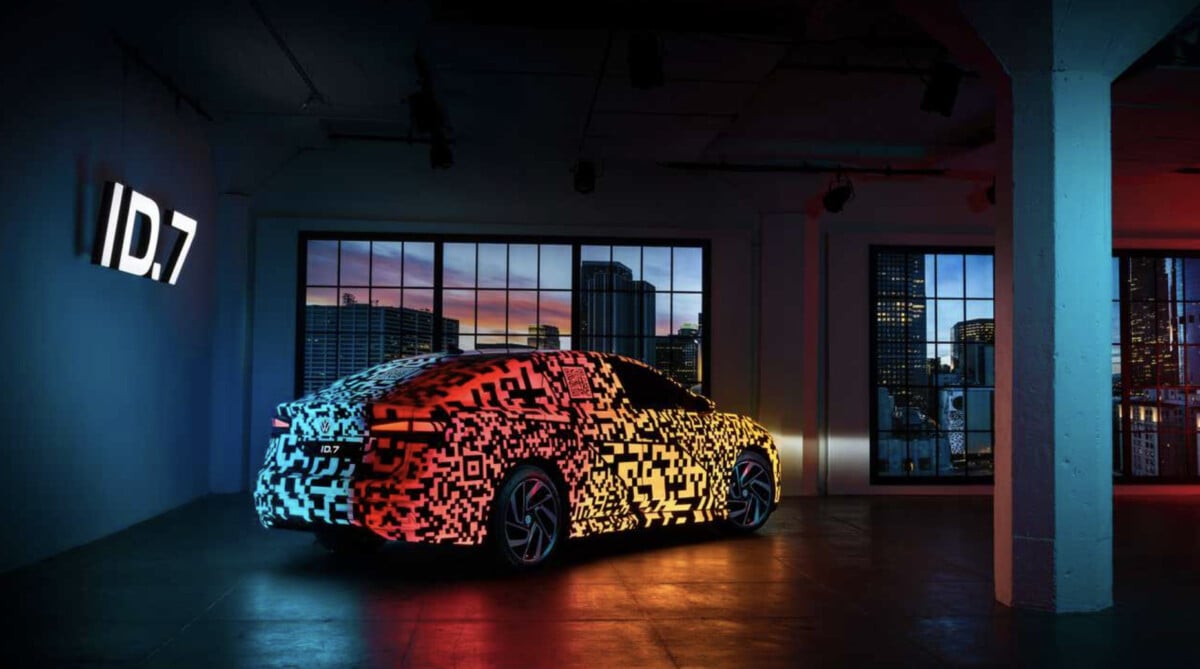 The best range in its segment?

Technically, Volkswagen has not yet revealed anything about its ID.7, except that it will have the right to a range of up to 700 km. This is much more than was previously possible with the MEB platform. As a reminder, the ID.4 can travel up to 526 km with the large 77 kWh battery.

This data of 700 km is probably not reached with the same battery, even if the aerodynamic optimizations have certainly made it possible to arrive at this very good figure. We then imagine a battery with a capacity of at least 90 kWh, which would be allowed by the new MEB-Evo platform, recently presented by the German group. The Volkswagen ID.7 is also positioned better than a Tesla Model 3 Long Autonomy (602 km), the Mercedes EQE (639 km) or the BMW i4 (593km).

As far as the different variants, engines and finishes are concerned, it is status quo, Volkswagen hasn’t revealed anything yet either. There will certainly be an entry-level rear-wheel drive version with a single motor, and several versions with two electric motors and four-wheel drive. A version GTX a bit sporty is not to be excluded either.

A true compendium of technologies

Inside, the Volkswagen ID.7 impresses and does not disappoint. Exit the disappointing dashboard of the ID.3 and ID.4, make way for something in the same spirit, but which seems more upscale and more in line with the claims premium access from the manufacturer.

The dashboard plays the horizontality card with a large 15-inch touchscreen to control the entire infotainment system. Another positive point, and not the least: this screen integrates new software with a new user interface that is, according to the manufacturer, “much easier to use”. 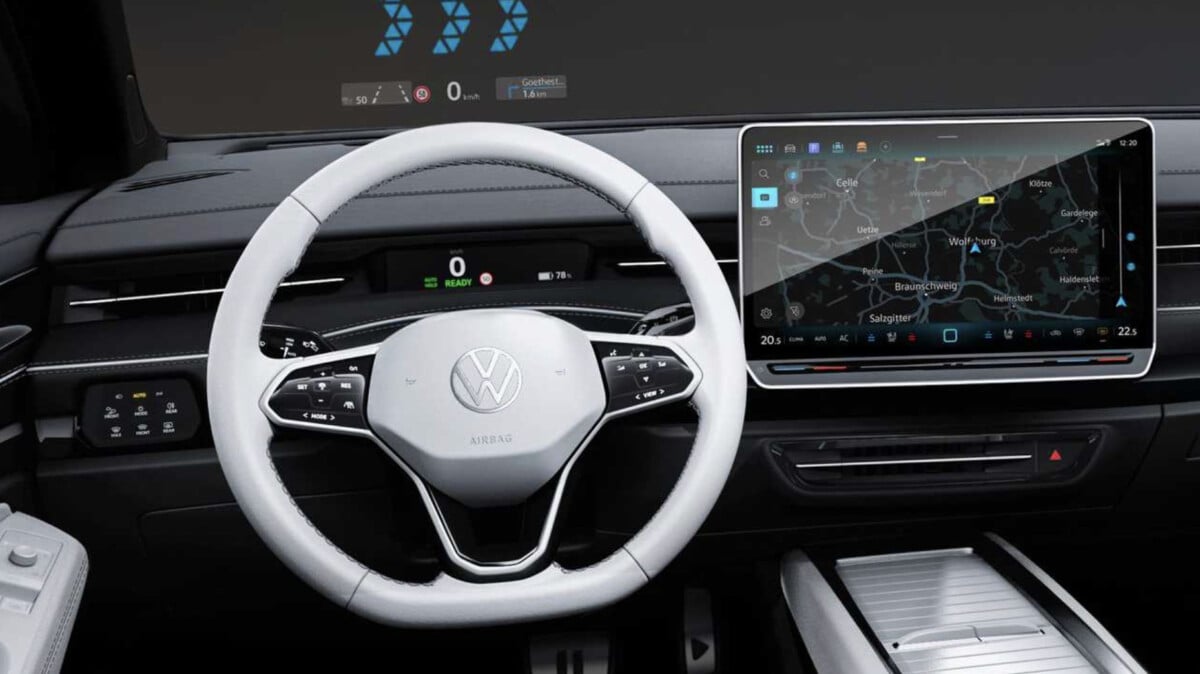 The best example is the climate control controls which are now permanently displayed at the bottom of the screen, i.e. they are no longer hidden away in countless sub-menus as is the case on other ID models. As you can also see from the few photos shown, the head-up display is also completely new.

Volkswagen has integrated some interesting technologies, including the “Smart Air Vents” function, which dynamically controls ventilation flows in the passenger compartment to ensure faster hot or cold air distribution. Via the key, the car can also anticipate the driver’s arrival in the passenger compartment and directly switch on the ventilation before he enters the car.

The ID.7 is equipped with a more precise voice control and equipped with an artificial intelligence making it possible to “learn” the habits of the driver in a way. For example, the voice command reacts to “Hello Volkswagen, my hands are cold! » by directly switching on the heated steering wheel and diverting the flow of hot air towards the hands.

If you find the paint strange on the prototype presented by Volkswagen it is also normal, since it is. It is in fact an “intelligent” camouflage composed of 40 layers of paint and a surface divided into 22 remotely controlled electroluminescent zones. By connecting the car to an audio system, the paintwork lights up to the rhythm of the music. A technology that we will probably not find on the production version, but it is rather nice for the presentation of a model.

See you in the fall

Obviously, we wonder when the production version will be presented. Its production should begin in the second quarter of 2023, its final presentation should therefore take place within a few weeks. The car will first be launched in China, the European market launch is planned for autumn 2023.

An estate version should also arrive in 2024 and follow at the ID concept car. Space Vizzion presented recently. Like the Volkswagen ID.4, the ID.7 will be built at the plant in Emden, Germany.

In terms of price, we should be in the range between 50,000 and 70,000 euros, which would allow us to have one of the best autonomy-price ratio on the market.

The Volkswagen group is changing its strategy and upsetting its plans for its future electric cars. After the postponement of the Trinity project, it is the turn of the SSP platform to be delayed, thus lengthening the life expectancy…
Read more

Volkswagen ID.7: a new electric sedan with more autonomy than a Tesla Model 3