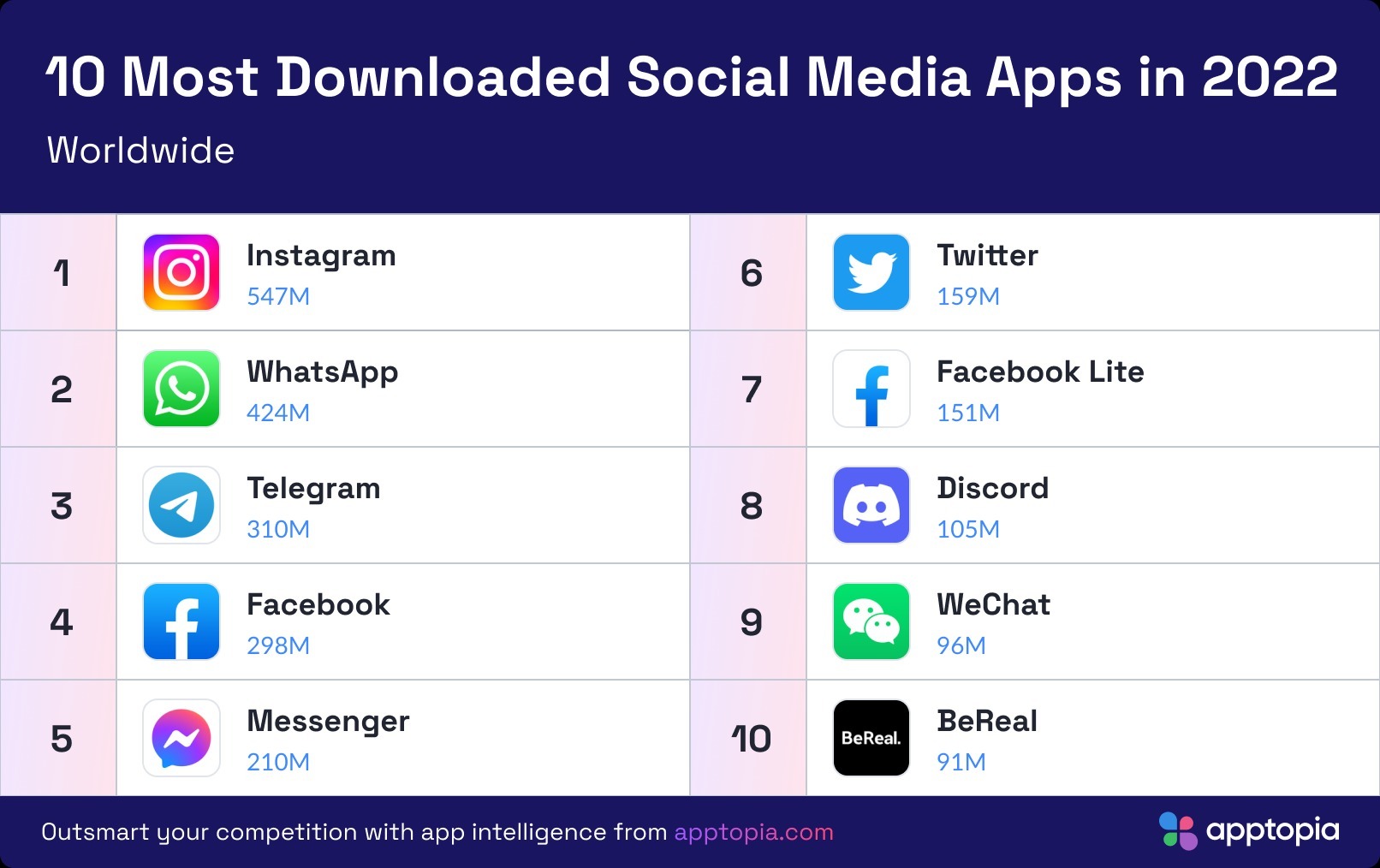 Apptopia unveils the 2022 report of the most downloaded applications in the world. As every year, the app comparator relies on data from App Store and Google Play Store figures globally. The only exception is data from China which is based on iOS only. Let’s discover together the evolution of the rankings by category!

TikTok remains the most downloaded app in the world

TikTok continues to seduce the general public. Like last year, the Chinese application finds itself on the highest step of the podium: it records 672 million downloads, against 656 million in 2021. TikTok is ahead of two other applications belonging to the Meta group: Instagram and WhatsApp. CapCut points in 4th position, it is the official video editing application belonging to TikTok. On the other hand, Facebook is in decline and loses 5 places in the ranking. This year, two game apps make it into the top 10: Subway Surfers and Stumble Guys.

Here is the evolution of the top 10 most downloaded applications in the world for the year 2022 vs the year 2021:

The French social network BeReal has been on the front of the stage throughout the past year: it is not a surprise to see it appear in this top 10 of the most downloaded social media applications in the world in 2022. In the absence of TikTok, Instagram stands out as the most popular social platform, followed by WhatsApp and Telegram.

To know: TikTok does not appear in this ranking because Apptopia listed it in the ranking of entertainment apps (see below).

In the “entertainment” category, TikTok takes the highest place on the podium, which was occupied by Netflix last year. The streaming platform is in 2nd position, followed by YouTube, Disney+ and Amazon Prime Video. Note that Twitch is out of this ranking (the platform was 8th in the 2021 ranking).

Namely: TikTok appears for the first time in this ranking of entertainment applications. Last year, Apptopia had classified it in the “social media” applications.

On the business side, messaging whatsapp business is doing well this year, and is ahead of videoconferencing applications: Zoom and Microsoft Teams. Other notable changes: the Chinese application Tencent Chat enters 4th place and Google Meet finds itself in 5th place (-3 places vs 2021).

Subways Surfers remains the most popular game in the world

On the gaming side, Subway Surfers seems unbeatable! This game, which has already existed for 10 years, is still experiencing dazzling success: 304 million downloads in 2022. A significant change this year: Stumble Guys dethrones Roblox 2nd place on the podium. Looking for Among Us in the global leaderboard? This multiplayer game, which experienced a certain enthusiasm during periods of confinement, came out of the top 10 this year.

Discover all the rankings on Apptopia


You can find our social media pages here and other related pages herehttps://yaroos.com/related-pages/