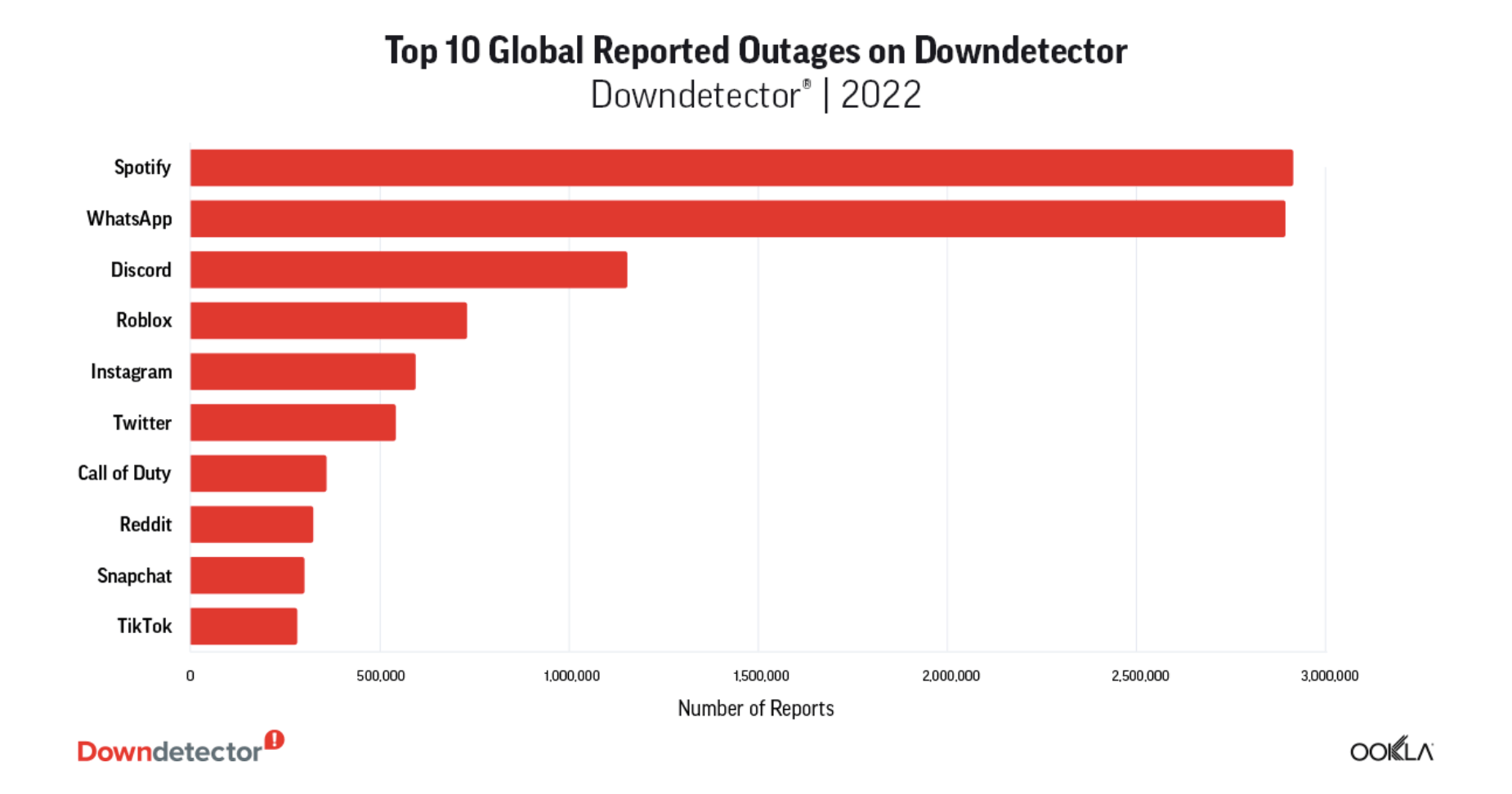 Downdetector makes it easy to report and track Internet service outages. To wrap up the year, the website shared its list of the 10 biggest internet outages of 2022. Guess which service took the top spot? Here is the complete list…

It doesn’t take long to have a huge impact when it comes to internet outages. For example, it was just two hours of downtime that propelled three services to the top of Downdetector’s list for the year.

A failure of the same cloud-hosted service discovery system on March 8 led to Spotify and Discord experiencing two of the three worst outages of the year. Meta’s WhatsApp arrived with the second worst outage of the year.

Downdetector categorized outages based on the number of reports it saw. Spotify just overtook WhatsApp from around 20,000 reports to over 2.9 million.

Taylor Swift also received an honorable mention from Downdetector for disrupting Spotify with the launch of her ‘Midnights’ album and Ticketmaster’s November 15 outage.

Interestingly, iCloud didn’t make the top 10! Even though it regularly sees outages, this is likely due to fewer users reporting the service down and not seeing a major outage like the services below.

Here is the complete top 10:

Here is an overview of the three main failures and details of Downdetector:

“March 8 marked a giant global outage for Discord and Spotify around the same time. While the outage only lasted around two hours, Discord users logged over 1.1 million reports on Downdetector as they patiently waited for the messaging service to come back online. During this period, people had to resort to voice calls to catch up.

“WhatsApp, owned by Meta, is one of the most important global messaging services that friends, families and businesses use to stay in touch and connect with the world. But on October 25, WhatsApp’s 2 billion users went into secrecy and couldn’t send any messages. Lasting around two hours, the WhatsApp outage generated nearly 2.9 million Downdetector problem reports, putting it second on our list for the biggest Downdetector outage of the year.

“Competition for the world’s biggest outage was extremely tight this year, with Spotify edging out Meta-owned WhatsApp from around 20,000 reports on Downdetector to just over 2.9 million reports. As mentioned earlier, March 8 was a big day of downed services. Spotify, the popular music streaming portal, experienced the biggest outage of the year that day, with users unable to stream their favorite music and podcasts for nearly two hours.

For more on the other big blackouts of 2022, check out Downdetector’s full report.

Check out this video below for more Apple news: