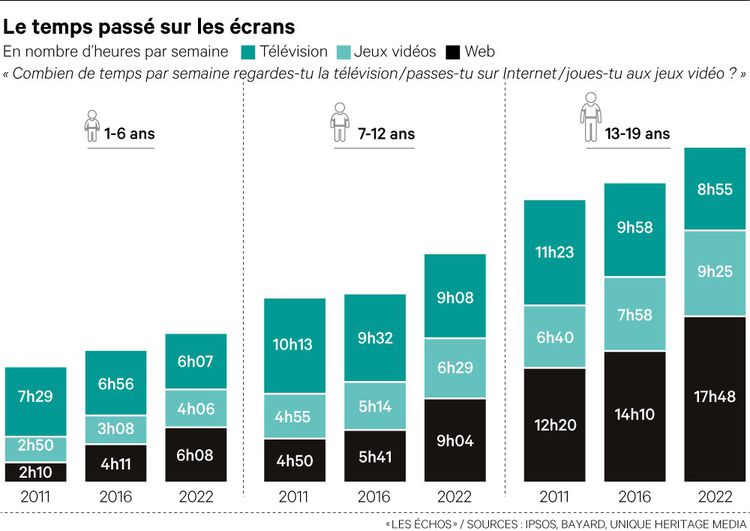 Children spend almost as much time – or probably more, depending on their age – on screens than at school.

The trend is particularly marked for teenagers . 13-19 year olds surf the Internet almost 18 hours a week, play video games for 9:25 hours and watch television almost 9 hours a week, according to an Ipsos study with Bayard/Milan and Unique Heritage Media .

Admittedly, the times cannot be accumulated so directly – since children can be on the Internet while watching television for example – but this gives a good overview of the weight of the screens. By comparison, the time spent in class reaches 26 hours per week in college.

And the trend is growing: children are spending more and more time on screens in general, and in particular on the web (via computer, tablet, smartphone, game console or television set). Between 2011 and 2022, the time devoted to the Internet has almost tripled for 1-6 year olds (from 2h10 to 6h08).

From now on, and for all age groups, children devote as much or even more time to the Internet than to traditional television. “This development is linked in particular to the multiplication of screens. There are 1.6 screens per child aged 7 to 12 and 2.9 screens for 13-19 year olds”, explains Bruno Schmutz, director of “media audience” at Ipsos. Thus, 9 out of 10 teenagers own a smartphone compared to 39% a decade ago.

This leak did not leave advertisers indifferent. Advertising investments (gross) fell by 6% in 2021 compared to 2019 and by almost 25% compared to 2018 on the youth screens of TF1, M6 and Gulli, according to Publicis Media.

However, this does not mean that our children no longer watch audiovisual programs. Watching videos is by far the most popular activity on the Internet. For 7-12 and 13-19 year olds, YouTube is the most used social network. It comes ahead of Snapchat and Instagram among the biggest.

This does not mean that children no longer read: the study clearly shows that they read the youth press and books en masse. “And even for screen addicts,” says Bruno Schmutz. For example, 7-12 year olds read an average of 3.6 books for leisure over the past three months.

Be that as it may, more and more voices are being raised to fight against overexposure to screens. The MP LREM Carolive Janvier tabled a bill – built with the support of parliamentarians, citizens etc. – providing for more prevention, but also the addition of mentions on the packaging of computers, smartphones, etc. to warn of dangers.

Instagram now allows parental control to monitor in particular the time spent on its application. As announced in December, the photo and video sharing platform has implemented several tools, available since Wednesday in the United States, which will then be deployed in other countries. They include the possibility of monitoring which accounts young people follow and especially the possibility of setting time limits. Meta (Facebook), parent company of Instagram, has also launched a site called “Family Center”, which gives advice to parents on social networks. Several voices have been raised lately on the impact of Instagram, especially young girls sensitive to their image, especially after the “Wall Street Journal” revealed internal investigations of Meta by testifying. Meta will also launch control tools on other services, especially in virtual reality.

The youngest spend 6 hours a week on the Internet, as much as on television