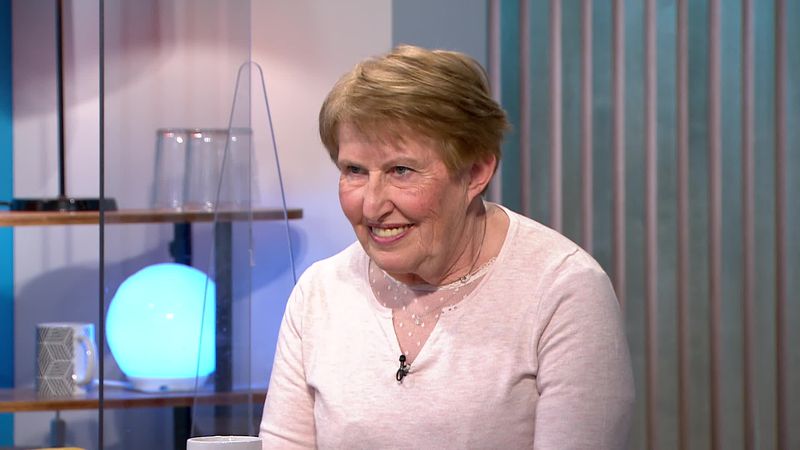 There are many forms of pollution. They are all the target of the action of the association chaired by Jacqueline Collard. A former researcher for industry, she fights every day against many scourges that are dangerous to our health. Water, air, waves… etc… she fights on all fronts, with a “formidable” determination, which she came to testify on the set of France 3 Auvergne Rhône Alpes.

A chemist by training, Jacqueline Collard is president of the SERA association (Health, environment Auvergne Rhône-Alpes), but she is first and foremost a very active activist, known for her many battles against electromagnetic radiation, soil pollution, air and water pollution linked to industry, notably.

Admittedly, Jacqueline was born in Virieu-sur-Bourbre in Isère, between Grenoble and Lyon, far from all the nuisances, a priori. ” Let’s say it’s not a place of intensive breeding or even agriculture. So there is less pollution “, she confirms. “ On the other hand, we see a lot of fog there, which nevertheless leads to a certain stagnation of pollutants. »

I had realized what the industry was capable of sending, either into the air or into the water. Things of which employees and local residents were not necessarily informed

As a child, Jacqueline wanted to become an architect. But the industrial environment of Grenoble grabbed its future and its orientation focused on chemistry. Researcher at Cnrs, She will evolve at Cerma (Centre for research on plant macromolecules). Without ambition, at the time, to change the world. ” At that time, it was a productivist approach, in an economic world that was doing well “, she summarizes. ” I worked in paper research. In the Grenoble region, the paper industry was at the forefront and connected with the Germans and the Canadians. »

After having worked for the industry for five years, she decided one day to become a teacher. ” I had realized what the industry was capable of sending, either into the air or into the water. Things of which employees and local residents were not necessarily informed “, justifies the researcher. ” For me, it therefore became important to transmit this information. »

So she literally changes…sides. ” When I did research, I realized what the industrial environment was, and what was left unsaid. This appealed to me a lot. It was a great disappointment, in particular to see that, whatever they were told, the industrialists did not have the priority of preserving people, employees as well as local residents..” She embraces her rebellious side. “ I come from a family of resistance fighters and activists. The inheritance is there! she smiles.

When she created the SERA association, fifteen years ago, she demonstrated innovation. ” People asked me what was the use of talking about environmental health. There were already health associations, and others for the environment. What was I doing in the middle? And I replied, precisely, that it was the link between the two areas that was not made », justifies Jacqueline.

In other countries, there is much more independence in research

His first fight was the fight against pesticides. ” The damage to the population was flagrant, in particular due to endocrine disruptors. And, very quickly, she goes on to the negative impact of magnetic fields. “ There was an explosion of mobile telephony with the installation of all the relay antennas. We were then strongly challenged by the population, but also by doctors who lacked information. And so I invested a lot in this area. »

In his viewfinder then find the telephone operators. ” Always the same ! she insists. The aim was to demonstrate the risk generated by their issuers. ” It has been demonstrated, but not in France. In fact, it all depends on who gives the money to do the research. In our country, it is the operators. So inevitably this is intended to finance only what they want to develop. In other countries, there is much more independence in research. Especially in northern Europe sums up our interlocutor.

In the end, she believes that very little could be denounced. ” The power of operators has become much greater, at the expense, in particular, of town halls, which have lost the ability to demand reliable protection for their inhabitants. The fight is therefore far from over. Jacqueline Collard shrugs her shoulders. ” We cling…she sighs.

It particularly focuses its action on disability. ” We participated in the consultation on 5G, with more than 500 pages of contribution. Nothing has been taken into account by the Health Security Agency. We find it surprising. »

And yet, according to this researcher, the scientific evidence of the dangers linked to these electromagnetic waves is well established, but abroad. ” Some countries have much more reliable research centers than ours “, she assures.

And yet, in France, the International Agency for Research on Cancer (IARC) has classified radiofrequencies as possible carcinogens for humans. ” You still have a multi-exposure. So targeting a pathology, which takes a certain number of years to develop, with a single component, is not reliable. », retorts the researcher.

For its part, the World Health Organization (WHO) has classified, since 2004, electromagnetic hypersensitivity in the category of environmental intolerances ” without explanation or known cause. Which does not satisfy this activist any more. ” In both cases, the information comes from thousands of studies, of which there is a consensus. It should be possible to check which studies are being referenced. She also mentions the slowness of publications. “ Between the reality on the ground, and the time when the studies are published, accompanied by this kind of very soft consensus, it is difficult for people… »

Among the developments obtained, we can mention the standards imposed on manufacturers around the SAR (Specific Absorption Rate) of each device. But, there again, not enough to reassure Jacqueline. ” This is a breakthrough obtained ten years ago. But we realized that manufacturers were not measuring it in the right place. Instead of measuring it in contact with the skin, they take it at one centimeter, which divides the exposure recorded by 10. So there, procedures in which we participate at the international level, are underway to prevent the marketing – or even withdrawal – of certain telephones. »

In the meantime, Jacqueline Collard goes, in particular, regularly to schools to make children aware of the dangers of mobile phones. And conveys a few simple messages. Like, for example, the advice not to leave your mobile phone in your pocket. ” When you do, you vibrate at the frequency of the mobile phone you receive, it’s simple,” she protests. “These are electromagnetic fields. By doing this, you disrupt your biological system. »

Another non-negligible risk: cell phone addiction. ” She crossed all limits. The systematic use – even in national education – of mobile telephony will very quickly pose a problem for a large part of the population. “Here too, the fight is far from simple” We had tried to ban mobile phones before the age of 16. To prevent them in the colleges. We didn’t get there. »

For Jacqueline Collard, everyone puts their heads in the sand. “ The children all have a cell phone, whatever their age. And parents, being the buyers of these tools, do not inform their children, and reassure themselves with good excuses. »

The list of struggles carried out by the SERA association seems endless. It also fights against noise pollution, and obtains some fundamental results: some standards have finally been put in place. ” In particular, in theaters. There were many accidents with people who often went to this type of place with much too high decibels. Their deafness was much more advanced than normal.”

Regarding the impact of endocrine disruptors, the researcher is not very optimistic. ” I feel like it’s a losing battle. We find them everywhere, in everything around us. They are in all plastics, clothes, and what we use every day. I don’t see how we’re going to be able to get rid of it by 2050. »

Especially since manufacturers do not seem ready to play the game ” They have no desire to remove them at all, falling back on recycling. But what is needed is not to put it. Which would mean that we completely change the manufacturing process. I’m not sure we can. »

In a lifetime of mine, I’m appalled to see where the glaciers are

Jacqueline Collard can still find something to celebrate as vice-president of the Association Atmo Auvergne-Rhône-Alpes. Progress in the fight against air pollution is notable. ” There has been a clear improvement compared to regulated pollutants, except for ozone, which is not yet regulated. And, above all, the WHO standards have been integrated into the objectives to be achieved. We hope that the Air directive will arrive quickly from the European authorities, to regulate all this. »

In the Auvergne-Rhône-Alpes region, the Arve Valley, in Haute-Savoie, however, remains a real source of concern. “ There are manufacturers who will not disappear overnight. So we can’t expect much. We are still trying to make people aware of the need to improve people’s living conditions. »

Especially since air pollution is not the only concern. “ In Chamonix, the consequences of climate change are deplorable. In the space of a lifetime of mine, I am appalled to see where the glaciers are. When you see what has become of the sea of ​​ice, it breaks my heart! »

REPLAY: See or discover the entirety of this program

Listen to the podcast of “You are wonderful”:

“The systematic use of mobile phones will very quickly become a problem for a large part of the population” according to Jacqueline Collard, researcher (PODCAST)