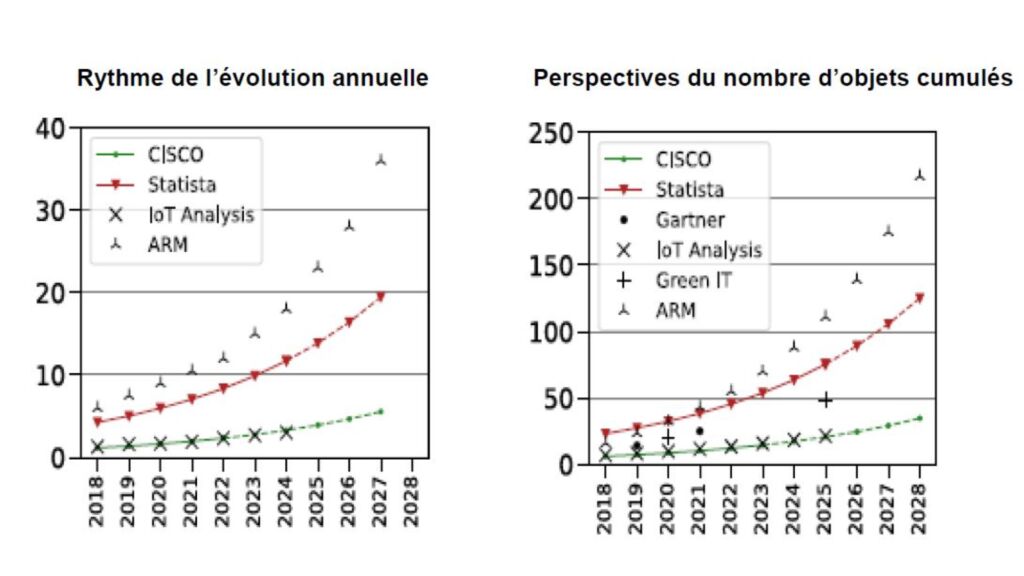 A broad term, often used in the business field, the Internet of Things (IoT) can also be the subject of certain fantasies. Nothing very futuristic there; truth be told, we’ve been living in an Internet of Things society for several years now. Admittedly, the IoT has not exploded as much as expected, but growth forecasts are still optimistic. Welcome to the world of everything connected.

The simplest definition to give to this term Internet of Things is as follows: it designates the networking, via the Internet, of physical objects which, as a result, collect and share data.

The word “object” can lead to confusion, since the general public would tend to associate with it only what are referred to as connected objects, with a vision of everyday objects, such as connected wristbands, smart watches, smart lights, etc. We could prefer the term, more widespread in the world, ofInternet of Things (IoT) or Internet of Things.

The “things” can be a person, a building or an object, which will find itself connected to a vast network by Internet. Projecting this notion of IoT onto everyday connected objects that we know is not a mistake in itself. It is mainly in this segment that the consumer IoT is deployed, moreover. But it takes off and finds a very important use in professional branches, such as factories or hospitals.

The number of connected objects in France

In its 2021 report on the digital economy in the world, the United Nations Conference on Trade and Development (Cnuced) distinguished the Internet of Things among the 11 disruptive technologies, that is to say the technologies which replace another on the market, making the previous one obsolete. These disruptive technologies currently include artificial intelligence, 5G, blockchain or drone.

The principle of the Internet of Things has been around for a long time now, but really took off about ten years ago. Significant work was carried out on the subject at the time, predicting an explosion in the use of connected objects in the world. For example, a 2015 study by the Federal Institute of Technology Zurich predicted the presence in the world of 150 billion objects that could be connected to each other by 2025. Others predicted 500 billion.

The reality, however, is much more nuanced. It is very difficult to precisely quantify the number of objects connected to each other in the world. According to the sources, it is possible to establish a wide range – between 12.2 and 78 billion connected objects – currently. The Ecological Transition Agency (Ademe) and the Electronic Communications Regulatory Authority (Arcep) estimate their number at 1.8 billion in Europe, including 244 million for France, according to a report published in 2022 and commissioned by the ‘State. Not yet the expected explosion, but, with new protocols and technological developments, growth predictions remain very optimistic, despite a drop in it due to component shortages.

The Internet of Things in everyday life

To fully understand what we are talking about when we talk about the term Internet of Things, it is necessary to go into more detail on concrete cases.

As we said, the IoT is a galaxy of connected objects, making it possible to collect and share huge amounts of data. The Internet of Things surrounds us every day. The most obvious, yes, is fine the use we make of it in the house. Setting your heating remotely or scheduling it to turn on at a certain time is one use of the Internet of Things. The Linky meter is also part of this, since it collects electricity consumption data and shares it with both consumers and regulators.

In sports, the Internet of Things has taken a prominent place. The most professionalized sports have seen the presence of various and varied sensors multiply. GPS chips in the jersey to see a player’s movement data, power sensor to measure the force received during an impact, etc. Formula 1 cars, for example, can no longer operate without the battery of connected objects integrated into the vehicle.

However, it is the industry that benefits the most from the Internet of Things. We are also talking about IIoT, for Industrial Internet of Things. The term Industry 4.0, however, seems to steal the show since it first appeared in the mouth of former German Chancellor Angela Merkel in 2011.

The IoT in industry enables an astronomical amount of new practices and has greatly improved work and precision in factories. Machines can self-monitor and prevent problems. Inventory can be managed using sensors: if an item is about to run out, the system can automatically order new parts. We can also note its presence in the health sector, with devices capable of monitoring patients remotely.

If Renault and Google can design a digital twin of our cars in the near future is thanks to the Industrial Internet of Things. The system will therefore be able to analyze the behavior of the twin, to predict what it can do and to provide a solution upstream of the problem. This process is possible thanks to the dozens of intelligent sensors fitted to our cars and which collect thousands of data.

Strong limitations in use by individuals

One of the major brakes of the IoT in the world is probably the excess of distinct protocols which govern the interconnections. We can compare protocols, these lists of rules that allow efficient communication between objects in a network, to languages. As in the world, connected objects do not all speak the same language. It can then be difficult, in certain cases, to make the objects that one wishes to connect understand each other. The alliance of dozens of major global companies, however, offers hope. Google, Apple, Amazon, Samsung or Nanoleaf have started rolling out the new Matter protocolsupposed to make connected objects more easily interoperable.

The case of data processing is a subject of discussion. the washington post published a lengthy investigation last October, pointing out that Amazon’s connected objects were capable of collecting gigantic packets of data. In theory, the large companies present in the connected objects market have the capacity to know everything about us. The very concept of privacy is threatened by these new objects, and has also led us to question us about surveillance within one’s own household.

Security is taken seriously by governments: many laws are working to strengthen it to prevent the risk of hacking. The European Union has recently set up work around its Cyber ​​Resilience Actwhich should oblige manufacturers to guarantee sufficient security on their objects.

Finally, the growth of the Internet of Things in the world obviously raises environmental and energy issues. The report The World of the Internet of Things: dynamics to master published this year and commissioned by the French government, this thorny question does indeed arise. “To what extent do the environmental benefits of[Internet des objets] will they be able to compensate or even exceed the costs linked to the production of the objects, their energy consumption and the treatment of the waste they will cause? »

It’s a vicious circle. The Internet of Things is becoming more democratic, the demand for connected objects is increasing, billions of these objects are produced and put on the market, the oldest objects are thrown away and replaced by new ones, and so on. The major authorities and companies of this world will therefore, if they wish to see the continued growth and improvement of the Internet of Things, be brought to balance their proposals.

The Internet of Things is not limited to the connected home: our decryption


Discover our social media profiles as well as the other related pageshttps://yaroos.com/related-pages/