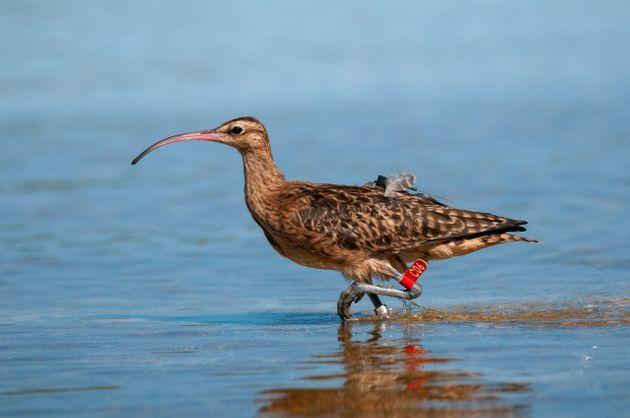 The ICARUS beacons (here placed on an Alaskan curlew) are the core of the “internet of animals” project (Photo: Kivi Kuaka)

ANIMALS – Ttechnology and nature sometimes go hand in hand. If generally these two terms are opposed, a new project entitled ICARUS tries to demonstrate the contrary. The goal? Create a huge bio-location network bringing together no less than 100,000 animals equipped with tags in order to be able to follow theevolution of climate and ecosystems.

Started in September 2020, the study is explained in the April edition of the journal Trends in Ecology & Evolution. It all started with a blackbird. The bird is indeed the first animal to have been equipped with a new type of beacon called ICARUS (acronym for International Cooperation for Animal Research Using Space). The latter transmit their data to an antenna placed on the International Space Station (ISS).

Much closer to the Earth (about 400 km), the beacon therefore needs less power and a smaller battery than if it were transmitting to a satellite. ICARUS beacons are then smaller, lighter. It is therefore easier to place them on smaller animals, generally migratory birds.

Thanks to this, the researchers intend to create a real “Internet of animals”, whose applications will be multiple. They hope to be able to prevent certain disasters such as storms and hurricanes, but also to protect biodiversity by fighting against illegal deforestation, poaching, etc.

Of course, these sensors can cause discomfort to the animal. Nevertheless “each beacon is made to be as discreet as possible”, explains the HuffPost Romain Lorrilliere, researcher at CESCO. The latter also works with ICARUS models as part of a similar French program, the Kivi Kuaka project.

The war in Ukraine complicates matters

The war in Ukraine led to a halt in research using ICARUS beacons, such as the eponymous project led by the Center for Biodiversity at Yale University in the United States and the Max Planck Institute of animal behavior in Germany.

Indeed, the beacons transmit to an antenna installed on the Russian part of the ISS (for technical reasons). However, with the current conflict, any partnership with the Russian agency responsible for recovering the data has been stopped. The Internet of Animals is not, however, stillborn, as Romain Lorrillière explains: The project “is not stopped in its philosophy, but it is at a standstill”.

If there are no short-term solutions, the deal is different in the medium term. The researcher explains that by “the end of 2024, scientists (and those of the ICARUS project are involved) are working to develop a series of low-altitude satellites. This could make it possible to replace the antenna positioned on the ISS, while perfecting this system.

Once the animal is equipped, the beacon transmits a multitude of data (in particular GPS) which is freely accessible online on a platform called Movebank. Currently, sensors are deployed at 91 sites on all continents as shown in the tweet below:

According to Romain Lorrillière, “if we should see a final objective in this, it is the improvement of early warning systems”. Animals are indeed allies of choice in the collection of information in remote areas, which can help, for example, to solidify weather forecasting models.

The Internet of Animals would therefore be a meteorological aid tool, making it possible to more effectively identify future natural disasters. This seems particularly useful, as a new UN report explains that the world could soon experience more than one disaster a day.

An example of this contribution: tunas. Animals prey to heavy fishing causing fear for their survival, the latter could prove to be valuable allies in estimating the origins of hurricanes. Indeed, as Romain Lorrillière explains, “monitoring of tunas has shown that they seek warm waters full of fish) and which are the essence of hurricanes”.

The Internet of Animals would therefore be useful for us humans, but obviously also for the biodiversity. A study published in Nature explains for example that this system could predict the presence of poachers in the African savannah with about 86% accuracy.

An equivalent application exists at sea. To spot illegal fishing boats (which sail under radar), a study composed in particular of French researchers used albatrosses as sentinels. These different works are explained in more detail in the video below from the biologist and popularizer Léo Grasset:

Previously, scientists acquired knowledge more difficultly, accompanying animals in the field. But the Internet of Animals doesn’t mean everything will become computerized, with researchers looking at dots on a screen and chowing down on satellite data. Because it will always be necessary to set the beacons, and realize the reality on the ground.

Thus, Martin Wikelski, ornithologist at the University of Washington affirms for the New York Times that “this physical distancing (…) masks the deeper connection that wildlife tracking allows”. Optimism is therefore warranted, as the ICARUS beacons mark a real turning point for scientists in the analysis of ecosystems and biodiversity.

Always in the New York TimesWalter Jetz says it marks “a new era of discovery”, adding that “we’re going to discover new migration routes, new habitat needs, things about the behavior of species that we didn’t even have think”.

See also on The HuffPost: Extreme heat wave in India, a fire ravages a dump in Delhi and suffocates its inhabitants

This article was originally published on The HuffPost and has been updated.

The Internet of Animals, a revolution frozen by the war in Ukraine