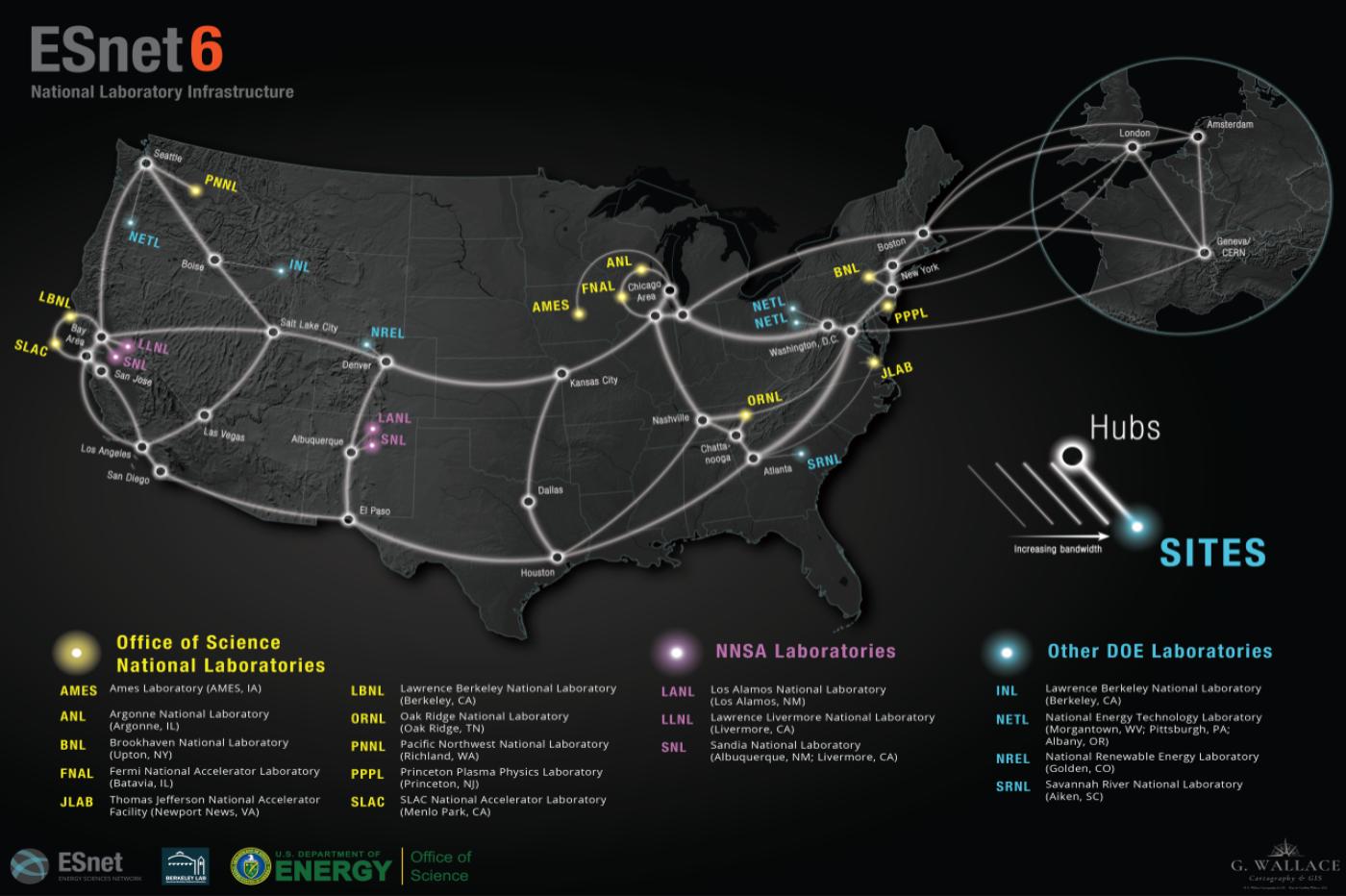 46 Terabits per second: this is the dizzying bandwidth claimed by the latest version of the American network ESnet.

Today, most Internet connections can achieve very comfortable speeds. Several operators even offer fiber packages for individuals that can reach 8 Gb per second in ideal conditions. But for cutting-edge scientific laboratories, the situation is still very different.

ESnet proved it again very recently. This is a network operated by the US Department of Energy (DoE); it uses it to connect various facilities that include several supercomputers and various state-of-the-art laboratories spread throughout the territory. They are connected by a huge network that now includes more than 20,000 kilometers of fiber optics.

It is one of the most efficient networks on the planet. Each of its branches is capable of reaching extremely high flow rates; the DoE usually says it’s the fastest large-scale operational network in the world.

And he has just further consolidated his position; with the arrival of the new version of the installation, baptized ESnet6, each branch can now transfer between 400 Gigabits and 1 Terabit per second. The network as a whole now supports a total bandwidth of 46 Terabits (i.e. 46,000 Gigabits) per second and permanently!

Not a transfer speed record

However, an important distinction must be made: it is indeed a bandwidth record, not raw data transfer speed. In the latter category, the record belongs to a facility at NCIT, a Japanese research center. They managed to achieve a throughput greater than 1 Petabit/sor more than one million Gigabits per second (see this article).

The fundamental difference is that it is an experimental system which remains for the moment confined to research; nothing to do with ESnet6, in short. The latter is already used daily by hundreds of researchers affiliated with US federal agencies. That makes this bandwidth record all the more impressive, since it’s not an abstract proof of concept.

The DoE staff also believes that the arrival of ESnet6 represents a major paradigm shift for network architectures applied to research. According to HPCWorld and HPC WireAmerican engineers collaborated with AMD to implement an architecture that is flexible, extensible and largely automated.

“ Before Esnet6, each element of the network was treated as a set of pets says Inder Monda, director of scientific networks at Berkeley Lab. Now they are considered a ” real herd with a real shepherd at its head: a program called Orchestrator. It is responsible for redirecting huge data flows dynamically, while reconfiguring the network in real time according to needs.

And these exceptional performances will directly contribute to the work of the researchers; ESnet6 will allow them to transfer, analyze and store mind-boggling volumes of data. And they will need it, knowing the amount of data produced by the simulators, telescopes, particle accelerators, genome sequencers, and other state-of-the-art devices that exist today.

“ As the complexity of scientific instruments and the resolution of supercomputers increase, the scientific community faces a growing challenge explains Barbara Helland, deputy director of the DoE’s IT department.

” We have exponentially increasing amounts of data, and we need to transport, share, and process them faster and faster. “, she specifies. ” With Esnet6, DoE researchers are equipped with the most sophisticated technology available to help them address challenges such as climate, renewable energy, semiconductor production, quantum computing… Suffice to say that American researchers are already rubbing their hands.

The fastest Internet network in the world broke its own record