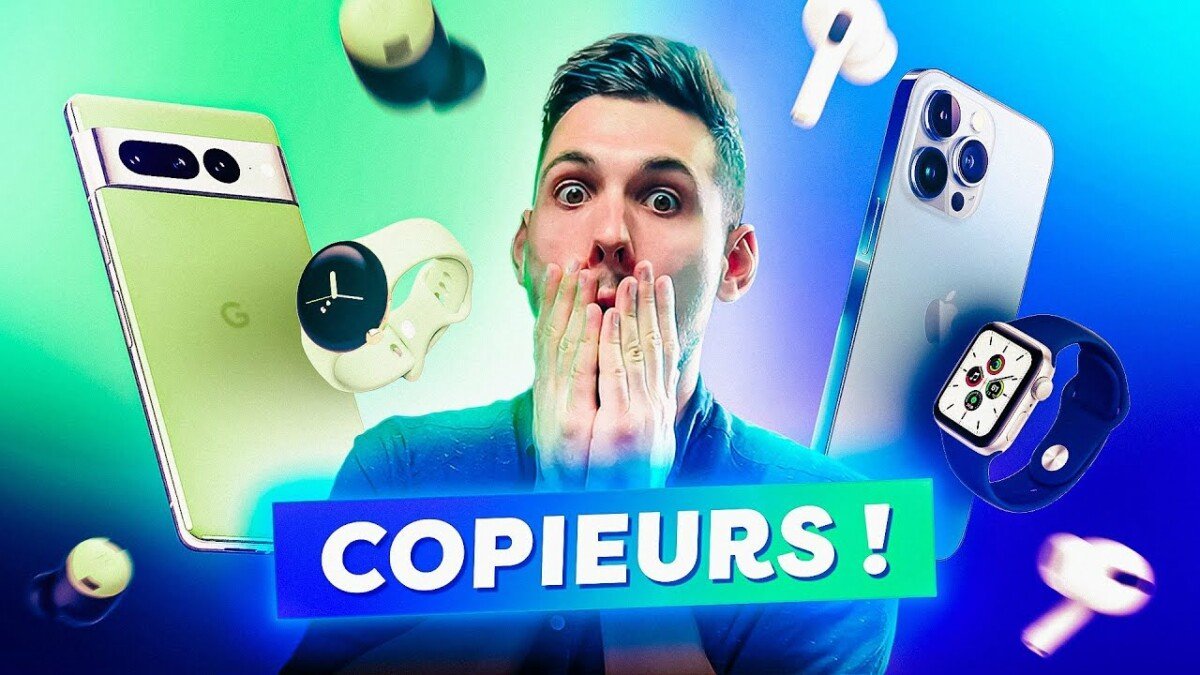 It’s a bit of a game with each big announcement: identifying borrowings here and there. During the Google I/O, we didn’t have to look far for inspiration from Google.

Last week was Google I/O 2022, the major annual conference dedicated to developers. The announcements were much more numerous than expected, because it was not only aboutAndroid 13. Among the novelties, macophiles will not have failed to make a few remarks on the inspiration of Google.

First coarse borrowing, it is about Google Wallet. After Android Pay, then Google Pay, Google has renamed its NFC service to Google Wallet. The inspiration is not only that of the name, Apple Wallet (Apple Cards in French), but also of the new functions.

Google wants to add other elements, such as hotel room keys, company badges, but also identity documents and driving licenses in certain countries.

For the umpteenth time, Google is trying to break into the tablet world. You may or may not remember Honeycomb. It was a version of Android designed specifically for tablets…we can say that Google’s attempts failed, because Apple took a big step ahead with iPadOS.

With Android 13, Google seeks to change things by taking a little inspiration from the experience of iPads. Among the new features of Android tablets are easy multitasking that lets you use apps side-by-side and new interfaces.to take full advantage of the extra space, including YouTube Music, Google Maps, Messages and more“. We don’t know if this will really hurt Apple’s tablet dominance, but hey, better late than never. Moreover, Google took the opportunity to make the teasing of its future Pixel Tablet.

Copy and paste between Android devices

If you have a Mac, iPhone, and iPad, it’s been possible to copy-paste things for a long time (Universal Copy and Paste) between devices easily. Google has finally announced a similar feature, again, better late than never.

Google has formalized its future smartwatch: the Pixel Watch. Regarding its launch, this connected watch will be available at the same time as the Pixel 7 and Pixel 7 Proor this fall.

In terms of design, we therefore find this screen both round and curved, as the sounds of the hallway had already suggested. The whole thing is completed with a crown. This crown will undoubtedly remind you of that of theAppleWatch… obviously.

Last year at Google I/O 2021, Google has shown it’s taking inspiration from Apple’s iOS privacy features. Everything that was said this year about publicity and privacy in this year’s keynote is also in line with Apple’s speeches.

“We minimize your data footprintsaid Vice President Jen Fitzpatrick in describing the philosophy “Protected Computingfrom Google: “If the data does not exist, it cannot be hacked.“. Android 13 will bring extensive controls over app access to your files on a phone.

Google will also experiment with better control over apps’ abilities to track what you’re doing. Your Google account should see the arrival of a new “The center of advertisements” which will allow you to better manage the type of advertising to which you are subjected. It’s not as radical as Apple, but it’s a big step up for Google.

In short, here we have shown you a visible face of Google, nevertheless the two hours and thirty minutes of opening keynote were full of novelties. Google is ahead in many areas, including artificial intelligence. For example, the keynote ended with a concept clip showing how Google’s work on real-time automated translation. With augmented reality interfaces, Google wants to transcend language barriers with new AR glasses. Yes, it looks like the Google Glass dream is alive – and does it still look great in a demo video.