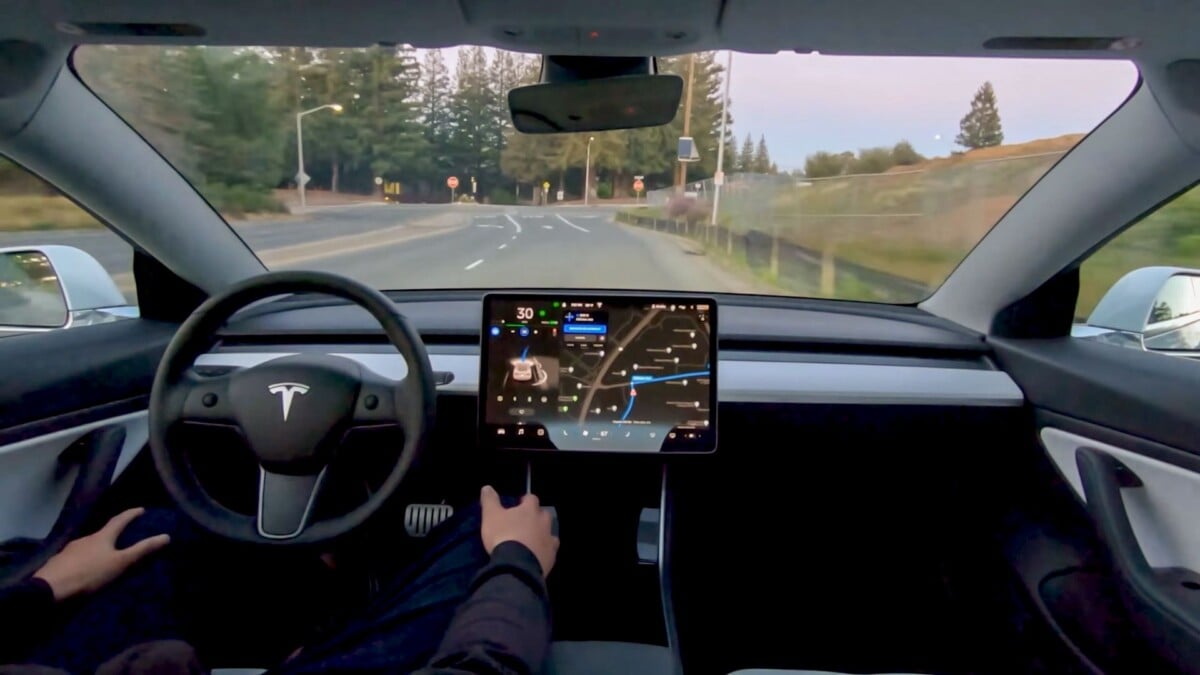 Elon Musk announced a few weeks ago that FSD (Full-Self Driving) autonomous driving was available to all US customers of the brand who purchased the option. The problem is that this announcement came at the same time as a spectacular accident involving a Tesla Model S. The video of the accident has just been posted online. But beware, there is not necessarily a causal link and we will explain why.

Until recently, the feature ” Automated city driving of Tesla (also called FSD to Full Self Driving) was only available in the US, for select customers. Elon Musk announced on his account Twitter November 24, 2022 that the feature would now be available to all customers who paid for the option. Chance of the calendar, it was on the same day that an accident took place involving a Tesla Model S a priori in semi-autonomous driving.

Currently sold for $15,000, the FSD allows Tesla (Model 3, Model Y, Model S and Model X) to drive completely autonomously, transporting the driver and passengers from point A to point. The car then makes all the driving decisions, and it’s quite impressive when you watch the videos across the Atlantic of 100% autonomous journeys. Like the following video.

However, the system is not legally recognized as totally autonomous, since it is the level 2 autonomous driving. And not level 3, like the Mercedes Drive Pilot systemyet less evolved than that of Tesla.

The consequence is that the driver of a Tesla remains responsible for driving his car, and must therefore continue to monitor the road and its surroundings. In other words, in the event of an accident, it is the driver who is responsible and not the manufacturer. At Mercedes, it is the opposite if the Drive Pilot is activated.

And speaking of an accident, Elon Musk’s announcement comes at a delicate time. Indeed, on November 24, 2022, a road accident involving a Tesla Model S, at first sight in autonomous driving mode, took place. The video of this accident has just been published by the media The Intercept.

We then see a white Tesla Model S which activates its indicator, changes lanes to get into the leftmost lane, then brakes suddenly. It follows a pile-up involving a total of eight carsand causing a few injuries. 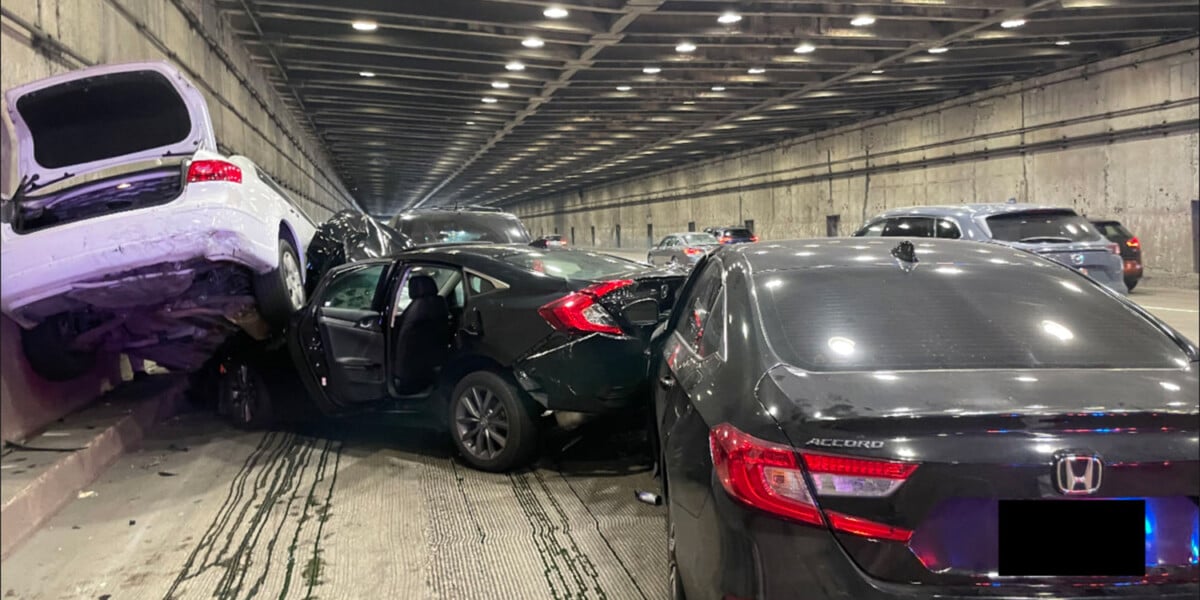 According to the police report that cites the driver, the Tesla was in “ Full self-driving mode“. The problem is that a priori, at the scene of the accident (the San Francisco Bay Bridge), it is not possible to activate the FSD according to the twitter account of Whole Mars Catalog. A regular FSD user in Los Angeles. Instead, only the mode Autopilot is available.

The user even thinks he knows why the Tesla would have slowed down so much at this precise location. The car’s GPS reportedly misidentified speed limits on the leftmost lane of the bridge, causing the car to slow to 25 MPH (about 40 km/h). In question: the presence of an exit upstream of the accident, as can be seen on the second angle shown on the second video. The car could then believe that it is on the exit ramp and not in the tunnel, in the absence of a precise GPS signal.

No accident for Tesla’s FSD?

Anyway, the most important information to remember is the fact that the car was, a priori, not in FSD mode, but in Autopilot mode. And the difference is major, since Tesla’s Autopilot is a “simple” adaptive cruise control coupled with lane keeping assistance. In the United States, and unlike Europethe Teslas can however make the decision to overtake on their own in Autopilot mode.

Whether in FSD, or in Autopilot, the driver reacted badly to this braking, which can be called phantom braking. This is when the car thinks it sees an obstacle and brakes to avoid it. In this kind of situation, which is studied closely by the NHTSA (the American road safety), the first reflex to have is to press the accelerator pedal. This cancels phantom braking.

On the video, we see that the driver completely let the car go and came to a stop, after being hit by another car. The driver should have accelerated at the first signs of phantom braking. Since as we can see on the video, no car was bothering him in front of him.

A problem specific to Tesla?

This accident could very well have happened to a car of another brand, since phantom braking occurs with many manufacturers, as shown by recent American road safety surveys. On the other hand, this accident is likely to slow Tesla down on autonomous driving, because Elon Musk wanted to be able to remove the obligation for drivers to hold the steering wheel in their hands when activating the FSD. Instead, to ensure that the driver is still conscious, the Teslas would only use the cabin camera, present towards the central rearview mirror.

This solution also seems more secure than the sensors on the steering wheel. These can be easily fooled, and there is no evidence that a driver who holds the steering wheel in his hands is actively monitoring the road. Conversely, by analyzing the driver’s gaze, Tesla can more easily tell if the driver is still aware of their surroundings.

Tesla: the safest cars in the world?

Yet another coincidence of the calendar: the video published by The Intercept was accompanied by two major announcements from Tesla related to road safety. The first comes from Euro NCAP: the European crash test organization awards Tesla’s Model S and Model X numerous prizes, thanks to their very good score in the event of an accident, but also on-board technologies to prevent these last. 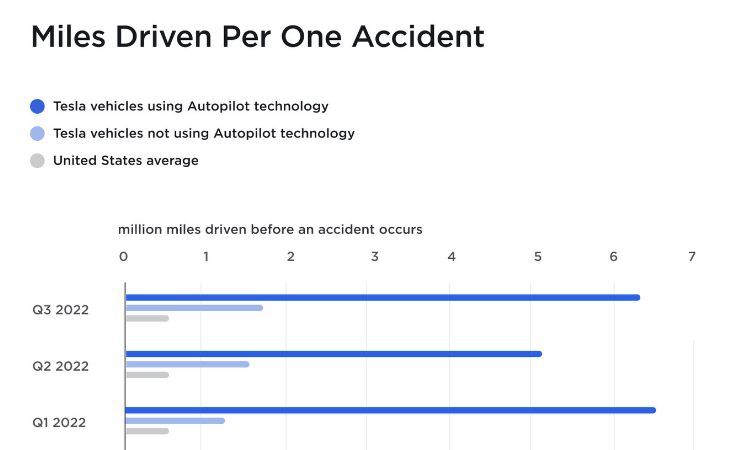 Tesla’s other announcement is the posting of accident figures for the American brand’s electric car fleet. This makes it possible to compare the accident rate of three types of models: Teslas with Autopilot activated, those without this feature and finally the rest of the cars in the American fleet. As with previous studies on the subject, Teslas are safer than other models on the road in the United States, and much safer when they have Autopilot active.

Tesla’s FSD system, which is still in beta today, is getting a welcome update for customers using this self-driving technology. Not everyone will be affected by…
Read more

Tesla: does this disturbing pileup call into question the title of the safest car in the world?