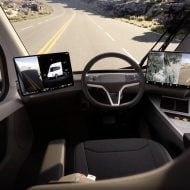 the british government appointed star link for a test so equip the most remote homes and businesses with access Internet broadband. The UK’s aim is to improve overall connectivity guaranteeing the entire population the reception of reliable coverage. An interesting project for Elon Musk’s company since he responds to his desire to provide high-speed Internet access worldwide.

A project that is part of the government’s plans

The test involves sending more than 3,000 satellites in low Earth orbit to see how they can help cover a dozen places” very difficult to reach “. The test will first be tested on three remote sites : 12th century Rievaulx Abbey in the North York Moors National Park, Wasdale Head in the Lake District and Snowdonia National Park.

In the same category
Tesla delivers its first electric trucks

This device is part of the £5 billion Gigabit project which is a government initiative aiming to remove “notspots”, i.e. places where internet is not available. The state believes that satellite broadband is an attractive option when, for example, the operators cannot install the cables. However, this alternative is the most expensive for consumers.

The British government considers that satellites can “ be the answer to the connection of isolated places “. Michelle Donelan, Digital Secretary said that “ these trials aim to find a solution to the prohibitive cost of deploying cables in remote locations “. In fact, satellites can provide Internet speeds of up to 200 megabits per second (mbps) in many places, it is four times faster than the current Anglo-Saxon average which is approaching 50 mbpsinformed the Department of Digital, Culture, Media and Sport.

The amount of the project with Starlink is not known

Recently, during the Russian invasion of Ukraine, Elon Musk supported the Ukrainians by delivering satellite dishes free of charge to allow residents to access the Starlink Internet network. However, the American billionaire said that he could not finance Starlink indefinitely. The cost of operations will reach nearly 100 billion dollars by the end of the year.

Regarding the British government, the amount of this project with Starlink is not known. Since 2020, the service that enabled businesses and individuals to connect to the Internet in Europe costs 90 euros per month for the subscription and 500 euros for equipment. Lately, Starlink has decided to cut subscription fees in half, which impacted the number of subscribers to the service according to Gwyne Shotwell, chief operating officer at SpaceX.

However, this choice has something surprising, the United Kingdom did not wish to collaborate with OneWeb. The latter is, like Starlink, a satellite broadband company in which the British, to save it from bankruptcy, have invested more than $500 million. The government has indicated that it prefers to opt for technology that is available and ready to use “. Indeed, the outbreak of war in Ukraine put an end to the plans of OneWeb which can no longer collaborate with Russia. It is therefore SpaceX which has approached the British company to enable it to send its satellites into orbit.

What are the different ways to create a website? -
Joe Biden calls for cracking down on social networks that don't protect their users enough
The fight against wildlife trafficking goes through e-commerce sites
Tweet
Share
Share
Pin