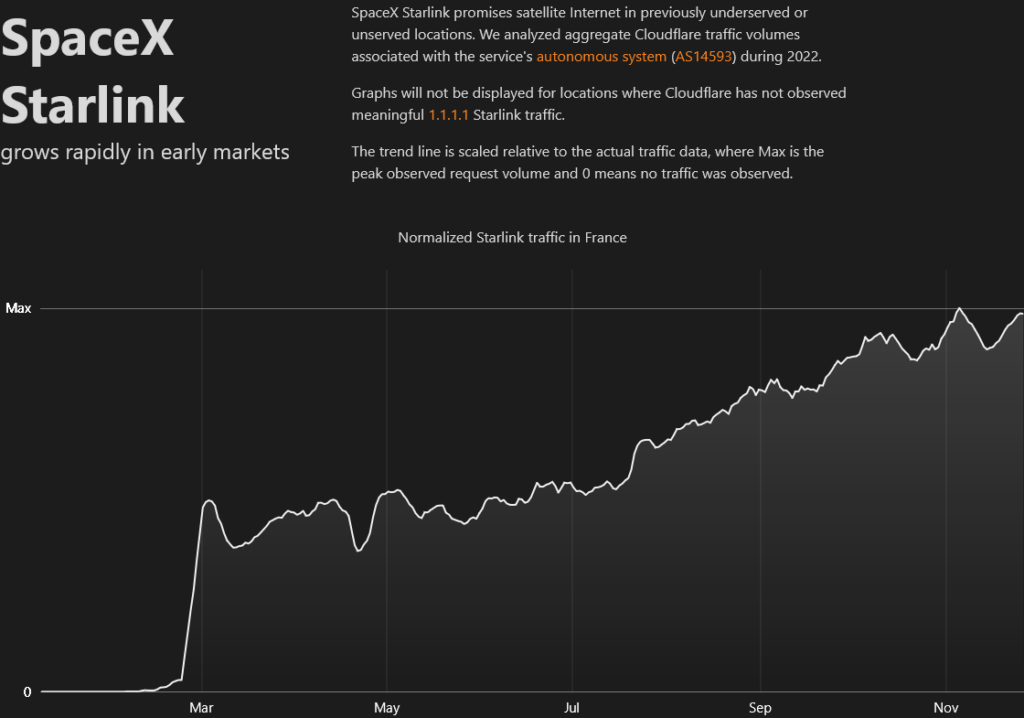 100,000 customers claimed in August 2021 and now over a million, according to a waypoint provided in December 2022. According to SpaceX, its satellite Internet access service — star link — is progressing well. The operator is now present in many countries : in North America, Europe, Japan, Australia, New Zealand and various other territories, especially in South America.

This tenfold increase in the number of customers has an obvious repercussion: traffic Internet that passes through Starlink has increased significantly in recent months. In fact, it even exploded in 2022, according to the observations of the American company Cloudflare, which markets solutions for websites and online platforms. In December, Starlink’s traffic increased 15 times compared to January.

” Starlink is not yet available worldwide, but traffic is growing. In Ukraine, Starlink provided backup internet connectivity during the Russian invasion. Traffic spiked in Romania after the service launched there in May, and in the United States traffic grew steadily throughout the year », notes Cloudflare. It is possible to observe the situation country by country by choosing one on Cloudflare.

In the case of France, Starlink traffic was considered non-existent at the start of 2022, according to Cloudflare’s radars. It was from February that the curve began to rise, with a significant take-off with the arrival of March. Since then, traffic has generally continued to increase, despite a noticeable drop around April (which occurred at the time mess about the frequency allocation procedure, resolved in early June).

To analyze Starlink’s traffic, Cloudflare analyzed traffic volumes related to the autonomous system AS14593, which is precisely related to SpaceX. The Internet is, it should be remembered, made up of a multitude of disparate networks capable of communicating with each other using common protocols. The results were then normalized on a graph ranging from 0 (no traffic detected) to 1 (maximum traffic measured).

Starlink explains in its information pages that the speeds provided by its service vary from 20 to 100 Mbit/s for the general public (peaks of 250 Mbit/s can be offered within the framework of specific, more expensive formulas). Regarding latency, it is promised between 25 and 50 milliseconds. The lower this value, the better. These values ​​are given as an indication. In reality, throughputs and latency can be affected by a variety of factors.

In addition to the significant increase in the number of customers worldwide, which largely explains this increase in Internet traffic passing through Starlink, there are two other factors to consider. The special case of Ukrainewhich relies heavily on the operator to stay online, but also the expansion of services (access in planes, in the boats, in the caravans), which make it possible to use Starlink in new situations.